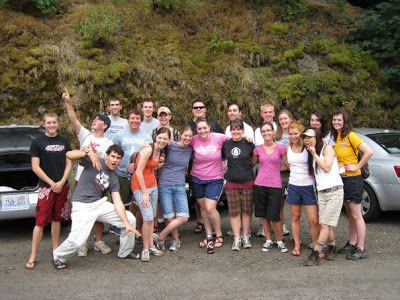 I distinctly remember the day I met Nate.  I was a silly nineteen year old, beginning my second year of college.  He was one of the new guys at Multnomah, back in the States after having spent his first year out of high school in Sweden (yes, I do still deal with jealousy issues over that).

Nate’s dorm section was the brother section to mine and, as a welcome back event, our RA’s decided we’d all go on a really cool hike.  Somehow I ended up in a car full of guys I didn’t know.  Of course, being the slightly boy crazy girl I was, I didn’t mind it at all.  I started getting to know the guys, wondering to myself if my future husband was one of them (did I mention I was slightly boy crazy?).  Little did I know, my hubby was sitting right next to me! When we got to the trail I ran off with a bunch of friends, wading through the creek and climbing over fallen trees to get to the waterfall.  Nate, on the other hand, took the trail slower, helping some of the girls get through the tougher parts.  He says he was being a gentleman.  I say he was looking for a wife.  (Maybe I just say that because it makes me feel better about my 19 year old self.)

Throughout that year, Nate and I became great friends.  We were both in the Intercultural Studies program so we had a lot of classes together.  We also had a ton of mutual friends so we hung out a lot!  We’ve come to discover that throughout that year we were each interested in each other at different times (possibly even the same time).

The end of that year, Nate was going to ask me to go to the Junior/Senior Banquet with him, deciding it was high time to begin pursuing me.  Unfortunately, before asking me, he found out I had already been asked by someone else.  He was disappointed but decided to bide his time – knowing that the guy I was going with wasn’t someone I was interested in.

We both were hired to be RA’s for the following year.  It was fun to know that we would be working together and Nate, figuring it was a perfect excuse to spend more time with me, asked me to be his sister RA.  I was exited about working closely with him but, problem was, I was being pursued and soon after began dating another guy.  Nate was obviously bummed but still knew he’d have fun working closely with me.

That first semester we were RAs was a blast!  We had so much fun planning events together.  I see now how perfect it was that we had that time to get to know a lot of  each other’s strengths and weaknesses before we were dating.  Even at that point in life I was already teaching him to plan ahead, think through the small details, and throw fun events and he was teaching me to go with the flow, not stress things so much, and think through the big details.  We got to see each other’s relationships with Christ and discover each other’s passions and life goals.  During this time we even talked about other relationships – me telling him about my long distance boyfriend and him telling me about and getting advice about the girl he liked.  We truly were just friends, it wasn’t ANYTHING more than that.

In November of that year my relationship ended pretty poorly.  It was very hard for me, but it was such a blessing to have great friendships with Nate and the other guy RAs who truly showed me that boys weren’t all dumb stinkerfaces (Yep, I’m mature).  That relationship had taught me so much, though, and looking back I know that God had used it to prepare me for my relationship with Nate.  It cured me of my boy craziness, really solidified what I wanted to do with my life, and taught me a lot about what I was looking for in a guy.

The second semester of that year, I was truly at a place where I was, for the first time in my life, totally fine with being single.  I remember telling a friend that I really didn’t think Multnomah was the place I would meet my future husband and that I was thankful for that because I didn’t have to worry about it anymore.  Not constantly thinking and worrying about that was such a weight off my shoulders.

The girls in my dorm section (and a few guys in Nate’s) didn’t listen to that and thought it was hilarious to call Nate and me “mom” and “dad” since we were their RAs.  (Yes, sometimes it felt like we were parents – freshman are crazy!)  My girls told me all the time that Nate and I should get married since our family was dysfunctional without it.  Nate and I thought it was pretty funny to hear “mom” or “dad” being yelled at us at random places around campus (who would have thought that someday we’ll really be “mom” and “dad” to kids!) but, at least on my end, it wasn’t going to happen.

Finally, the Junior/Senior Banquet rolled around again – exactly a year after Nate had originally planned on asking me.  I was graduating after the fall semester the next year so it was my last JSB.  I remember talking to my mom on the phone and telling her I was going to go with a date.  She, being logical, asked what I would do if I didn’t get asked.  I laughed and told her that I’m a strong, independent woman and could ask someone myself if no guy was gutsy enough to take me.  When she asked who I would ask, I told her I’d ask my brother RA, Nate, since I knew he wasn’t going with anyone yet.

Nate, on the other side of things, originally asked another friend to go with him but she wasn’t able to (I’ve been meaning to thank her…  I should do that).  He then decided that he’d do what he had been planning to do the year before and ask me.

So, one night, sitting in my room, in my pajamas, I get a call from our friend DJ, asking if he could borrow a book.  It was a super weird phone call for multiple reasons (we didn’t have an assignment due anytime in the near future, for one thing) so I figured there must be something up.  My roommate was certain someone was asking me to JSB (not DJ since he had a girlfriend – now his wife!) and, as soon as I left, she ran around my dorm section, getting all the girls together to bombard me once I got back (they were all SUPER excited).  I gave DJ the book and, just as I had expected, he told me he didn’t really need it.  He said that I needed to go to the music department’s practice rooms on the other end of campus.  When I got there, Nate was waiting with his guitar and played me a super cute song, asking me to go the JSB with him.

At that point, I still had no clue he was interested in me.  Naïve Susannah thought we were just friends going to the dance.  Little did I know what would come of our going to the Junior/Senior Banquet together…