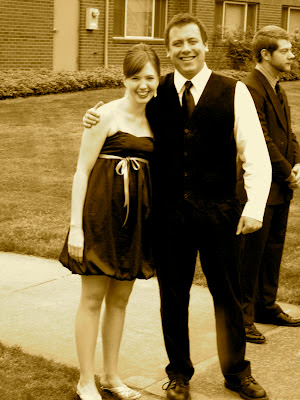 Part two of our love story.  See part one, which left off with me thinking our Junior/Senior Banquet date was just a friends thing…

Junior/Senior Banquet was tons of fun!  I had a blast swing dancing the night away, spending time with lots of friends, and looking all pretty.  It quickly became apparent to me that this wasn’t simply a friends thing.  But then it became quickly apparent that it was.  Then that it wasn’t.  Then that it was…  I just couldn’t make up my mind.

After that night, things changed for us.  It seemed as though Nate was everywhere I was.  He constantly was asking if I wanted to study together for finals.  He’d come by the girl’s dorm during my front desk shifts and hang out with me – playing cards, watching movies, or just talking.  It became pretty clear that he liked me.  Problem was, I didn’t know how I felt.  He was a wonderful guy and a great friend but I was content being single.  I had told God I was thankful for being single.  I WANTED TO BE SINGLE!!!

After the final in our Hebrews-Revelations class (the one that all of a sudden Nate needed a study partner for) I left the room and got on my cell phone, calling a potential summer job situation back.  Nate followed me out the door and into the student center (yeah, kind of stalkerish.  haha).  The way he was behaving, I knew what was coming – he was going to be asking me to go somewhere to have “the talk.”  I knew it but I still didn’t know how I felt about it.  I was pretty sure I was going to say no.  I should say no.  I wanted to say no.  My phone call ended.  Nate asked me to grab coffee with him.  I said yes.

Nate took me to this great coffee shop near campus called Seven Virtues.  While we got our drinks and sat down, my mind was reeling.  I didn’t know what was going on.  I didn’t know what I wanted.  I didn’t know anything!  I honestly couldn’t tell you if we chatted for a while or if Nate got right to the point.  All I remember is that Nate’s hands began to shake all of a sudden and his voice got all quivery.  I knew we were going to have The Talk.

My heart began singing!  Nate really did know me well.  He knew I wasn’t ready to be in a relationship.  I was so relieved that he wasn’t giving a big “we have to have titles and seriousness and rush into a relationship” talk.  He then asked me if I was ok with all that and ok with him continuing to pursue me.  I answered “I wouldn’t be opposed to that.”  “I wouldn’t be opposed to that”?  What kind of answer was that?  Nate’s come to learn that answer means “yes… but I don’t want to say that because it sounds over eager… and I don’t completely know if I can trust you… but I think I can… but this is scary for me and I don’t know what to say… and this seems to be an ok non-committal thing to say.”  Yep, who would have thought those six words meant so much.  (Keep your eye out.  Those same words come up again later.)

That conversation was a week and a half before school got out.  That weekend we went on the Senior Retreat at the Oregon Coast.  It was so much fun to be able to spend a weekend doing absolutely nothing other than spending time with friends, walking on the beach, and reading on the deck.  Nate, DJ, and I drove there together and spent most of the weekend hanging out.  (Sorry you were stuck with us, DJ!)  He had to leave a day early, though, so Nate and I drove back together by ourselves (scandalous, I know!).  It was such a great car ride, talking about some deeper stuff, and I found a lot of my hesitations slipping away.

I definitely had my panic moments during this last week and a half.  I remember one night going into my friend Jess’s room and sitting with her just bawling and talking because I didn’t know what I was doing.  Nate and I had planned on going for a walk later that night so, after cleaning myself up a bit, I went and told him all that I had just been bawling about.  I was already learning I could trust him.  That week we went on lots of walks, out to dinner, to a bonfire, explored his church building (it’s basically a castle), and we got to have tons of good conversations.  Yes, that’s what seniors do when they take finals a week early but have to stick around because they’re also RA’s.  🙂

Finally, the moment came that I had to commit to something.  My mom and dad were coming down to Portland to pick me up for the summer and my mom asked if they could meet Nate and take both of us out to lunch.  Once again, I went crying to Jess’s room, asking her what I should do.  She was wise and listened but didn’t give me an answer.  (Although she was definitely rooting for us!)

The night school got out, Nate and I went out with a bunch of the RA’s and, knowing it would be the last time I saw him until the next school year, I bit the bullet asked if he wanted to have lunch with my parents and me the next day.  He’s since told me that’s when he knew he was “in”.  Why else would he get to meet the parents?  We had lunch with my mom and dad (it went well) and as I was leaving, he handed me an envelope with the sweetest letter I had ever received.  It made my heart so happy that this guy truly cherished me already.  (Yes, of course I still have it!)

I spent the summer in Spokane and got to live with my best friend for the first half of it, before she got married.  Nate and I spent hours on the phone together and it really solidified in my mind that this was a guy I wanted to date (and potentially marry).  When he asked if he could come visit me and meet the rest of my family, I said yes.  Nate made the six hour trip (he may or may not have made it in just under five) to visit.  It was a wonderful visit and included a trip to Riverfront Park where he asked me to be his girlfriend.  I happily answered “I wouldn’t be opposed to that.”  (Remember that I said to watch out for those words again)  And no, I didn’t say that on purpose to be funny.  I wish I could say I did.  I just still wasn’t completely ready to open my heart up to him yet.

Eight months later another conversation happened on that same bench that I’m happy to say did not end with the phrase “I wouldn’t be opposed to that.”  But that’s another post…