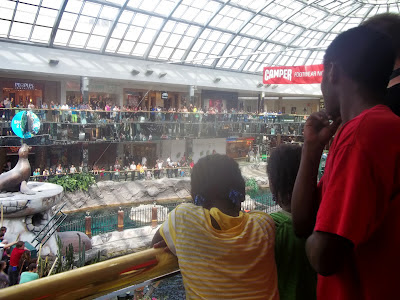 August 31, 2012
After the wedding, Nate and I joined my family for a trip over to Edmonton.  It was so good to spend time with seven of my brothers and sisters, my parents, and my uncle.
Of course, the main reason for the time there was to visit the Edmonton Mall.  I’m not going to lie, the mall aspect of it disappointed me.  It really was no bigger or better than the average mall.  Now all the extra stuff, that was amazing!  Where else can you watch a sea lion show inside a mall? The majority of the day was spent at the indoor water park.  SO MUCH FUN!  I couldn’t believe how many slides, hot tubs, kiddie areas, and river runs could be in one spot.  And the wave pool was HUGE!  I’m so glad I got to share the experience with tons of my siblings.  That just made the day even better.
For lunch we all broke up and did our own thing.  Dinah and Leah came along with Nate and me and, because of that, got to go to the amusement park part of the ride.  It was expensive so they only went on one ride but they still had a blast.
Time Driving: 6 hours
Once our time in Edmonton was done, Nate and I drove down to Seattle.  We stayed overnight in Kamloops just to break up the trip and arrived at our friends, Wes and Amanda’s, house around four.
Time Driving: 14 hours
That night, Wes insisted Nate and I take their scooters out for a ride.  Remember when we did that before? Well, this time I wasn’t wearing quite so many clothes because it was much warmer out.  When we started our ride I remember thinking that I should go back and put on jeans and closed toed shoes in case something happened but I didn’t.  And yes, something happened.
At an intersection without any other traffic, Nate decided he wanted to turn the other way than he originally planned and he scooted on over to the other lane.  I went to follow him but I guess the bike didn’t like that idea.  I don’t know exactly what happened but the bike ended up tipping over with me going only about 3 mph and landing on my leg.  My first thought was “What’s the damage to the bike?”  I then realized my ankle was hurting and looked down to see a not too bad cut on it.  I then noticed I had skinned up my knee and elbow a little bit.  Finally, as I got the bike off me, I noticed blood trickling down my leg from my upper thigh.  (I told you I wasn’t wearing enough clothes)  I couldn’t really feel it yet, but it was cut pretty bad.  One spot in particular looked like I might need stitches.
Neither Nate or I had our phones on us so we had no way of getting a hold of Wes or Amanda.  We pulled the bikes off the road to think about what we’d do as I put pressure on the worst scrape.  Multiple people pulled over at that point, asking if we wanted them to call an ambulance.  I laughingly thanked them and explained to them that it looked so much worse than it was and that I had walked fine off the road and could get to the doctor on my own if need be.
Since there was a bench off the road where we were, I hobbled over to it and sat, waiting for Nate to run back to the house and grab a car.  At this point, I looked the bike over and saw that the only damage done was a broken mirror and a scratched paint job.  I felt so relived! (I later found out the bikes were under warranty for accidents so it ended up costing no money to repair it)  It was at this point, when I was sitting on a bench all alone, that I finally began feeling the injury.  IT HURT!  I sat there singing to myself to keep my mind off the pain.  I’m sure if anyone had seen me they would have thought I was going into shock or something.  Haha.
Wes and Nate arrive and I get back to their house to get it cleaned up.  We were all amazed with how much blood was on my leg.  It looked horrible!  Once I washed the blood all off, we thankfully found that the cuts themselves weren’t too bad.  Nate and I decided that even the bigger cut didn’t need stitches.
As soon as we knew the wounds weren’t that bad, Nate goes and grabs my camera, telling me he’d take pictures so I could blog about it.  I love my husband.  🙂 See, once they were cleaned up they weren’t that bad.
The next day we all went to the lake so the boys and Addy (Wes and Amanda’s little girl) could go swimming.  I, of course, couldn’t with all my bandages. The rest of our last weekend of vacation included having dinner with Ben and Sarah who we love and wish we could live nearer to, drinks and pool with Joel, breakfast with Joel and Mark, and a trip out to Nate’s grandparents farm, and dinner with Jess, Alicia, and their four wonderful children.  We wished it could never end!
Finally, Saturday night, we reluctantly loaded up our car to head back to Portland.  It was a bittersweet ending to an amazing vacation!
Drive Time: 4 hours
Altogether, our total time driving was…  50 HOURS!!!!  I’m impressed that we still love each other.  And that our car still runs.  🙂
Prev Post Next Post