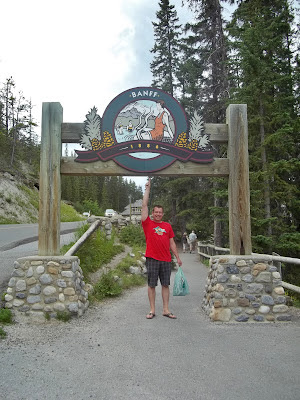 Banff National Park is such an amazing place!  I would have wanted to stay there forever except for the mosquitoes and LOUD trains at night.  Oh, and the people at the campsite next to us that didn’t understanding camping etiquette and were loud really late into the night and then really early in the morning.  Boo!

The camping trip started out stressfully for me since you can’t reserve camp sites in most of the park.  All the campsites that could be reserved were sold out even though we were camping Monday and Tuesday nights.  I don’t like just driving and hoping we’ll have a place to sleep but that’s what we had to do.  Thankfully, we got there and were able to get a great spot.
The first night we drove into the city of Banff and went to the hot spring there.  It wasn’t at all what I was expecting.  I thought it would be more of a natural-ish setting but it was basically just a warm pool.  Oh, well, it was a fun experience.  At this point my camera started going bonkers so I don’t have many pictures from a lot of the rest of the trip.  Every so often I’d be able to get a few and then my camera wouldn’t like me again. Bear with me, please.  🙂 While driving into the parking lot, we saw a bunch of people crowding around a deer.  I then saw a woman trying to put her four-ish year old daughter on its back.  Nate says my reaction was priceless.  Within about 2 seconds I went for my window to roll it down, thought better of it, got a really flustered look on my face, and loudly said (ok, maybe yelled) “Don’t be dumb.  Don’t put kids on wild animals.”  Unfortunately, Nate’s window was rolled down so the people totally heard me.  All I can hope is that my embarrassment saved a little girl from being injured. There was so much wildlife in the park!  (Makes sense, it’s nature!)  In the course of the trip we saw two black bears (one within about half a mile from our campsite.  Kind of scary), multiple deer and elk, a bighorn sheep, a moose, and a coyote.  All along the road people would be having what we referred to as “pull over parties.”  There would be usually about four to six cars stopped in one place and then we’d search for the animal everyone was looking at and taking pictures of.  It was lots of fun! Nate and I both just love how relaxing camping is.  We got up whenever we wanted, Nate cooked breakfast, and we just relaxed.  Thankfully, our campsite was next to a creek.  I usually have to sleep with a fan on to drown out Nate’s heavy breathing (or snoring if it’s allergy season).  I’m the world’s lightest sleeper!  We realized when we got there that there was obviously no place to plug in my fan.  If it weren’t for the white noise of the creek I don’t know how I would have slept. Right after this picture was taken I spilled my coffee all over my Bible.  I cleaned it off enough that none of the pages stick together but there’s a big coffee smear on a page in Deuteronomy and now that’s where my Bible wants to open up to.  The same thing happened in my old Bible in Psalms.  Maybe I should look and see if there’s something big God’s sharing with me on that page that I’m supposed to read whenever my Bible opens up to that page.  🙂 On the afternoon of our full day of camping we went to Lake Louise.  It was so pretty!  Most of the bodies of water in the area were a beautiful turquoise color and this lake was no exception. Right near this lake was a hike up to Lake Agnus Tea House.  It was a pretty difficult (for us) hike.  It was 3.5 km (about 7ish miles) and gained an elevation of 1,300 feet.  It also didn’t help that this area is the highest elevation tourist spot in Banff at 7,005 feet.  All that being said, we did so well!  I was so impressed with both of us!  The view of the lake from the hike was gorgeous!  This was about half way up. I was going for the “I’m conquering this mountain” look.  Also, I think my tennis shoes look really goofy with my outfit.  Please don’t send this picture to What Not to Wear.  Or do.  I’d love to get five thousand dollars to go clothes shopping. Nate and I didn’t even want to touch each other while taking a picture together because we were both so hot and sweaty. Finally we got a glimpse of the tea house.  Do you see it?  It’s really tiny – about half way up toward the right of the picture. Everything the tea house sells is hiked up the mountain and the garbage is hiked down.  It was incredible…  and expensive.  We both got (not very good) lemonade and it was about eight dollars.  It’s the experience that’s important, though.  We just didn’t get coffee that day and felt fine about spending that much. The scenery was just amazing!  I love nature so much! It was such a spectacular camping trip!  The next day we packed back up and headed to Grand Prairie for the WEDDING!!!
Prev Post Next Post