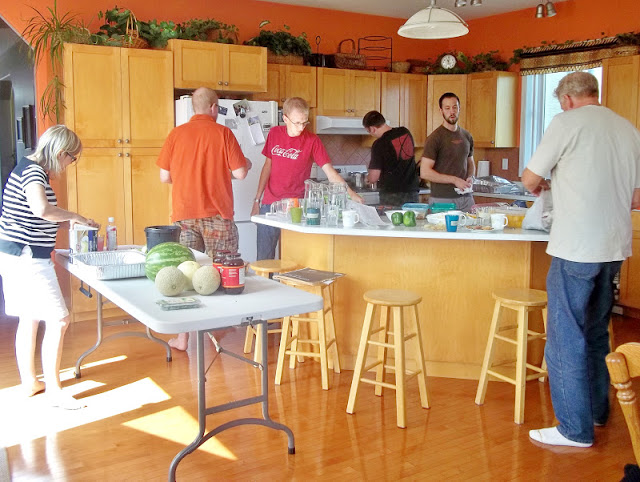 August 29, 2012
After five days of adventures, travelling, and fun Nate and I made it to Grande Prairie, Alberta.
Driving Time: 9 hours
It was an amazing weekend!  My camera was still spazing out so I didn’t get pictures of most of it and most of the pictures I did get are kinda horrible.  Oh well.
Megan’s parents were so hospitable.  There were twenty five people staying in their house, Nate and I at a neighbor’s house, and Peter and three groomsmen at another neighbor’s house.  At any given time there were usually around thirty or more people at the Larson’s house.  Such a party!  All the friends and family got along wonderfully and I made so many new friends!
One morning, a big group of us prepared the rehearsal brunch.  There was so much going on in the kitchen but, thankfully, many hands truly did make light work. In the end, most of the work was done by Nate, my mom, my dad, my Uncle Dave, and me but it was definitely the best cooking party ever!  (Leah took most of these pictures.  Somehow she got my camera to work longer than I could.)
That evening was Megan’s Staggette Party (or Bachelorette Party as we American’s like to call it)
The crazy girl had no qualms against going in public in this insane outfit.  No wonder I get along with her so well.  I’d be waving at cars too. All but two of the girls in this picture are bridesmaids.  Yeah, Megan had NINE!  Sara Marie (the other non-bridesmaid) and I had so much fun getting to know each other while the other girls were off getting their hair done, pictures taken, etc. See, I told you there were nine!  Thankfully, Peter has five brothers so he was set for groomsmen.  (Plus my hubby and three friends, of course) Oh, and did I mention they had a ringBEAR, not a ring bearer?  Yeah, they’re wonderful! It was so great to get to hang out with Megan and the bridesmaids and flower girls the morning of the wedding.  Megan even took time to practice a dance with the three flower girls that they preformed at the reception. All weekend I was in charge of the flower girls.  This job included making sure they were where they needed to be, were dressed correctly, didn’t pester Megan too much, etc.  Yes, I did fail at that job a time or two.  Dinah, Leah, and Katie (Megan’s younger sister – adopted from Niger) were so fun!  They got along so well with one another and my sisters are so bummed Katie doesn’t live near them. And then, of course, Dinah yells out “funny pose.”  Yep, Katie really didn’t know what to do with the Gardner girls. I’ll admit, I began crying when Megan walked down the aisle and then a few other times during the ceremony.  It makes me so happy that my oldest brother found the woman of his dreams.  God has blessed him so richly with a woman who loves him and desires to serve the Lord alongside him. Megan and Peter chose to sing a song with each other as a part of the ceremony.  It was by far my favorite part of the wedding.  Megan has her college degree in something music related and is an amazing vocalist!  I love that she and Peter will not only spend the rest of their lives serving Christ together, but they’ll be singing with each other as well.
I don’t have any pictures of it, but their reception was one of the most fun ever!  Everyone was dancing, laughing, and having such a good time.  I succeeded in getting all four of my younger brothers to dance with me and, once he was out on the dance floor, my 17 year old brother, Andrew, even asked one of the bridesmaids to dance.  The whole wedding and reception was such a good testament to who Megan and Peter are.  That’s definitely the way it should be.
Prev Post Next Post