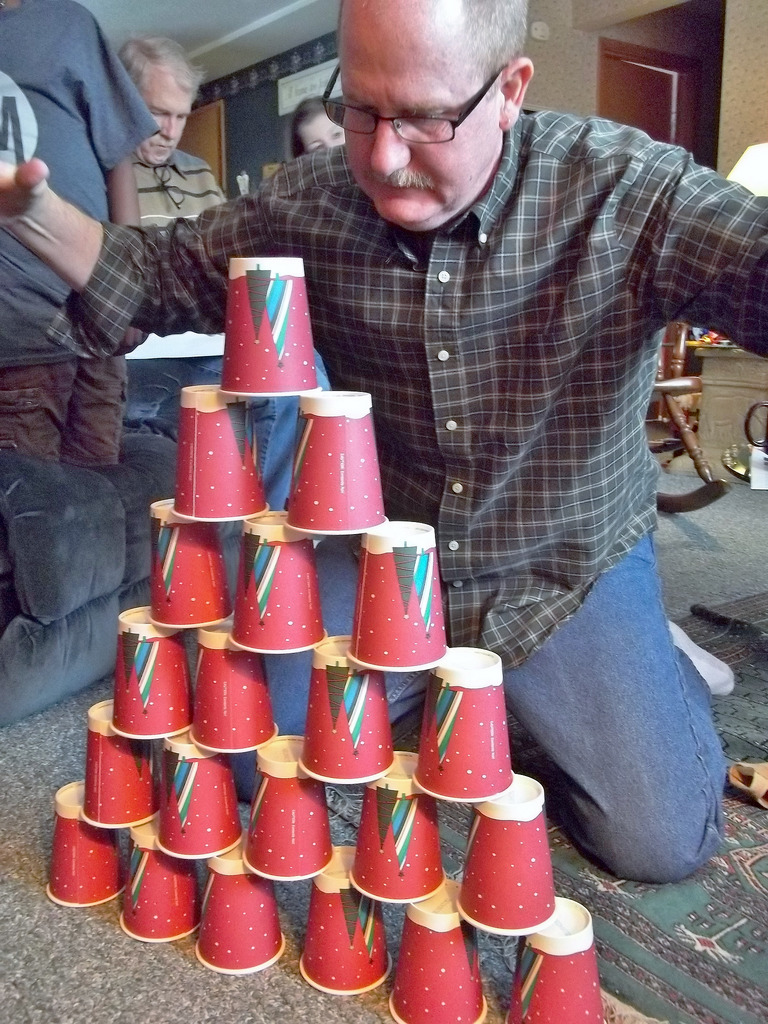 I’m Dreaming of a White Christmas

I know it’s almost the new year but I think that I still have time to share about how awesome my Christmas was.  Beware – there are a lot of pictures coming.  Scroll down at your own risk.

Nate and I spent Christmas with my family.  We headed to Spokane after work on Friday and got to my parent’s house, where the party had already started.  My mom had planned out a whole itinerary full of “British Christmas” events.  Games, food, and other activities were all British inspired.  It was a seriously fun idea!

We had a stack cupping race.  Some of the siblings did super well, which did not surprise me.  The surprise was my dad!  He stacked those cups so stinking fast!  It must have something to do with the fact that he’s a school teacher and has to deal with fourth graders all day. We also played some sort of inside competitors bowling game.  I’ve mentioned it before but I feel the need to reiterate, Gardners are COMPETITIVE!!!  There may have been times in this game where people ran across the “court” to hand knock over pins, illegal puppy guarding pins, and LOTS of yelling.﻿ Yes, I do always play games in a sweater dress. (Ok, in actuality, we had just gotten back from getting our annual family pictures taken and I just hadn’t changed yet.)  I was playing against my sister-in-law, Megan, and, after winning, yelled something along the lines of – “Gardners Rock.”  To which she responded – “Thank you.”  Oh yeah, she’s the Gardner now, not me. Aren’t Peter and Megan adorbs?  The correct answer is an emphatic “Yes!” Part of the British Christmas involved Dinah making Turkish Delight. She’s pretty stinking obsessed with the Chronicles of Narnia (and Lord of the Rings, but that’s a different story) and, ever since she heard the Edmond ate Turkish Delight, she’s loved eating it. Unfortunately, the end result was a pretty major flop. At least she tried. Next up was craft time.  All thirteen “kids” (ten siblings, two spouses, and a boyfriend) made foam sledding snowmen.  We totally enjoyed making a mess and trying to make each of our snowmen unique.  Being the perfectionist that I am, I made mine the way the directions said. Now, most of the members of my family have a flair for the dramatic. Each night, we had fun showing off that side of things. One night, we sang Christmas carols at the top of our lungs. Another night, we all dressed up and did a reader’s theater of “A Christmas Carol”… To ourselves. A different night we dressed up again and did a murder mystery. We were all given characters and had to figure preform different tasks and figure out who the murderer was. Such a blast! Ok, let’s comment on these costumes for a second. Nathanael looks more like a Chippendale performer than Tiny Tim. My mom looks surprisingly like a Bolivian sheep herder. Just smile and nod, I guess… My dad had an amazing idea to have a cheese and crackers night. We all brought exotic cheese, crackers, and meat. I think when we were done, there were about 25 types of cheese. We may have all ended up with stomach aches but it was totally worth it. Christmas eve morning, I snuck away to grab coffee with two of my dear friends from high school, Amy and Stacie.  I hadn’t seen one of them since my wedding, a year and a half ago.  It was so fun catching up and reminiscing about our high school days.  It’s so amazing to see where the three of us have gone since graduation.  We’ve all moved to different states, graduated college, and now are pursuing our dreams. Once I got home, the whole family bundled up and went downtown for a carriage ride.  While waiting, Dinah and Leah reenacted some of the modern art pieces.  Aren’t they clever… The carriage arrived and we had so much fun riding through the streets of Spokane, singing Christmas carols and yelling Merry Christmas to those out doing their last minute shopping.  Dinah informed me that the horses names were Snowflake and Whitey.  I’m not exactly sure how the names fit. Maybe it had something to do with the fact that one of the them had a white nose? Yes, we filled up an entire carriage.  It’s not hard to do with eight kids, two spouses, an uncle, his girlfriend, parents, and grandma.  Also, I think this picture personifies my brothers perfectly.  Andrew’s too cool for my picture, Philip hides, and Nathanael looks like a goofball.  I love them to pieces. Since it had snowed the night before, I made Nate take a cute snow picture with me.  Isn’t he handsome and good looking?  Back off ladies, he’s mine. After church on Christmas Eve, my family has a tradition of going out to Chinese food.  This started years and years ago, when we lived in Taiwan.  Although it’s sometimes hard to find authentic Chinese restaurants (especially in white bread Spokane), we’ve found a few places that suite our fancy.  This year, Santa even showed up at the restaurant!!!  Aaron wouldn’t get in the picture with us since he doesn’t have a wife.  What a party pooper. After dinner, eleven of us crammed into Peter and Megan’s one bedroom apartment to sleep.  My siblings and I have always shared a room on Christmas Eve but it’s gotten to where there are far too many of us, plus there are now in-laws.  We figured all of us staying in one apartment was close enough.  We stayed up late watching Home Alone 1 and 2.  Some of the little kids hadn’t seen it before and all of us were laughing up a storm.  It was tons of fun but, I’m not going to lie, Christmas morning came far too early.  We quickly cleaned up and hopped in the cars to head to the parent’s house.  Problem was, Nate and my car doors were frozen stuck!!!  After about fifteen minutes, Dinah climbing in through the trunk, and defrosting spray, we finally were on our way.  Santa had definitely come to my parent’s house! Remember, there were nineteen people for Christmas morning.  These are gifts for ten kids, two in-laws, one boyfriend, an uncle, his girlfriend, grandparents, and parents.  Yes, Christmas morning always lasts well into the afternoon at my parent’s house.
You may be wondering what all that yarn is.  Well, the Christmas after my brother, John, was adopted (eleven years ago), my parents decided it would help him not be overwhelmed if they scaled back for Christmas.  We each got one present and then some family presents (games, movies, foosball table, air hockey table).  They didn’t want Christmas morning to be over in a snap so they attached our presents to the yarn and wound it around the house, outside, through the trees, etc.  It was such a blast that we’ve insisted they do it every year.  A few years ago they decided it would only be for highschoolers and under but it sounds like next year the age cutoff is going to be younger than highschool.  That’s probably for the best.  The babies are the ones who enjoy it the most anyways.
﻿ Unfortunately, Nate and I both had to work the day after Christmas so, after Christmas dinner (an amazing traditional English dinner) we packed up the car and drove through the snow, home to Portland.  It was so wonderful to celebrate the birth of Christ with my family.  We really missed you, Rebekah (and family) and John.  Hopefully we’ll be able to see you soon!