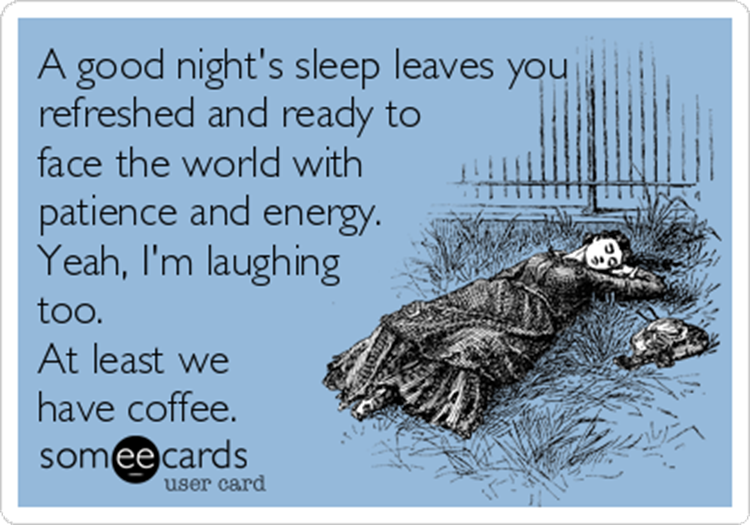 Source I am not a morning person.  I think anyone who’s had to deal with me in the morning knows this.  I’ll admit, at first I was decent at hiding this fact from Nate.  Every morning I faked a smile, faked energy, and faked that I wanted to talk.  Once the “honeymoon stage” wore off things got a little rough because Nate thought I was mad at him every single morning!  Of course, he’s since learned that all he needs to do is stay silent, give me a hug, and ignore me until I have my coffee.  Really, he should have just asked around about my morning habits.  No one else was surprised that I hate mornings. What most people don’t know, though, is that I’m also REALLY dumb in my sleep. The first time I noticed it was Freshman year of college.  In the middle of the night the fire alarm starting screeching.  In my stupor, I convinced myself that it was just my roommate’s alarm clock going off.  I was getting more and more mad at her that she wasn’t turning it off until she finally drug me out of bed and out of the building…  (Thankfully it was only a coffee pot that had exploded in the lounge…  The building wasn’t on fire) The next time I noticed my stupidity was a few months into marriage.  In the middle of the night, Nate got up to use the restroom.  All of a sudden I hear a loud crash and hear the thud of Nate’s body hitting the ground.  In my insanity I though to myself “I think Nate just died!” and then quickly decided I would deal with it in the morning.  (In reality, he tripped over something, knocked some pictures off the wall, and hit the ground.  He was fine) A few months later allergy season started up.  I unfortunately am married to a man with allergies.  (Read: Who snores during allergy season)  After many, many nights of dealing with his snoring (did I mention I’m also a SUPER light sleeper?) I woke up and didn’t hear anything!  Once again I thought Nate must have died.  (Why else would the snoring have stopped?)  Once again I decided I would deal with it in the morning. What’s the moral of these stories???  Well, when we have kids, Nate’s in charge of the night shift.  I don’t trust myself.

There's nothing wrong with a baby elf eating Baby