The Year of the Baby 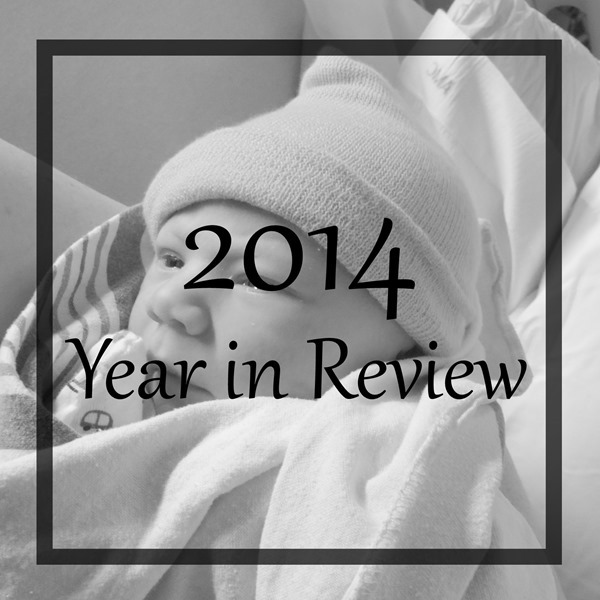 I honestly can’t believe today is the last day of 2014.  It doesn’t seem like too long ago that Nate and I were ringing in the New Year, excitedly awaiting all that 2014 had in store.  Let me tell you, this year exceeded all my expectations.  I have to say that it was one of the best years yet!
January

The first month of the year started out slow.  I took a class at Nate’s school on Women in Leadership and learned and grew so much!  Nate and I began leading a small group at our church and developed some wonderful relationships in that group.  We recovered from the craziness of the holidays and I struggled with the fact that I hadn’t gotten pregnant for the second month in a row while remembering that it can take a lot more than two months for most women to get pregnant.
Some of my favorite posts:

How am I Going to be a Pastor’s Wife?
I Don’t Recommend Getting Married Young
Honey Rosemary Simple Syrup
“Healthy” Blackberry Cobbler
I Won’t be Making Nate Breakfast Anytime Soon
February

This month brought with it Nate’s 25th birthday.  We had a quiet celebration with a few friends at one of our favorite pubs.  I also celebrated my 2nd blogiversary this month.  I had the opportunity to take another class at Nate’s school – Developing Bible Study Curriculum – and loved the chance to grow and learn.  Nate and I booked our trip to NYC and DC and, although I still wasn’t pregnant, I prayed that I wouldn’t have to deal with morning sickness on this trip.  We didn’t know it yet but I got pregnant at the end of this month.
Some of my favorite posts:

Helpmeet or CoWarrior?
My Boyfriend was a Big, Fat Liar
The Loneliness in Trying
March

At the beginning of this month we found out I was pregnant!  It was such a special time for us as we celebrated the little life I was growing.  I had a bleeding scare at the end of this month but, praise the Lord, it didn’t harm my pregnancy.  Although I was so unbelievably exhausted, I was incredibly thankful that I didn’t get sick during the first trimester.  Nate’s parents moved back to Seattle from Arizona and we were able to tell them in person that their first grandchild was on the way.
Some of my favorite posts:

Can a Protestant Celebrate Lent?
Nate’s Fabulous Biscuits and Gravy
Nate’s Not My Spiritual Leader
Work My Closet: Why I Like Fashion Blogging
25 Spring Date Ideas
Where am I From?
April

On April 1st I told my coworkers and boss that I was pregnant.  Although I didn’t mean to tell them on April Fool’s Day it ended up being fun to see them trying to figure out if I was telling the truth or not.  Nate and I took our two week trip to New York City and Washington DC.  It was a wonderful babymoon – a time to reconnect, visit somewhere new, and enjoy our last trip before our little one came along.
Some of my favorite posts:

Unfortunately, I didn’t write any of my own content this month due to pregnancy exhaustion and being on my trip
May

Our trip to NYC and DC finished up in May and we came back to Portland and got back into the groove of normal life.  After getting back, Nate and I shared with the world that we were expecting our coming bundle of joy.
Some of my favorite posts:

My grandpa passed away at the end of May and we celebrated his life with a Memorial service in early June.  Nate had the honor of giving the message at the service and it was so special to hear him sharing about the hope in life after death that comes with knowing Christ.
Some of my favorite posts:

On our anniversary, July 2nd, Nate and I got to find out the gender of our little bundle of joy.  We were so excited we would be welcoming our little boy, Caleb Russell, in November.  We went to Spokane to celebrate the 4th of July with my family and got to tell many of them in person who the little one was.
Some of my favorite posts:

Why so Silent?
Baby K is a…
The Problem with Blessings
Let’s Start a Revolution
Bumpity Bump Bump
August

August was pretty slow and easy.  We spent a lot of time just relaxing and spending time with friends.  We enjoyed one of the last months just as the two of us.
Some of my favorite posts:

In early September my brother and sister in law came down from Seattle and we spent a weekend enjoying time together (and with our uncle) at the beach.  My younger sister found out that she was pregnant and we were excited that Caleb would have a little cousin friend.
Some of my favorite posts:

My Child is Named After a Dog
If I Could Tell You Just One Thing
1-2-3-Pppuuuusssshhhh!!!
Dear Sister Who Struggles
I Guess I Love Lace
October

As my due date was gradually approaching, I was blessed by my friends and family with two lovely showers.  It was such a special time to celebrate the upcoming birth of my son.  We also found out that my sister in law was pregnant!  It’s going to be so fun to have three babies in the family come June!
Some of my favorite posts:

Lessons from a Long Ago Vacation
A Very Special Shower
Your Husband Can Be Your Best Friend
I Really Don’t Like “Christian” Music
He Will Move Mountains
We’re a Month Away
Why I Celebrate Halloween
Can I Be Done Now?
A Feminist Who’s Sick of Feminism
November

This month was the best of the year!  On the 1st I celebrated my 26th birthday.  Nate surprised me by taking me overnight to a hotel and booking us a couple’s massage.  It was such a great way to celebrate for this eight and a half month pregnant woman.  On November 17th, baby Caleb entered the world.  We were thrilled to finally be parents!
Some of my favorite posts:

Really, YOU’RE telling ME?
But I’m Flat Broke
We’ll Look Back and Laugh at This
I Couldn’t Do it Without You
Tips on Dressing a VERY Pregnant Belly
Nursery Reveal
Caleb’s Birth Story
December

After three and a half years, Nate finally finished his graduate degree.  He now has his Master’s of Arts in Biblical and Theological Studies.  I’m so proud of him!  We spent the month getting used to being parents and enjoying our little boy.  Since Caleb’s good in the car, we were able to go up to Spokane and celebrate Christmas with my family.  11 out of the 12 kids made it to my parent’s house and it was wonderful to reconnect with all my brothers and sisters and to introduce them to my precious little man.
Some of my favorite posts:

I Can’t Believe You’re Finally Done
Mary, Did You Know?
Baby, Bouncing, and Bundling Up
It’s been an amazing year and I can’t wait for 2015!  Thank you all for following along and reading Simple Moments Stick this year.  I’m excited to see what next year has in store!
Most Viewed Posts of 2014

There's nothing wrong with a baby elf eating Baby