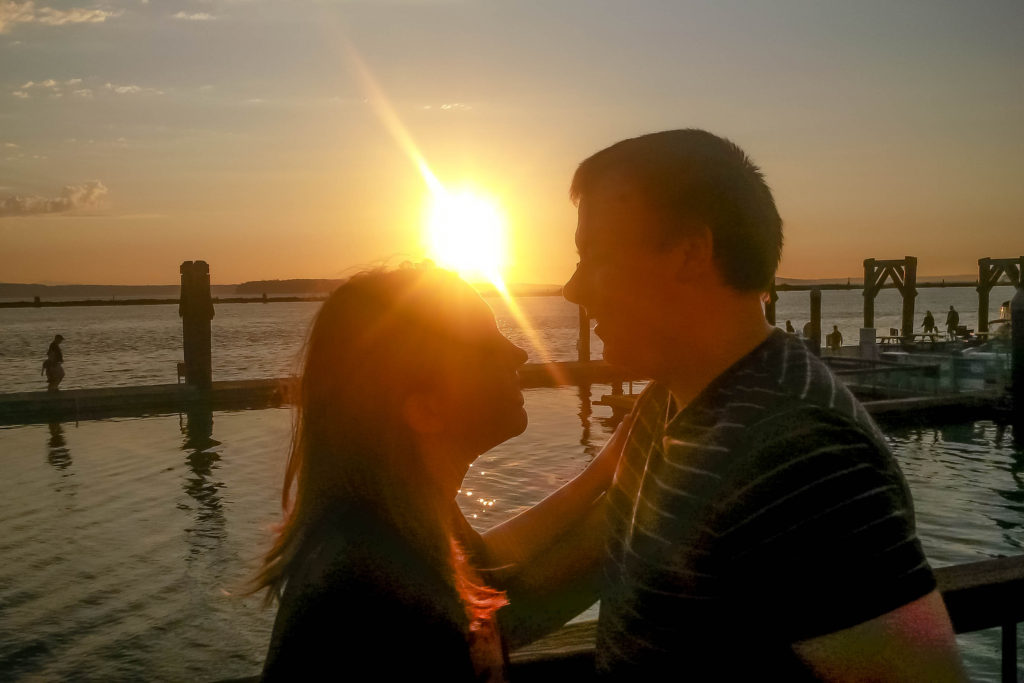 How to Guard Your Marriage We’ve all heard the statistic – around 50% of marriages end in divorce.  Whether the couple is Christian, non-Christian, or mixed belief it doesn’t appear as though it matters – half of the marriage are going to end in divorce.  Half of the couples who pledge “Till death do us part” will be parted long before death occurs. Now, I’m not here to debate whether divorce is right or wrong.  I’m not here to quote verses at you or specify when it’s Biblically allowable to divorce and when it’s not.  If you are divorced I’m certainly not here to judge you or your reasoning for getting the divorce.  I’m not even to talk about divorce at all – I’m here to talk about marriage. Marriage matters and there are many things we can be doing to keep our marriages strong.  We need to be keeping our marriages strong long before any huge issue arrives, long before the “d” word is ever uttered, and long before an impenetrable wall is in place between our spouse and us.  We all need boundaries to protect marriage!

How to Guard Your Marriage

Keep Your Eyes and Thoughts from Questionable Material

During my last semester of college I took a Marriage and Family course as my final Psychology elective.  In that class the professor stated that by the age of 12 every male has been exposed to pornography and that the age was going to be even lower for the next generation.  I couldn’t believe that statistic until I looked around the room and not a single one of the 50+ guys in the class were in disagreement with that statement.  Now, that’s not to say that every one of those guys struggled with a pornography addiction.  That’s just saying that by the age of 12 every single one of them had been exposed to some form of pornography – whether they had sought it out or stumbled upon it.  As a mom of a little boy that is extremely terrifying to me and as a wife it gives me a better understanding of where my husband is coming from.  Even the most pious Christian man has been exposed to pornography and, even if he has handled it well and kept away from its lures, it has left an impact in his brain.  Unfortunately, this early introduction to pornography sets so many men up for a lifelong struggle of keeping their eyes and minds pure. Although most of the statistics on pornography addiction is in reference to men, the number of women who view pornography is on the rise!  There are porn producers now who aim their material at women in a way that wasn’t in existence before.  Women also are more likely to read erotica and watch movies with sex scenes – both which cause an unhealthy view of sexuality and relationships. As married couples (and singles too, for that matter) we need to be keeping our eyes and thoughts away from this trash.  It’s absolutely unhealthy and causes horrible unrealistic expectations on sexual relationships.  Since sexual problems are one of the top reasons people give for why they are divorcing it is important that we do not allow anything to come between our spouses and us in bed.

Set Up Boundaries with the Opposite Sex

Too many marriages disintegrate due to either a physical or emotional affair.  It’s so sad to see a person blindsided by the infidelity of their spouse.  I’m sure the majority of people who cheat on their spouses were not looking for an affair.  They simply had not set up boundaries to keep themselves from connecting with an individual who was not their spouse. This looks different in every marriage.  There are so many boundaries that I’ve seen, heard of, or implemented in my own life.  Many of these may not be needed in your relationship and some may seem very intense and you and your spouse need to discuss which ones are necessary for protecting your relationship.  These boundaries include but are not limited to…

Yes, some of these are more extreme than others but you and your spouse should discuss where your boundaries are as a couple and you should hold yourselves and one another to following through with those boundaries.

Give one Another Grace

One of the best books Nate and I read before we were married was the book “When Sinners Say “I Do”” by Dave Harvey.  The book was such a wonderful reminder that we all are sinners, saved by the grace of God, and we need to be extending grace to one another because of the grace God has extended to us. Although sometimes there are aspects of a relationship that are absolutely beyond reconciliation – especially if one spouse does not desire to work toward reconciliation – the majority of marital problems can be worked through when both spouses put down their own desires and offer grace to each other.  Do not be quick to judge your spouse’s actions and think the worst of him.  Allow him to mess up and then work through it without holding it against him forever.  None of us do marriage perfectly and we need to give grace for mess ups that will inevitably happen.

Don’t Rely on Your Spouse for Fulfillment

I’m going to repeat that statement since it is so unbelievably important – Don’t Rely on Your Spouse for Fulfillment!  Seek the Lord and find your fulfillment in Him and your marriage will benefit from it.  Your spouse can not satisfy your deepest desires, no matter how hard he tries.  Only the Lord can do that.

Your Turn:
What guidelines do you have in place that are protecting your relationship?
What are your favorite marriage books?