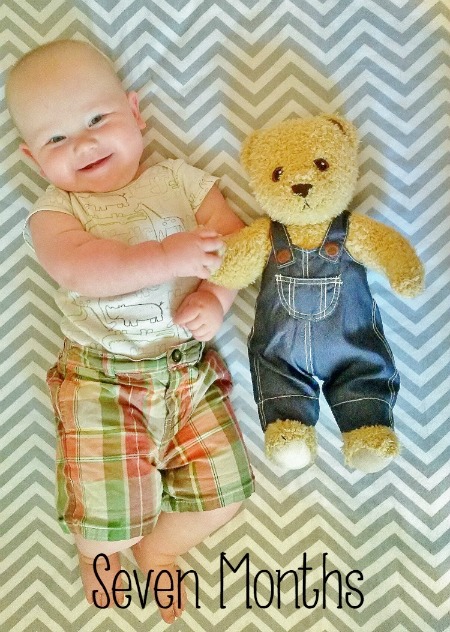 My Little Boy is Never Getting Sick Again! My monkey is getting SO big.  It’s hard to believe that only seven months ago he was a little 8 pounder who could do nothing for himself.  Now he’s a little person who’s funny and adorable!

The little stinker is just getting bigger and longer every day.  In the past week he’s gone through a growth spurt and outgrown all the pants he was previously wearing!  I love how squishable he is!

Sleep:  Let’s not talk about sleep.  Seriously.  Last month things were getting better and we were talking about sleep training and everything looked so positive.  When Caleb got sick all that changed!  Thankfully we had just gotten his done with being swaddled before he got sick.  He had a huge sleep regression and we’re just not getting back to ok sleep.  We cut out his dream feed to prepare for sleep training but he still wakes up, like clockwork, twice a night at 1 and 4:30.  It’s dumb.  He also still needs to be bounced or nursed to sleep for every nap and bedtime (and twice during the night).  We have a plan, though!  After getting back from visiting family for the 4th of July we’re going to start with the Sleep Lady Shuffle and get our little boy to start sleeping better!

Likes:  Rolling around on the ground, Kissing his mom and dad, Biting EVERYTHING, Playing peek-a-boo, Trying new foods, Throwing food on the ground, Being attacked with kisses by mommy and daddy, Playing with his toys, Mama’s boobs, Daddy, Singing, Bath time, Medicine

Dislikes: Getting sick, Being tired, Spending too much time eating without being able to get food to his own mouth, Mama and daddy trying to help him eat, Purees

Milestones:  About two weeks out of this past month were terrible.  Caleb and sicknesses do not mesh well.  (I’m sure any baby and sicknesses don’t mesh well)  He was waking up about every two hours during the night, he started screeching a horrible screech, and he just acted all around miserable.  It was the roughest part of parenting so far.  The good news is, though, that we discovered that Caleb loves for us to squirt medicine into his mouth.  Yeah, we have a weirdo on our hands.  We took a break from baby lead weaning while Caleb was sick but we’re back at it and still loving it.  We haven’t found anything he won’t eat (as long as it’s not pureed) and he loves feeding himself!  His favorites so far seem to be apple slices, chunks of meat, pieces of bread, and broccoli.  He absolutely refuses to eat purees or anything we try to serve him.  If I try to put it in his mouth he keeps it closed but if I hand that same thing to him he’ll happily put it in his own mouth and chow down.  I don’t know who he got his stubbornness and strong will from.  *cough*me*cough*  Caleb loves putting everything into his mouth.  We have to watch him constantly to make sure he’s not chewing on cords or finding things he shouldn’t be eating and sticking them in his mouth.  He may or may not have chewed the price tag off a new pair of shorts of mine.  I found the remnants of it in his diaper the next day.  We’re so excited that it’s looking like Caleb is musical!!!!  Whenever Nate pulls out his guitar now Caleb will start “singing” along.  It’s absolutely adorable and I can’t wait to see what instrument he wants to play. (I’m hoping it’s not the drums.  Nate’s hoping it is.)  Caleb is so skilled at rolling around the room now.  He’s been rolling for a while but he can intentionally get to where he wants to go now.  He’s *this* close to scooting/crawling and I don’t know how I feel about that.  It’s so fun watching Caleb learn.  He recognizes the words “gentle,” “no,” “daddy,” and “kisses” and probably more that we haven’t realized.  It’s amazing that he already understands some of what we’re saying!  Caleb has an adorable peek-a-boo game that he plays with Nate.  He forces Nate’s head down when he wants to play and laughs and laughs when he gets his way and Nate joins him in his game.  Caleb adores his daddy! My little Bubbu, I love you so incredibly.  It’s amazing how much my heart broke this month when you got sick.  I just wanted to take your pain from you and I felt helpless when I couldn’t.  I’m so thankful that you’re better now.  You are an amazingly funny little guy.  You have such an adorable sense of humor and light up the room whenever you laugh.  You have another side to you that we’re not as fond of.  You can be pretty hard to deal with sometimes, especially when you’re tired.  Even so, we love you more than you could ever know.  We love watching you grow and learn and know that God has amazing things in store for you.