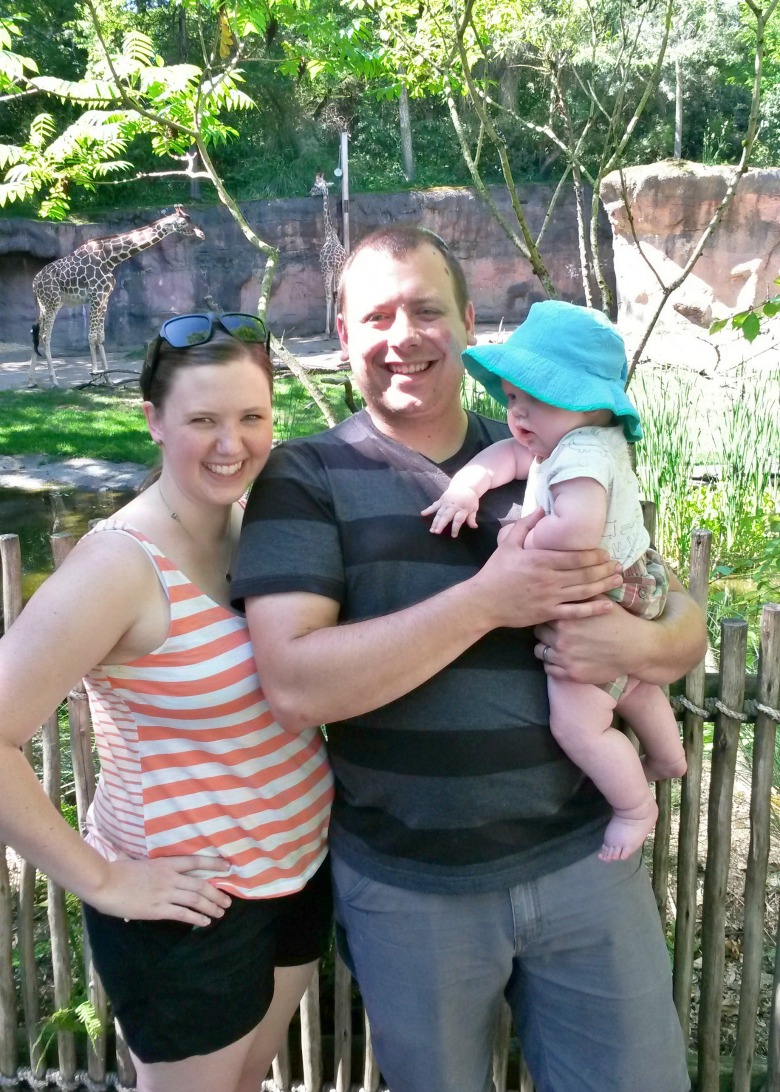 The Zoo Brings Us Hope Toward the end of my pregnancy I remember telling my midwife that I was certain I was pregnant with a feisty, opinionated, stubborn little man.  There was just something about the way he kicked me – the way he poked me back when I tried to get him to move his foot – that made me feel like I knew a piece of his personality.  My midwife chortled a little bit and told me that most of the time babies follow take the lead from their parents and since Nate and I are pretty laid back our baby would be too…  Little she knew…
I’m raising a fairly difficult baby.  This kid has two moods – joyful and screaming.  He can’t stand being tired.  From the first yawn on my little man screams.  We have to either bounce him on the yoga ball or nurse him until he falls asleep.  It can take two or more hours to put him down and, if we don’t bounce, the little guy screams.  Caleb goes from happy to screaming in the blink of an eye and there’s often no reason for it at all.
My little man is already so opinionated.  He has refused to take a bottle and, now that we’re starting solids, he refuses to let us feed him.  We’re thankful that we decided to do baby led weaning because he will NOT let us feed him purees.  He loves eating when he’s able to feed himself but our little guy is super self reliant.
Caleb already throws little temper tantrums.  When we’re not doing what he wants, if we don’t give him something he wants, or if he’s feeling ignored he throws a tantrum.  He kicks and screams and then, if we either are able to do what he wants or distract him with something else, he’s perfectly happy again.  Remember Mother’s Day?  Yeah, that’s a perfect example of Caleb’s opinions.
All that being said, within the past few weeks we’re seeing hope and a light at the end of the tunnel.
We’re getting to know a compassionate, soft hearted little boy.  We’re seeing a baby who knows how to respond correctly when we say “gentle” or “no.”  It’s precious to see him grabbing my necklace and, when I say “gentle,” letting his grip go just a little bit.  It was awesome to see the way he softly patted both my parent’s cat and my sister’s three week old son when we were visiting.  It’s adorable to see him getting into our DVD collection and hearing Nate say calmly “No, Caleb, we don’t get into that,” and watching him give Nate a big smile and move onto a new activity.
We’re getting to know an affectionate little boy.  Without prompting our baby will smother us with kisses multiple times a day.  Sure, it’s gross to have baby slobber all over our faces but it’s totally worth it.
We’re getting to know a funny little man.  We can already tell that Caleb has such a great sense of humor.  He giggles, chuckles, and laughs so often and loves it when we respond to things he does with laughter.  His smile lights up the room and Nate and I will do just about anything to get him to smile.
Yesterday was the most freeing day of all so far.
Know this – Caleb hates being out and about.  Caleb hates sunshine.  Caleb hates nature.
Yesterday we decided we didn’t care.  We wanted to go on a family outing and decided the zoo was where it was at.  We figured we could leave when Caleb started throwing a fit but we’d stay as long as we were able.
You guys!!!!!  Caleb did SO well!  When we had seen about 3/4 of the zoo Caleb started hating his stroller.  He wanted to be carried.  Screaming ensued.  For the last 1/4 of the zoo either Nate or I was holding Caleb and he remained happy and WE WERE ABLE TO SEE THE WHOLE THING!!!!!!!!!  It was a summer miracle!  Our little boy is growing up and we can finally start getting out of the house and going on adventures again!  (Granted, he did have a complete melt down as soon as we got back to the car…  Baby steps, people)
It’s fun getting to know my little man and seeing his personality develop more and more.  It’s fun that I knew an aspect of his personality from before he was born but I’m so glad that’s not all there is to his little personality.
As difficult and frustrating as he can be, he’s so amazing as well and I wouldn’t trade him for the world.  (Although there are times I think I’d be willing to give him back between the hours of 7pm and 7am.  Is that an option???)  😉
Prev Post Next Post