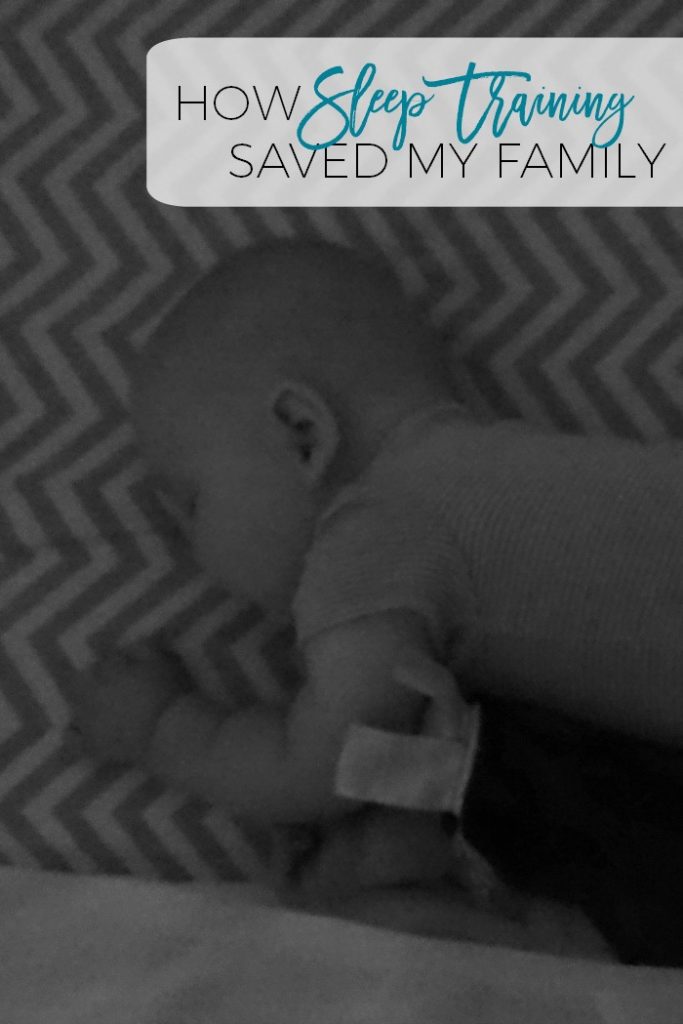 You guys!!!!!  I have bigger news than the fact that we’re moving!!!!  Seriously!!!!  I put off sharing this on the blog because I didn’t want to jinx it but it’s been long enough that I think it’s safe for me to share it…

I want to share our journey with you all to give you mamas who have horrible sleepers hope that someday your child will be able to sleep too!  (If you’re anti sleep-training you probably should stop reading this now…)


Caleb has always had a hard time falling asleep.  As a newborn he would begin screaming around eight o’clock at night and not stop until midnight.  The only thing that would keep him happy was either Nate or me bouncing on our yoga ball while holding him.  It was hours and hours of bouncing on the yoga ball, night after night, keeping him from screaming.

Once three and a half months hit Caleb decided napping wasn’t something he needed anymore.  He was taking twenty minute naps (that involved half an hour or more of bouncing to get him to fall asleep) and taking those naps five or six times a day.  If I held him tightly, not moving a muscle I could sometimes keep him asleep for forty minutes.  I was spending all day every day nursing him, bouncing him, or holding him while he was sleeping.  Let’s just say that I watched A LOT of Netflix.  Let’s also just say that I cried A LOT during this period.  It was the most exhausting season of life I’ve ever had.  (Well, my first trimester of pregnancy might have been more exhausting, just in a different way)

Gradually I was able to keep Caleb sleeping during nap times if he was sleeping in his swing.  I’d bounce him on the yoga ball for a long time (usually half an hour or more) and, finally, when he was asleep enough, I’d slowly and gently place him in his swing, praying that he would stay asleep.  Probably about half the time his eyes would jump open and he’d start screaming and I’d have to start the whole process over again, holding him this time instead of putting him in the swing.

My house was a mess.  I was a mess.  Nate and I had no time together since one of us was constantly with the baby, helping him fall asleep or holding him to keep him asleep or remaining as quiet as possible if we got him into his swing to keep him from waking up.

Slowly but surely things got a little better.  Caleb was able to stay asleep without being held or being in the swing.  Bouncing still had to happen… for hours a day…  but, when he was asleep in his crib, we had a little bit of time to do things.  He only stayed asleep for forty minutes at a time (like clockwork) so we rushed to get things done in that forty minute window.

Caleb started waking up between 5:30 and 6am.  I was exhausted so Nate and I figured out a system that worked for us.  After Caleb’s night feeding (thankfully he’s almost always only needed one or two night feedings) Nate would go sleep on the couch.  If Caleb woke up again before he was awake and ready to play Nate would let me know and I would feed him and get him back to sleep.  If Caleb was awake (like I said, typically between 5:30 and 6am) Nate would play with him and keep him happy until leaving for work (around seven) at which point he would bring him into the bedroom, wake me up, and I would feed him.  It (kind of) worked for us.

After visiting my family for the fourth of July (and having to bounce him for every nap/bedtime – cutting into the time spent with my family) we knew it was time to make some changes.  We decided to see if Caleb could put himself to sleep for bedtime.  The first night was a little rough but went SO much better than we were expecting.  I fed Caleb, laid him down drowsy, rubbed his head (which he loves), gave him kisses, turned out the light, and left the room.  The little guy was so confused and angry!  Of course he started screaming.  After not too long I went back in, rubbed his head again (without picking him up), got him calmed down, and then left again.  This time he started crying but not screaming.  That cycle happened a few times until, after forty minutes, he had put himself to sleep!

That first night Caleb woke up at two, wanting to be fed (which I did), and then slept in until…  SEVEN THIRTY!!!!!!!!!!  We thought it had to be a fluke but it wasn’t!  Gradually it’s gotten easier and easier for him to put himself to sleep and it’s rare that he’s so overtired that he cries enough that I have to go in and calm him down.  It’s usually ten minutes or less and he’s asleep.  He’s now waking up sometime between 12 and 1am to eat and then sleeping until seven thirty.  Yes, he’s sleeping 6 1/2 to 7 hours straight!!!!!!  Nate now gets to stay in bed with me the whole night and it’s such a welcome change.

After a few weeks I decided it was time to start working on Caleb putting himself down for naps.  He was still being bounced to sleep for naptime (remember, it could take up to half an hour for him to fall asleep) and then would only sleep forty minutes.

The first day of nap training I was prepared to spend the whole day working on sleep.  I figured he’d fuss for a LONG time with me having to go in to comfort him for each and every nap (he was taking four or five a day!).  The first naptime came and I laid him down.  He hardly fussed and was asleep within ten minutes.  He then proceeded to sleep for TWO HOURS!!!!!!  (You better believe I went in his room during that time to make sure he was still breathing)  The next nap came and he wasn’t as thrilled with me leaving him to put himself to sleep.  It took forty minutes for him to stop fussing but he wasn’t even really crying – more like whining.  Once again, once he fell asleep, he slept two hours!!!!

Caleb is now putting himself to sleep for every nap and bedtime…  We’ve even deflated the yoga ball that we used to spend hours a day on, bouncing him to sleep!  He’s taking 2-3 naps a day.  The two for sure naps he takes are between one and a half and two and a half hours and he’ll sometimes take a half hour nap in the early evening.  It’s amazing to be able to have a somewhat predictable schedule with my little guy!!!

Ladies, if your baby is a bad sleeper just know that there’s hope.  Someday your little one will sleep.  It may not come in the same way or at the same age as it did with Caleb but, when you think about it, unless there are medical problems, everyone eventually learns how to sleep.

Mama, if you’re still in the trenches, I’m sending you a virtual hug and a prayer for miraculous sleep for your little one!  It is SO unbelievably hard!  Feel free to comment or email me with your venting and I will listen.  I promise I won’t offer advice (unless you ask) because I know you’ve probably tried everything.  I’ll be a listening ear, a (virtual) shoulder to cry on, and a celebrator of the little accomplishments.


Your Turn:
What have you done that saved your sanity as a mom?
Did your child ever need something like vigorous bouncing to fall asleep?