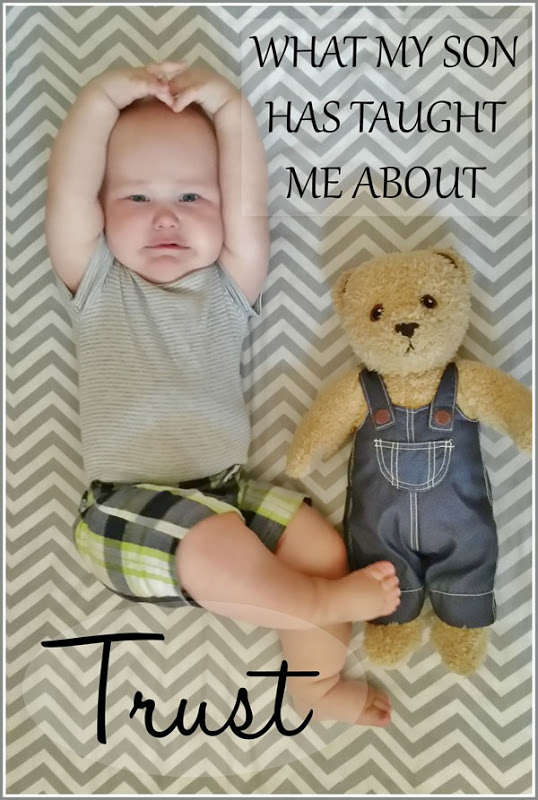 What My Son Has Taught Me About Trust Caleb has a thing for fans.  He loves watching them, he loves feeling the air blow on his face, and, recently, he loves sticking his fingers in them.  Yesterday, while he was crawling around, Caleb (Mr. One Tracked Mind) decided he wanted to stick his fingers in the box fan in our living room.  It’s all he wanted to do and no distraction would dissuade him from it.  I spent probably a good hour moving the fan away from him, moving him away from the fan, and trying to play games with Caleb to keep him away.  He wasn’t having it.  He was getting so mad at me for not letting him do the one thing he really wanted to do.  Finally, after I thought I moved the fan high enough away from him, I went into the kitchen to fill up my water bottle.  As I was gone I hear Caleb start crying.  I went into the living room and, sure enough, he had pulled himself up so his finger could reach the fan and he had stuck his finger inside the grate.  This fan stops if something gets in its way so Caleb wasn’t truly hurt but he was startled enough that he needed to be comforted for quite a while.  I wish he could have understood that me keeping him from the fan was for his own good. As I pondered how to use this to teach Caleb a lesson about obedience and trust I realized that I’m so much like Caleb.  When it comes to my relationship with God, I am often an untrusting baby.  God knows what is best for me and, all too often, I refuse to trust Him.  I’m like Caleb, crawling toward the thing that’s going to cause me harm and refusing to listen when God gently guides me away.  In God’s eyes, I’m often a stubborn nine month old, deliberately heading toward something that He knows isn’t what’s best for me. I don’t want to be an untrusting child of God.  I want to be mature in my trust in Him.  This was a good kick-in-the-pants reminder for me that His way is best and that I need to submit to His leading.  Sure, at times it may not appear to my human eyes that His way is best – just like Caleb doesn’t think it’s best when I take him away from the fan and try to have him play with his bear instead – but it always is!  His ways have an eternal mindset and I desire to be a woman who follows those ways. What amazing lessons I learn from my baby boy.