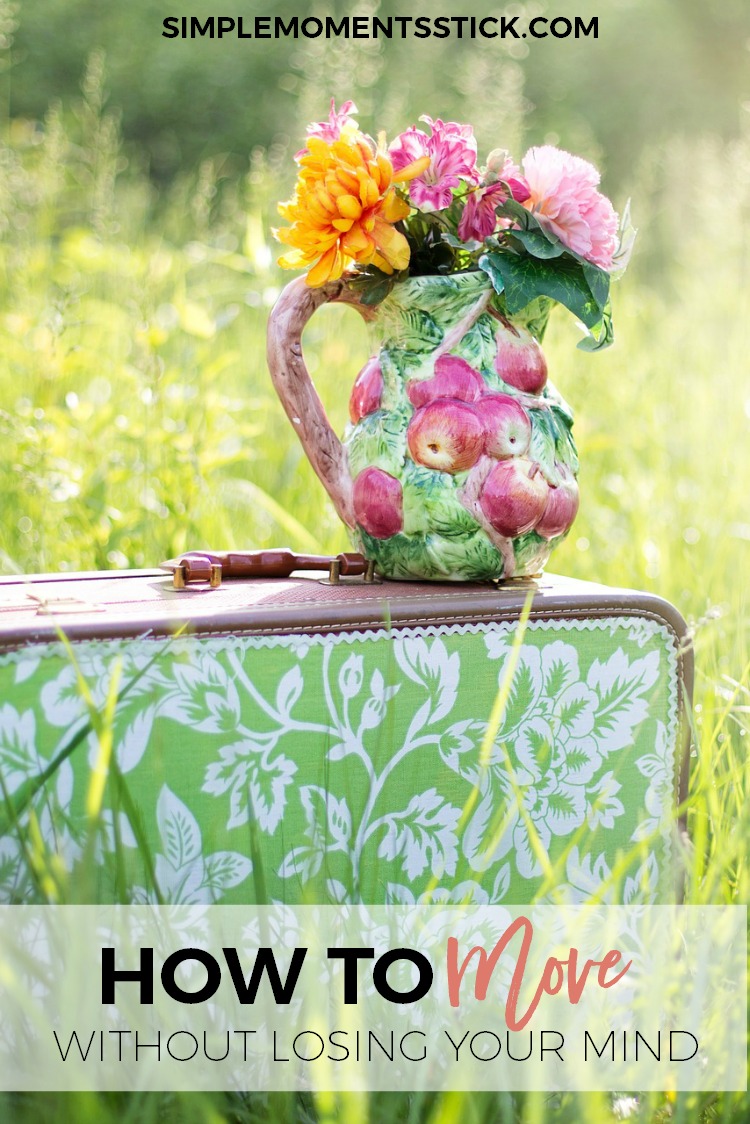 How to Move Without Losing Your Mind Moving is the worst!  I’m sure you can relate with that sentiment!  Between organizing, packing, purging, traveling, and wrangling a kid I feel like I never want to move again!  All that being said, WE’RE HERE!  The biggest surprise was that we got to move into our rental house on Monday, the day we moved instead of having to camp out with a few of the people from the church Nate will be pastoring at!  We had been told it wouldn’t be ready for us by then but, the Friday before, found out that they sped up the repair work and had it ready!  (Well, mostly ready…  We’ve had to clean up the yard, mop the floors, clean the fridge…  BUT we’re HERE!)

Nate’s already loving his job, I’m getting our house all settled and finding places to meet people, and Caleb… well… Caleb’s adjusting…  I hadn’t moved since leaving college and getting married and, because of that, have learned a lot about moving in the past month or so.  Of course, since I’m nice, I’ll share what I learned with YOU!

Nate was offered the job as Worship Pastor over a month before moving.  He had a few thing going on at work that he wanted to finish up before moving so he gave his four weeks notice instead of his two weeks notice and then he also took a week off work in order to smooth the transition.  I could have easily waited weeks and weeks before beginning to pack but, instead, I started packing about a week after Nate accepted the job offer.  Since I was able to pack gradually I never had to rush it.  I was able to think about what I didn’t need in the upcoming month and pack it instead of simply rushing the packing.  I know not everyone had four weeks to pack but my recommendation to you is to start as soon as you’re able and pack gradually and intentionally.

We all have nooks and crannies in our houses that hold items we’ve forgotten about or have not used in a long, long time.  As you’re packing, be realistic about those thing.  If you forgot about the item or haven’t used the item in forever GET RID OF IT!  If you want to make money off of the item think about holding a garage sale or selling it on Craigslist.  If you don’t need to make money then take it to a thrift store, offer it to a friend, or maybe even join a Buy Nothing group on Facebook.  Whatever you do, DON’T pack it and DON’T take it with you!

When I sealed each box I packed I labeled the box with the name of the room the majority of the items in it went in.  As we unpacked our moving truck, we were able to take the box into that room – instant organization.  Since we labeled our boxes I was able to get Caleb’s room, the kitchen, and Nate’s and my room completely unpacked in the first two days of living here.  I didn’t have to dig around and find the boxes I needed.  They were right there, waiting for me.

Take Time Off and Focus on the Now

Like I said above, Nate was fortunate enough to be able to take a week off of work before moving.  If you’re able to do that I would HIGHLY recommend it!  We were able to get last minute packing done together, we were able to explore Portland and visit our favorite places on final time, and we were able to just have time to sit back, relax, and enjoy one another.  We made sure to limit the amount of time and energy we spent on what was coming with the move and focused on the time we had in Portland in our final days.

If you’re at all able, DON’T MOVE ALONE!!!!  Even if it’s hard for you, ask others to help you pack up the moving truck and unload the it when you get to your final destination!  Along with someone from church, we were so fortunate to have Nate’s parents come down to help us pack up our moving truck, help drive the truck up north (since we were each driving our cars), and help us unpack here in our new home.  We moved on a Monday so it was really hard to find friends who weren’t working that day but, thankfully, we had enough help in Portland!  We were also so fortunate to have members of the church Nate’s working at come to our new house and help us unload the truck!  It took no time at all!

Above all, don’t focus so much on the moving and focus on enjoying your time in the place you’re leaving and enjoying your new home as well!  Moving doesn’t have to be a struggle!  It can be a blast!

Your Turn:
What are some things you’ve learned when you’ve moved?
How many times have you moved in your life?
Prev Post Next Post