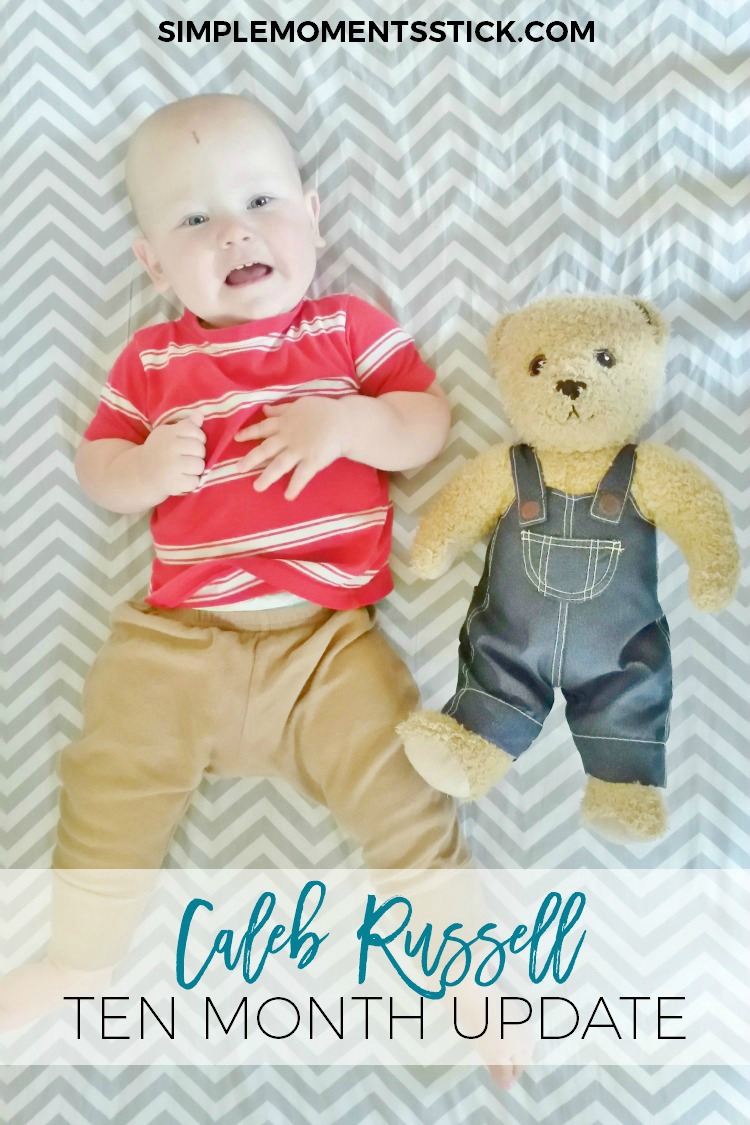 What a little goober.  My little guy is such an adorable, rough and tumble little guy who loves wrestling, being thrown in the air, and hanging upside down.  Caleb has absolutely no fears which means we have to keep our eyes on him at all times.  Each month is more and more fun as we get to know our babe’s personality.

Weight: Unknown since his next doctor’s appointment is at twelve months (Up from 23 lb 7 oz)

Height: Unknown since his next doctor’s appointment is at twelve months (Up from 29.75 inches)

Sleep:  Moving has been the worst thing ever for Caleb’s sleep.  The move was an adjustment and then Caleb got a yucky little stomach bug.  Ever since then he’s been back to waking up three times a night!  It’s pretty much the worst.  Caleb’s also back to taking three naps a day – usually two 45 minute naps and one one and a half or two hour nap.

Likes:  Crawling, Standing up, Walking around holding onto furniture Someone helping him walk, Chewing on cords, Driving his car around, Looking at himself in the mirror, Trucks, Brushing his teeth, Eating everything, Being attacked with kisses by mommy and daddy, Wrestling, Playing with his toys, Pulling people hair, Mama’s boobs, Daddy, going for walks in his stroller, Bath time in the real tub, “Talking”

Dislikes: Being Tired, Mama and daddy trying to help him eat, Bottles, Being told he can’t chew on cords/put his fingers in the fan, Putting himself back to sleep in the middle of the night

Clothes:  Caleb is still in size 4 diapers and has stuck with wearing both 9 month and 12 month clothes.  He’s getting taller but is thinning out so I think he’ll be in these sizes for a while.

Milestones:  Every month brings so many changes to my little man!  He’s an absolute pro at standing up while being supported and is just starting to be able to spend a few seconds at a time standing up without any support.  I think he’ll be walking before he’s one!  He’s enjoyed getting to know our new house and his favorite place to crawl to is the bathroom.  We have to make sure the door is shut at all times or we can be sure that’s where he’ll go.  Since we moved he’s been taking his baths in the real tub and he’s having so much fun crawling around in the water, dunking his head under (with us there to insure he doesn’t keep his head anywhere it shouldn’t be for too long), and splashing.  Caleb’s becoming more and more rough and tumble as he gets older.  He loves being thrown around, wrestling matches, and all other rough play.  He’s absolutely fearless and has already got a few cuts and bruises to prove it.  The night before we moved we had to take Caleb to the urgent care because Nate tripped over him and he was acting like his arm really hurt.  It turned out, after a few x-rays that showed no fractures, that he had dislocated his elbow.  One little pop back into place and he was good as new.  Since I’m trying to get involved here I’ve been able to leave Caleb with Nate a few times.  Caleb still absolutely refuses a bottle but we discovered that he’ll drink from a turkey baster.  While I’m gone Caleb gets his food from a turkey baster and we’re not even sorry.  We’ve started putting Caleb in the church nursery more consistently but, unfortunately, he only lasts about half the service before he realizes Nate and I aren’t there and then he begins throwing a fit.  Some weeks we just leave him there but some weeks (the weeks I hear him all the way in the sanctuary) I go get him and hang out with him in the foyer.  He always ends up beings perfectly fine crawling around with me there and I can finish listening to the sermon from there. Little guy, you are absolutely and completely my little monster and I absolutely love it.  As exhausting as you are I wouldn’t change it for the world!  I have so much fun with you, watching you explore and learn.  You have such a silly sense of humor and it’s fun watching you start to understand games like peek-a-boo.  I absolutely cannot believe you’re already ten months old.  It seems like I had you just yesterday but it also seems like you’ve been a part of my life forever.  You have such a special place in your mama’s heart and I’ll love you forever and a day!
Read More
One Month
Two Months
Three Months
Four Months
Five Months
Six Months
Seven Months
Eight Months
Nine Months

Your Turn:
What was your little one doing at ten months?