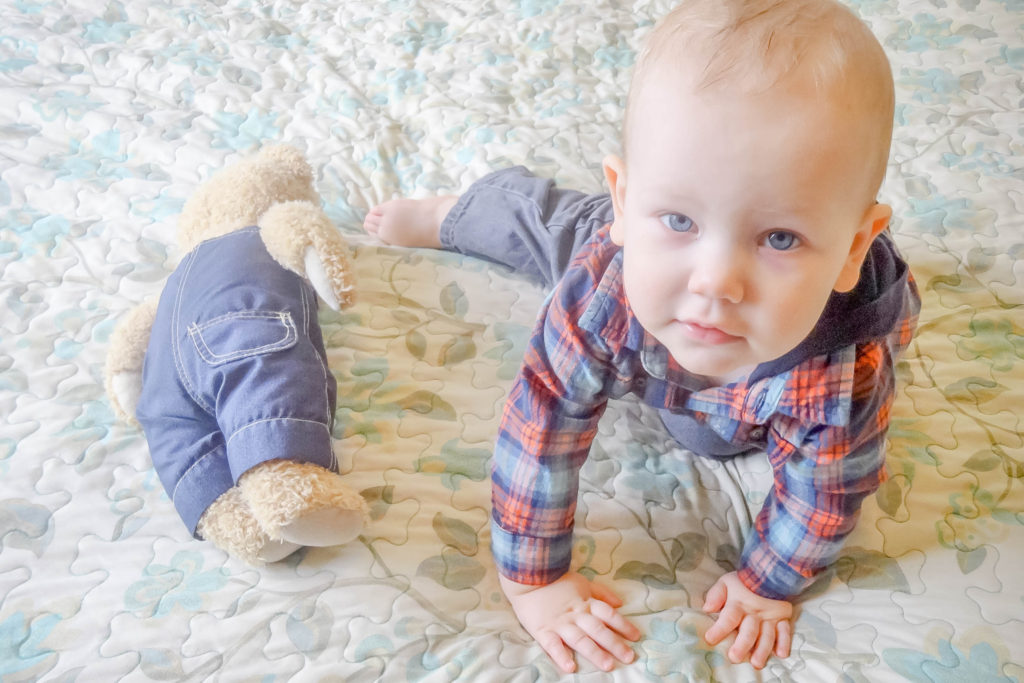 Today my little man is fifteen months old.  I’m amazed by how fast the time is going and how big and smart he’s getting!  I definitely miss doing his monthly updates so decided that I’m going to do a monthly update every three months – at least for a while.  (Of course I’ll include his bear in the pictures too!)  I can never quite believe the changes that occur in such a short span of time and, although these posts are really for me and for him when he gets older, I love that so many of you love them (and him) too!

Let’s start out with the big one – no, Caleb is still not walking!  Stinkin’ stubborn head.  He’s been cruising around tables and couches like nobody’s business for months but refuses to walk unless he’s holding on to something.  He also HATES walking with us holding his hands.  If we try he immediately flops down and whines.  He’s absolutely fully capable of walking and we all know it but he just won’t do it.  I guess he just thinks he can get everywhere faster by crawling and he’s probably right.  He’s probably waiting until we go to Mexico and he’s staying with grandma and grandpa to walk.  I’m resigning myself to the fact that I won’t see his first steps.

Caleb may not be walking but he climbs on EVERYTHING!  Chairs, tables, coffee tables, big toys… You name it, he’s climbing on it.  He falls every so often but gets himself up quickly and does it all over.  We have to make sure that anything he’s able to climb on is in a safe location but, for the most part, we just let him climb.

Speaking of climbing…  Caleb’s been going up stairs since October but not he’s finally learned how to properly go down stairs on his own.  Before he’d try to go face first and, thankfully, never did it when one of us wasn’t watching.  I can’t imagine the injuries he could have gotten…  (See further on for the injuries section)  Anytime we’re anywhere with stairs now he’s high tailing his way over there.  It’s exhausting and I’m glad our house doesn’t have stairs!

Music is getting to be even more of a love of Caleb’s he’s always loved listening to music and, for a while, would “sing” along when Nate played the guitar.  He recently got a REAL mini guitar that he adores strumming and will give it to Nate to play as well.  He used to give it to me and I would strum it the way someone who has no idea how to play the guitar strums it but he would take it back.  Now he takes it from me anytime I try to play it and gives it to Nate instead.  He knows what good music sounds like.  😉  He also dances and “sings” when we have music playing or when I sing with him.  Since Nate and I both love music it’s fun seeing that Caleb is already picking up on that love. Caleb weaned earlier this month and it’s wonderful to see him being such a big boy!  He always wants SO MUCH MILK and doesn’t really like water so that’s what we do.  Let’s all say it once again – Caleb is stubborn. Caleb has always loved other kids but recently he’s a little more hesitant to interact with other babies.  A lot of the kids he’s around on a regular basis and his cousins are at the age where they’re just starting to interact with him so it’s a little sad that he doesn’t love it as much any more.  He still is pretty fond of big kids and thinks he’s one of them.  He’ll chase big kids around all day and has a blast doing it.

Separation anxiety has also started up REALLY strong the past month.  Caleb’s had an issue with Nate leaving for a few months (since Nate’s his favorite person in the whole wide world) and he continues to start crying big fat tears when he sees Nate getting his things together to go to work.  I love that they have a special bond but it breaks my heart a little to see him cry every morning.  He’s also started having separation anxiety when he’s dropped off at the church or gym nurseries.  He’ll typically scream for about five minutes and then slowly work his way to being ok playing and, by the time I pick him up, he’s happily enjoying his time with friends.

Caleb still loves people but it takes him a longer time to warm up now.  When we see people who love him we have to give him time to be ok with spending time with and loving on them.  It usually takes about half an hour or so but once we’ve crossed that thresh hold he’s good to get carried around, get hugs, share his toys, and all sorts of things with other grownups that aren’t mama and daddy.

Church is definitely Caleb’s second home.  Since we go there probably four times a week for either an event or just to visit Nate Caleb totally feels like he owns the place.  He loves crawling all around the place and knows exactly where his daddy’s office is.  He also knows where the nursery is but only will go towards it if no one else is there since that means mama or daddy will be playing with him.  Caleb crawls all over the sanctuary, stage, and sound area and loves trying to copy his daddy with what he’s doing.  I think we have a budding worship leader on our hands. If you haven’t picked up on it yet from this post (and pretty much every single post about Caleb for the past 15 months) Caleb is STUBBORN!  He knows what he wants and is going to go for it no matter what.  We’re working on figuring out ways to guide and discipline our little man while also giving him freedom to explore and not squelch his personality.  Nate and I are both pretty easy going parents and allow Caleb to get into and do a lot of things (maybe that’s why he injures himself so often…) but Caleb is definitely learning that when we say “No” we mean it!  (Whether or not he listens when we say “no” is another story…  Hence the figuring out discipline techniques)  We know that God can use stubborn resistance in an amazing way so we do not want to squelch that trait in our little man but boy oh boy can he be exhausting!

Caleb is also extremely thoughtful.  He is a sober little man who is always observing people and things.  Unless we’re wrestling with him or jabbering with him he typically does not smile.  (You’ve probably noticed that if you follow me on instagram)  He’s not a grumpy little guy (usually) he’s just taking in the world.  We can see the little wheels in his head turning and are convinced that his first sentence is going to be something along the lines of “Excuse me, mama, but peanuts are actually legumes, not nuts.”  He is so meticulous about certain things – like eating one kidney bean at a time – and so haphazard about others – like filling both hands with rice and shoving them in his face.

Caleb’s a quiet little guy.  He doesn’t jabber a ton and there have been times where it’s made me worry that maybe he can’t hear well.  Thankfully he does respond to sounds (when he feels like it) so I know that he has the ability to hear – even if that ability is selective.  😉  At around fourteen months he started realizing that he could communicate to Nate and me with grunts and points.  Now whenever he wants something he says “huh, huh, huh” and points to what it is he wants.  I guess it works for now.

Within the past week or two Caleb has started to really get into copying sounds (once again, when he feels like it… common theme with him).  He loves saying “ma-ma” so Nate and I have fun getting him to copy us and “say” I love mama.  We’ve tried to get him to “say” I love dada too but he still doesn’t make the “d” sound very often.  Just in the past few days we think he’s finally figuring out that “ma-ma” means me!  Since he doesn’t jabber much we’re not sure if that’s completely the case so we’re not quite convinced that it’s his first official word yet.  It also seems as though he’s realizing that saying “Bubba” refers to himself.  That might be his second official word…  We’re biding our time to see if we can officially make that call. Is it sad that this is even a category?  Unfortunately for my little guy it is.  He’s a crazy monster who is ridiculously accident prone and, as much as we try to keep it from happening, tends to get hurt.  The biggest injury he had in the past three months actually happened last week.  He was playing at the soundboard at church (since he wants to be just like daddy) and tripped over one of the swivel chairs.  He bonked his chin which caused him to bite his tongue REALLY badly and slice it about 75% of the way through.  Thankfully it stopped bleeding pretty quick and I was told he wasn’t going to need stitches.  It’s already healing up amazingly well and I’m praising God that He created our bodies to heal themselves. Caleb’s still sleeping through the night like a champ.  With all the sleep problems we endured through his short little life all I have to say about that is #winning.

I pray my second baby is a more consistent sleeper. #NotPregnant

Your Turn:
What was your baby doing (or not doing) by 15 months?
Let’s place bets: When do you think Caleb will start walking?