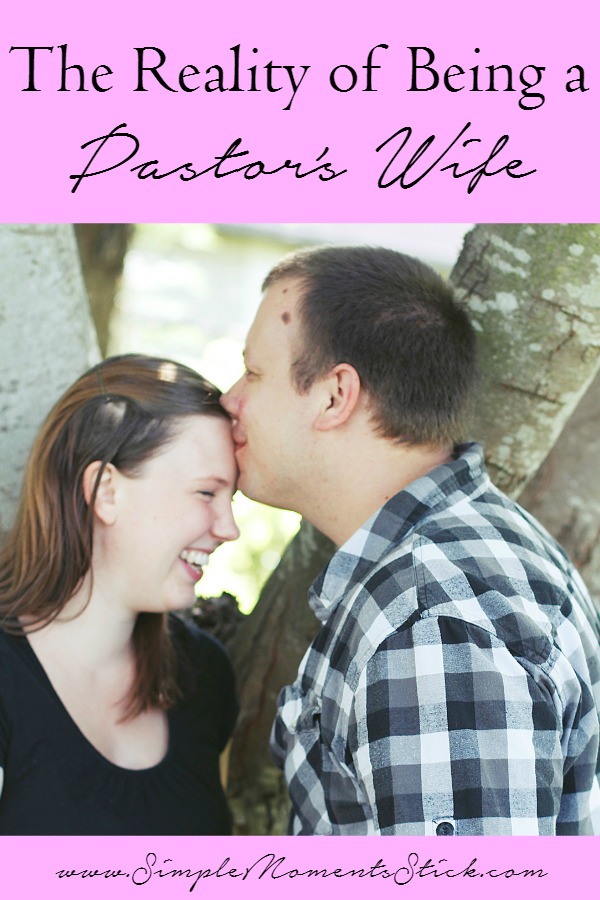 While Nate was in Seminary studying to go into full time church ministry we were told all sorts of things about what it would look like to be a pastoring family.  If I’m being honest, most of them weren’t positive.  People made it appear as though being a pastor was the biggest sacrifice one could make – especially in the lives of their families.

I’ve been a pastor’s wife for six months now and, let me tell you, it hasn’t been anything I’ve expected!  And I mean that in the best way possible!

I was told: Enjoy your husband now.  Being a pastor takes so much time that you’ll never see him!

My Reality:  I see Nate about a million more hours a week then I did when we lived in Portland and he was working at a graphics company.  Granted, that graphics company was insane and didn’t know how to let people have boundaries so he often worked 60-80 hour weeks on top of being in school but it still feels amazing having time with him now!  He definitely works more than 40 hours a week as a pastor but it doesn’t feel like we never see one another!

Beyond the fact that he’s home more often I also go to the church and see him all the time!  If Nate needs help working on some graphics for the slides at church it’s easy for me to just pop over and help him out.  If the children’s ministry coordinator needs help getting some safety measures put in place in the nursery I can head over and help her out – and then see Nate while I’m there!  The youth pastor’s wife is a stay at home mom too so she and I often run into each other at the church while we’re there helping out or visiting our husbands and it’s fun to then just be able to decide to stick around and let our kids play in the nursery.  The church is so laid back and family focused!

I was told: Ministry takes up so many nights and weekends you won’t have any free time!

My Reality:  Ministry absolutely takes up nights and weekends but no more nights and weekends than it took up before we were doing it as a job.  The great part is, though, that we can do most of our night and weekend things together.  Tuesday, Wednesday, and Thursday nights are full of church stuff but it’s totally ok.  Tuesdays Nate and I lead a small group at our home.  Sure it’s church stuff but it’s time spent with one another and other people we know and love!  Wednesdays Nate’s involved in helping out with a few other small groups (have I mentioned that he’s the Worship/Small Groups Pastor?) and I help out in the youth group.  We’re not together but we’re doing ministry as a family!  Thursday nights are Nate’s worship rehearsals but I take Caleb to the church before practice and he and Nate get to have dinner together while I go to the gym.  I usually spend half an hour or so with them before taking off to the gym for my class and, once again, it’s a great family time!

Weekends have also totally surprised us!  Since Nate works Sunday he has Monday off instead but, rather than feeling like we have two weekend days that are split in two, we feel as though we constantly have three day weekends!  Since we’ve always been involved in church stuff on Sundays we’re used to that being the majority of out day.  It’s cool have two days with nothing to do rather than one day and then a day spent at church (which is GREAT, don’t get me wrong!).

I was told: Churches require so much of their pastor’s wives.  Be prepared to have a lot asked of you!

My Reality: Honestly, there are times I wish more was asked of me as Nate’s wife!  The staff and elders are amazing about wanting the wives to be involved but letting us figure out what that looks like and where we feel God is calling us to get involved.  I have to learn to be a little more proactive when  want to be involved or start up a ministry but that’s 100 times better than being told I have to do things!

I think they also recognize that it’s hard to be super involved with a little one!  Since I’m home full time with Caleb sometimes ministry stuff has to be put aside for the time being.  It’s the best being at a church that prioritizes family and knows that Caleb is my priority and a huge ministry in my life!

Your turn:
What are your preconceived notions about ministry families?
Have you experienced something different as a ministry wife?