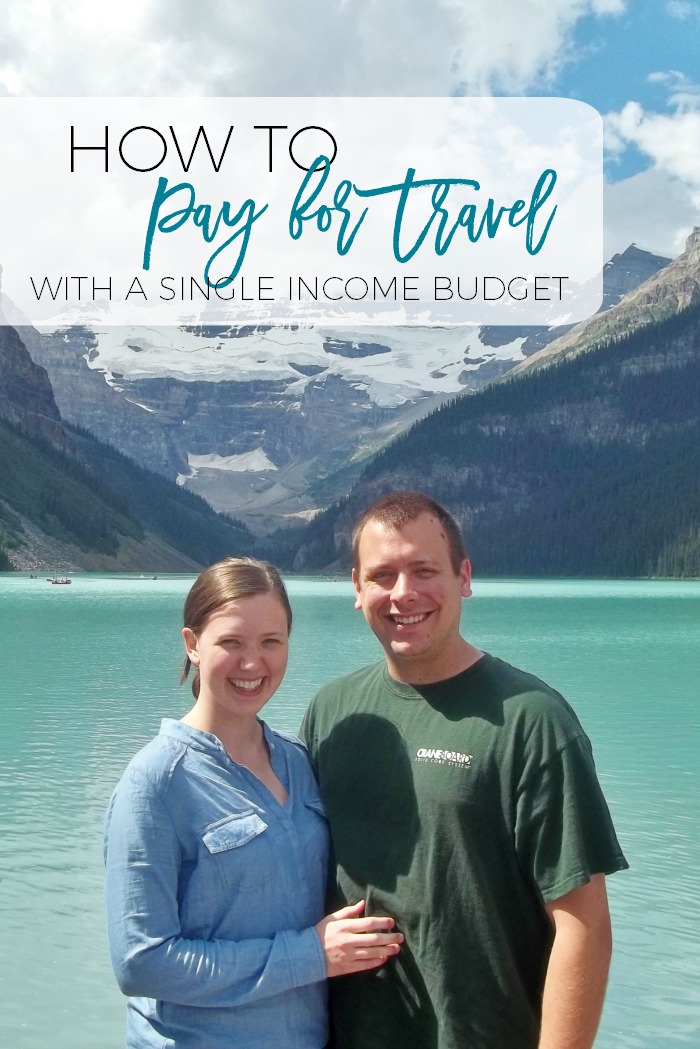 How to Pay for Travel I’m sure you’ve heard it – “I’d love to travel but I just can’t afford it!”  I’ll be the first to agree that absolutely travel is expensive!  That being said, you totally CAN afford it!  Nate and I have always had a tight budget.  We payed for his Master’s degree out of pocket (which pretty much meant my whole paycheck went straight to the school) and then, the month we finished paying for school, Caleb was born and I quit working.  (Sidebar: God’s amazing!  We got pregnant exactly 9 months before our last school payment)  Nate’s a pastor and, let me tell you, pastors are not rolling in the big bucks.

Even so, Nate and I have gone on tons of trips in our almost five years of marriage – both in the United States AND in Canada and Mexico!  Want to know our secrets?  I’m happy to share them!

Let’s get real, flying is EXPENSIVE!!!  If you’re craving a trip but can’t afford airplane tickets check out places that are driving distance (or maybe even take the train!)  Nate and I honeymooned in Leavenworth, WA – a cute little Bavarian town that is about six hours from Portland, OR (where we got married).  The next summer we took a huge road trip throughout the PNW and Canada – making a totally fun road trip out of going to my brother’s wedding in Grande Prairie, Alberta.  We’ve also gone to Bend, OR since that was driving distance from Portland as well.

When You Do Fly, Use Credit Card Miles

Nate and I LOVE our United Explorer Credit Card.  We are committed to living debt free (other than undergrad schooling – which we’re paying off as quickly as possible – and a house in the future) so I’m NOT advocating using a credit card to go into debt.  When we got the cards Nate was working at a graphics company where he spent a TON of money and the company reimbursed him for it.  He put all that money on his credit card and, as soon as he got his reimbursement checks, he payed the cards off.  Beyond that, anytime Nate or I make a big purchase – a purchase that we’ve saved for and have the money in our possession for – we use our credit cards and, once the credit card statement comes, immediately pay it off.  We have been able to pay for the flights for both our trips to Washington DC/NYC and Zihuatanejo, Mexico only using our credit card miles.  If you’re wanting to do this make sure you do your research as to which card is the best fit for you!

Be Flexible with Location and Date

If you’re able to be flexible in traveling you’ll be able to save so much money on flights!  When Nate and I were traveling to Washington DC/NYC we did all sorts of research as to which day of the week would be best.  We ended up flying there on a Tuesday and flying back on a Wednesday because those flights were cheapest.  It also was about $200 cheaper to fly into Washington DC and out of NYC than it was to fly into NYC and out of Washington DC.  For this recent trip to Zihuatanejo, Mexico all we had decided was that we wanted to go someplace warm where we could relax on the beach.  We looked at the price of travel to all sorts of different locations and settled on Zihuatanejo (recommended to us by our former pastor) because it was the one location we looked at where we could afford to get there without paying anything above our credit card miles.  Once again we flew in and out on a Wednesday (including a red eye flight on the way there) because those were the cheapest flights.

Be Creative About Where You Stay

You don’t always need to stay in a hotel!  Nate and I have stayed in AirBnB, we’ve camped, we’ve stayed with friends and family, and we’ve stayed in REALLY pathetic hotels.  On the other hand, we’ve also rented mini apartments, suites, and stayed in adorable bed and breakfasts.  For us it all boils down to the price.  In NYC/DC we decided we’d rather spend our budget on sightseeing and Broadway shows so we stayed in really cheap AirBnB’s in sketchy neighborhoods (think stereotypical Brooklyn…).  In Zihuatanejo, though, we were able to stay in a suite that included a kitchen and sitting area for $22 USD a night.  We figure that for the most part we’re only in the location we’re staying for sleeping so it’s doesn’t need to be a five star hotel.

Nate and I have never rented a car while on vacation.  If you’re heading somewhere without your car, look into their public transportation and/or be prepared to walk!  While we were in NYC/DC I was 10 weeks pregnant (I’m SO thankful I didn’t have first trimester morning sickness!) so we tried to take it a little easier but we still walked ALL over the place and rode the subway and bus.  We also decided to take the Bolt Bus as we traveled from DC to NYC and only payed $19 a person for that trip.

You see, there’s no reason to put off travel simply because you think you can’t afford it!  Just be creative and I guarantee you can figure out a way to make it work! A Weekend in Bend, OR What are the ways you save money on travel?