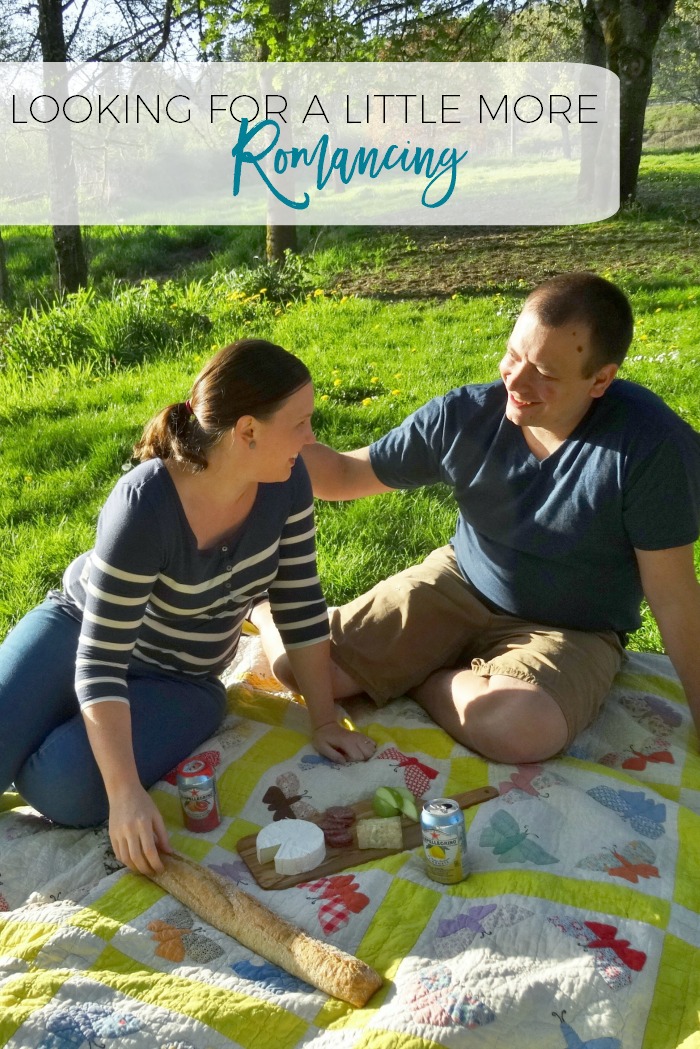 In Need of a Little More Romance? I knew when I married him that Nate wasn’t romantic.  Don’t get me wrong, he was a great guy and had his romantic grand gestures but romance in day to day life was a struggle.  His adorable birthday surprise or the precious proposal he planned took tons of time to plan out and, honestly, left him exhausted and drained but he could do that easily.

I, on the other hand, am a hopeless romantic.  I’ve always dreamed of my prince charming, my knight in shining armor, my one true love.  I get chills when I listen to love stories and smile from ear to ear at weddings.  I love seeing old people still totally in love and knowing that’s what I have to look forward to.  Although I love grand gestures I want the romance in the day to day.

We couldn’t be more different and this has caused many a stressful conversation between us.  Time and again I would address with him that I needed more romance in my life.  I needed to be swept off my feet by the little everyday things.  Nate would listen and agree and then either plan some big grand gesture or the conversation would just fizzle out.  Every two months or so the conversation would be repeated.  Nate was frustrated because he was trying hard to romance me but it just wasn’t working.  I was frustrated because Nate just couldn’t get it and I thought it should be so easy!

All that being said, in the past five years Nate has improved in his romancing by leaps and bounds.  In fact, this weekend Nate planned out a super simple but romantic cheese other yummies picnic at the park during golden hour.  It wasn’t hinted at by me and Nate didn’t feel stressed out planning some huge gesture.  It was perfect for both of us!

How did we get to this point?  How did Nate figure out ways to speak to my heart?  Well, let me tell you!

You may also like: Why is Cinderella Our Heart Song?

I learned to say what I needed

I kept telling Nate I needed more romance and yet I realized that I didn’t even know exactly what I meant by that.  If I didn’t know exactly what I meant how could I expect Nate to know what I meant?  Once I realized that, I was able to take a step back and process things.  I figured out a few specific scenarios of what I meant by romance and was able to explain it to him.  Because I gave him specifics he was able to get a better look into my heart and, from there, could come up with things on his own.  Men aren’t mind readers, ladies, so we need to fill them in on what’s going on in our hearts!

I learned to rely on God

While processing through the specifics of what I needed in the romancing department I also realized that there were times when I was asking Nate to fill the spot in my heart that only God should (and could) be filling.  When I wasn’t spending time with the Lord and letting him speak to my heart I expected Nate to fill that spot.  Nate may be super awesome but he’s not God and, even if he was the most romantic guy on the planet, he still couldn’t fill the God spot in my heart.
You may also like: The Sixth Love Language

Nate made sure he had his priorities straight

Once Nate knew the specifics of what romance looks like to me he had to decide if he was going to do the work it takes to romance me the way I need it.  It doesn’t come naturally to him so it would be so easy for him to throw his hands up and just say that it is something he can’t do.  Thankfully he chooses to fight for me and be the romancer I need.

I needed to find out what kind of romancing Nate needed

Women, we’re not the only ones who need romance!  If I’m expecting Nate to romance me then I need to be romancing him too.  I need to allow him to share with me what romance looks like and then DO IT!  He’ll be so much more willing to work at romancing me if his love tank is filled up. Your Turn:
What type of romancing speaks to your heart?
Does the way you feel romanced line up with your love language?

Join the mailing list and get exclusive discounts
to my Etsy store, Simply You and Baby Too!