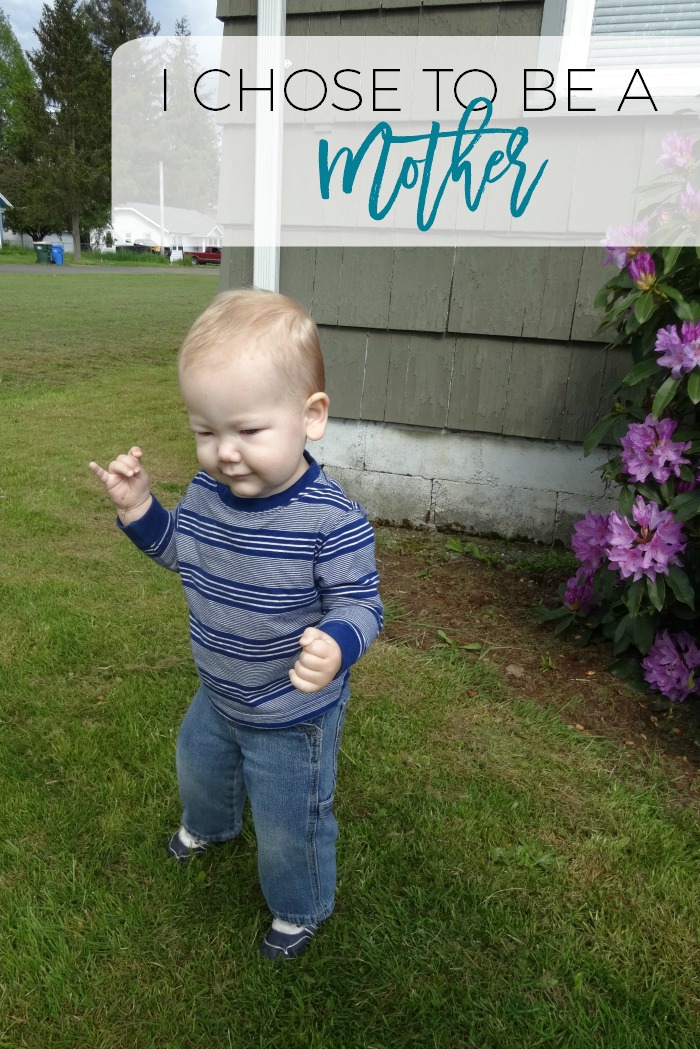 I Chose to be a Mother 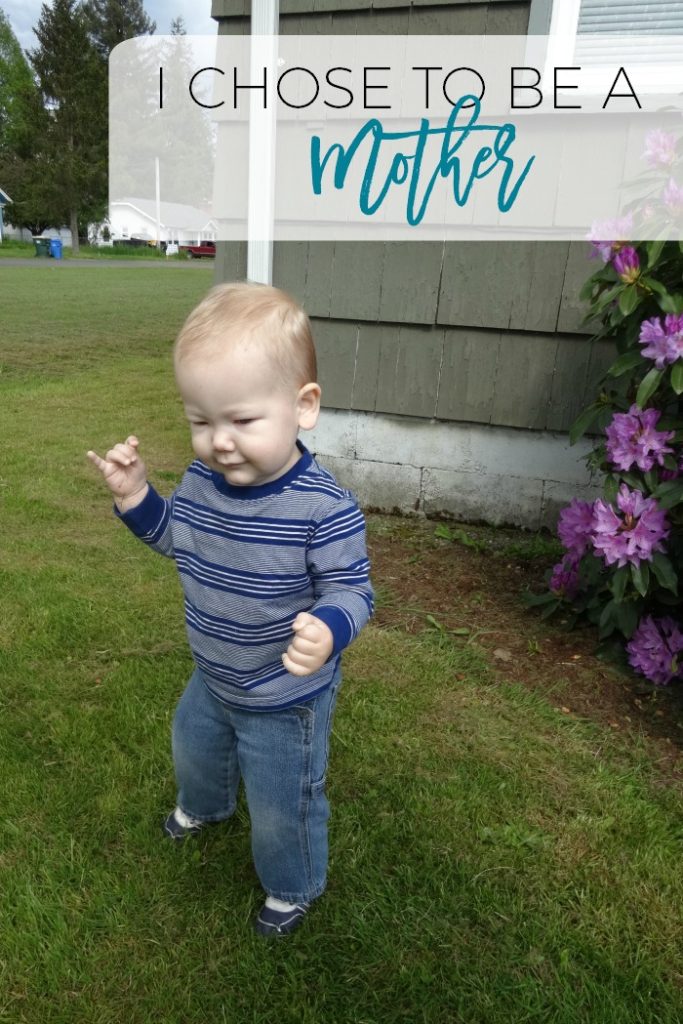 Last weekend Caleb and I went to visit my bestest friend, Heather, and her little girl.  It was a LONG roadtrip (think 8 hours each way) but my little man was a champ and it was totally worth it to spend some quality girl time!

While we were there, Heather and I were chatting about motherhood and the things we didn’t expect regarding it.  I was telling her about Caleb’s craziness and stubbornness and how sometimes it can be SO hard to care for him in a gentle manner.  It would be so much easier to give him a swat or yell at him but I choose time and again to not do that because I chose to be a mother.  I made the choice to lay aside my desires and be there for this little man.

Heather stopped the conversation and said to me that what I had just said was a huge deal.  I CHOSE to be a mother!  Sometimes women forget that.  Every single woman who is a mother chose to be one.  Yes, maybe the woman did not choose to get pregnant, but as soon as she decided she wasn’t going to terminate the pregnancy or make an adoption plan for her child she ultimately decided that she was going to be a mother!

Children do not run our lives but we do have to lay so much of ourselves down to care for the little ones.  Raising children is a huge deal and, because we chose it, we should also delight in it!  Each one of us had the opportunity to make another choice and we didn’t!

Important Sidenote: I don’t mean this post to hurt those of you who are not mothers.  To the women who chose an adoption plan for your child, I want to honor you on this Mother’s Day as well!  I’m sure that was an excruciating decision and I’m so proud of you for choosing to put your child first!  To those women who chose to terminate their pregnancy, I love you!  I may not agree with the choice you made but I know I was never in your shoes and am not going to stand in judgement over you.  If you’re grieving the choice you made, I’m praying for healing for your heart!  To the women who haven’t been able to have children yet, I grieve with you and pray that the Lord will bring a child into your life, whether naturally or by adoption, who you can love and raise!

———–
I asked some other bloggers to share thoughts on how they chose to be a mother.  I loved that some were funny, some serious, and some heartbreaking.  I hope you enjoy!

It took a really long time, and I didn’t know HOW it was going to happen. It didn’t matter if it was going to require IVF, adoption, fostering, or just fiercely loving the other kids in our life… I chose to be a mother. ~ Katie from Always Katie


You never know what being a mom will always involve from day to day, but I have never regretted it one single second. She truly is my priceless treasure from God. I have learned more about unconditional love, patience and life because I chose to be a mother. ~ Sheila from Jesus Glitter


How can two little humans manage to ruin me yet complete me every single day?  For that, I chose to be a mother. ~ Ashley from My Dear Hart


My first baby was born right in the middle of finals week and I spent the first year of his life working full time and completing my Bachelor’s degree. In the middle of my final and busiest semester of school, we found out that we were pregnant again. I endured morning sickness and first trimester exhaustion while working full time and finishing the last four classes of my degree. It hasn’t always been easy or convenient but it has definitely been worth it.  I’m so happy I chose to be a mother! ~ Amberley from A Prioritized Marriage


Being a mom is being a sleep deprived zombie and never being able to use the bathroom or shower alone, but I chose to be a mother. ~ Natasha-Ann from The Fresh Heart


Being a mom means I cry, get frustrated, and have limits tested, but it also means I get to make memories, laughter, and moments I will cherish forever with my kids.  My kids give me something new to appreciate every single day.  I’m so glad I chose to be a mother. ~ Toni from A Daily Dose of Toni


I was raped. I became pregnant. I chose to be a mom – BEST decision I ever made. She is a reminder of God’s sovereignty – every single day. I’m so thankful I chose to be a mother. ~ Karyn from Saturated in Seattle

I celebrate the flying nerf bullets, unexpected ninja moves, stepping on Legos, and crazy loud wrestling matches because I chose to be a mother. Jaime from The Celebrating Mama

I became a mom 34 years ago and I learned a brand new kind of love. It was like nothing I’d known before. Now I have an 18 month old grandson and am living ANOTHER new flavor of true love that I never knew was possible! I am so thankful I chose to be a mother! ~ Susie from Recovering Church Ladysmile emoticon

Life with triplets is filled with so much love and laughter. It’s also filled with 20,000+ diapers changes, tantrums x3, and enough snot to fill a bathtub, but I chose to be a mother. ~ Angela from The Triplet Farm


It’s weird to have your heart walking around outside your body, but I chose to be a mother. ~ Robin from Snippets of Faith


Some days are a bit hectic and a lot of crazy, other days I feel like I’ve got this motherhood thing down. Some days I am counting the hours to nap time, and other days I am fighting the urge to wake them up for one more snuggle. Some days are full of lots of tears, and some days are full of never ending laughter. But everyday I realize I was made for this and I wouldn’t have it any other way, over and over again I choose motherhood.  I love that I chose to be a mother! ~ Ally from You Are More


I fought for you, harder than I’ve ever fought before. We sure were victorious, but I didn’t enjoy that war. I’ll forever love you more than any other. I didn’t choose to be a warrior, but I chose to be a mother. ~ Alexandria from Naturally Made with Love

I didn’t choose to have to clean up poop off the walls and floors during a diaper-change explosion, but I chose to be a mother. ~ Julie from A Hopeful Hood


I didn’t finish college, I turned to diapering, sleepless nights, pillow fights, and small children in my bed instead. If you asked me would I trade my life and go and get another, my answer would be a big fat no because I chose to be a mother. ~ Mindy from Oil of Myrrh


The enemy has tried to steal my babies and my joy, but God said I can have what I ask in Jesus name…So I chose to be a mother. ~ Cate from Mary from Martha


I didn’t know motherhood would include heartbreak and loss, with four miscarriages, but I am so thankful for my two living children. They make it completely worth it that I chose to be a mother! ~ Kristen from The Essential Family


I knew there was a good chance she’d be opinionated, independent, confident – because it’s in her genes… but I chose to be a mother. ~ Traci from Traces of Faith


Usually motherhood is hard. Some days it’s spending the day in chik-fil-a surrounded by other moms who also wear their hair up in buns or loosely pulled ponytails and buy their kids happy meals only to throw the whole thing away. Some days it’s cleaning garlic powder out of your clothes drier. But the “I love you mama” I get to hear early every morning until way past bedtime makes it all worth it. I’m very glad I chose to be a mother. ~ Morgan from Blessed Messes


Being a mom means lots of diaper changes and dirty dishes. It means playing games and having silly dance parties. It means giving my heart to each child, and not demanding anything from them. Motherhood brings out the best and the worst in me. But I would never change the moment I chose to be a mother. ~ Larissa from The Larissa Monologues


I didn’t know that it’s harder watching your children going through difficult times than it is going through them yourself. I didn’t know how much I would ache to be able to take away their pain, but learning to trust God for my children as well as for my own life was in God’s plan when I chose to be a mother. ~ Suzanna from Wonder Filled Days


I didn’t know that I would lose myself to postpartum depression and come out stronger when I chose to be a mother. ~ Elizabeth from Mommy Gone Tropical


Could I have lived without the teething pea-soup diaper changes in the middle of the night, the blood and bruises and ER visits, pee-stained bathroom floors, helping with math and English and science homework, projectile vomit, the nights of worry waiting up for my teen, the tears, the fears, and the girlfriends? Probably. But being a mother isthe best thing I ever could have been.  I’m so glad I chose to be a mother! ~ Christy from My Mustard Seed Life


I didn’t choose to have gray hair at 25 or live on 10 hours of sleep per week but every moment is completely worth it and I’m happy I chose to be a mother. ~ Jessica from Savings Aplenty


I spent nine panicky months convinced I was going to be a terrible mom. Turns out, apart from the late, unpredictable hours, a lowered standard for personal hygiene, and virtually no alone time, it’s a pretty great gig. I’m so glad I chose to be a mother. ~ Leah from Love and Blues

Your Turn:
What would your “I chose to be a mother” quote say?
How are you celebrating Mother’s Day?