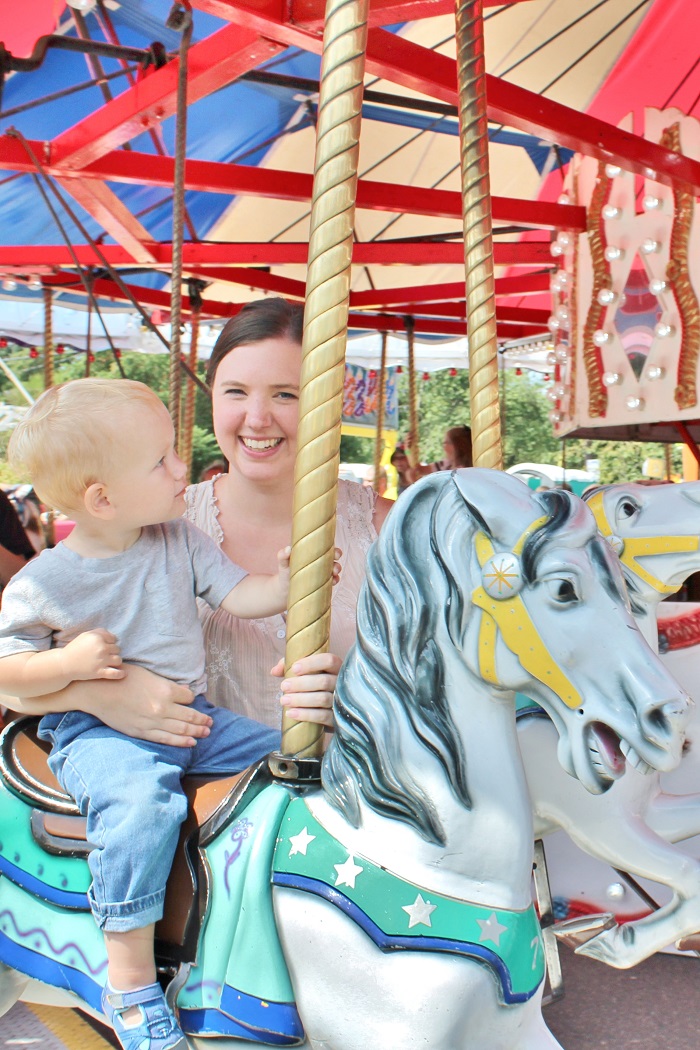 Caleb adores his grandparents so he’s a fan of visiting them (or them visiting him) whenever possible!  This weekend was one of those weekends when we decided to take the two hour trek up to Lake Stevens, Washington to spend time with them.

It just so happened that the weekend we were going to be there was Aquafest, a community event that Nate grew up attending every few years that included parades, live bands, fair food, rides, and so much more!  We decided to head down there Saturday afternoon and, amazingly, the parade was moments from beginning!  Caleb had attended a the lighted tractor parade last Christmas but this was the first parade that he was really into…  Well, maybe it was just the candy and balloons he was given that he was into… 😉  We enjoyed it too since we ignored the fact that 50% of the parade was politicians and focused on the fun stuff. #SoOverPolitics 😉

After the parade we walked through the events and decided that, of course, Caleb needed to go on a ride.  He was too little for everything other than the carousel so on he went!  He was so excited (and it was close to nap time) so he threw a fit while sitting on the horse waiting for the ride to begin.  He loved the ride while it was going on but then, after it was done, a fit happened once again.  We knew that meant it was time to head home and put the kiddo to bed.

It was so much fun getting to be a part of the community in which Nate grew up and, even though we didn’t know people there (other than being seen by one of Nate’s high school friend’s husbands who didn’t say hi… *cough*lame Kobi*cough*) it was fantastic reliving some of Nate’s childhood memories and sharing them with Caleb.  Sharing Nate’s (and my) memories with Caleb is something we’re definitely going to continue doing! Your Turn:
What community events are you involved in with your community?
What’s your favorite fair food?