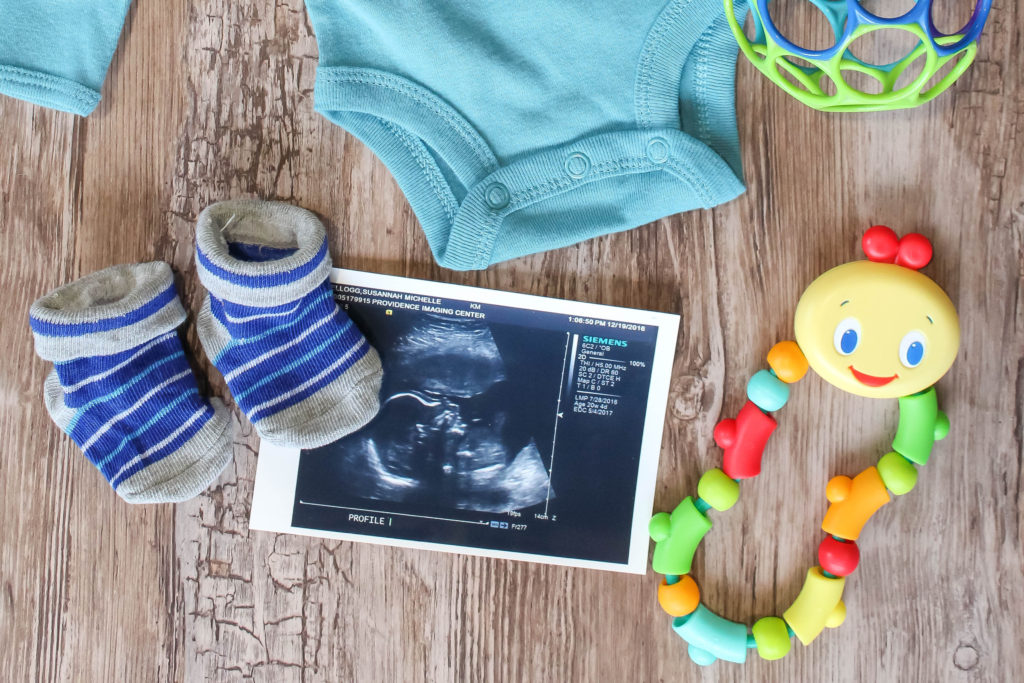 24 Weeks of Pregnancy with Josiah 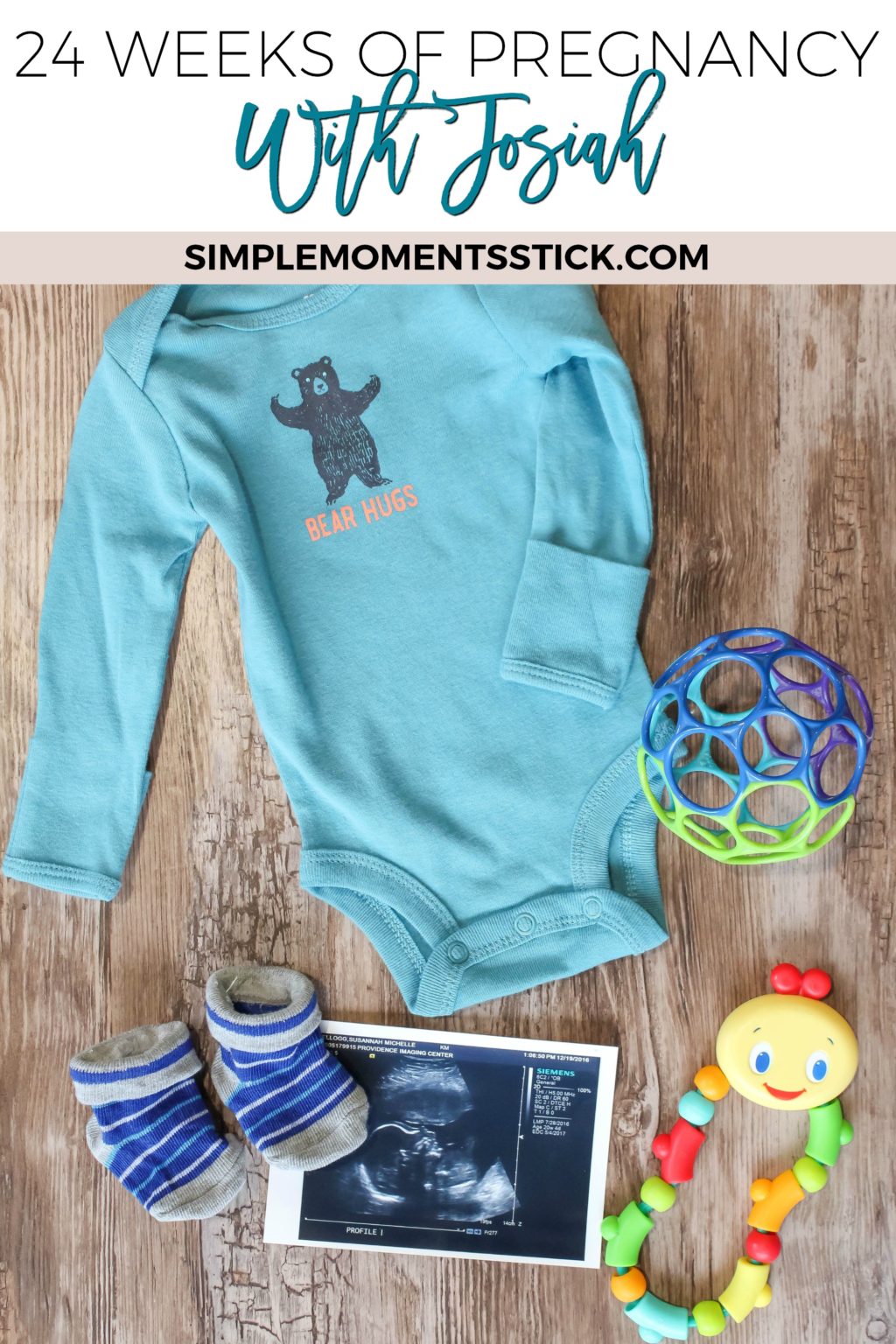 I am over halfway through my pregnancy and I’ve realized that I haven’t done a single bumpdate on the blog!  Poor second kid, I’m already proving that I’m not going to be as awesome of a mom with him…  Sorry Josiah!

Since I love looking back on my pregnancy with Caleb, it’s high time I write about this pregnancy!

How We Found Out

I was pretty paranoid about the Zika Virus so Nate and I decided we would start trying for baby #2 after our trip to Mexico.  If we had gotten pregnant right away, we would have our little one right around when Caleb turned two, which seemed perfect to me!  I wasn’t expecting to get pregnant right away since it had taken four months of trying with Caleb but I was hopeful.  The second month of trying was at the right timing that I could take a pregnancy test on Mother’s Day.  I did and, surprisingly, it was a faint positive!  Long story short (read this post for the whole story), for some reason I didn’t feel as though I was truly pregnant and, sure enough, the next day I knew for sure I wasn’t.  The early miscarriage through me for a loop a little bit but, thankfully, my spirits were kept really positive.

After six months of trying, we finally got our BFP!  Like with Caleb, I had planned out a fun way to tell Nate that I was pregnant but also like with Caleb, I just called Nate into the room and handed him the pregnancy test!  And so it began again!

Oh my goodness, you guys, the first trimester was rough this time around!  With Caleb, I felt great the whole pregnancy!  We even went on a trip to NYC and Washington DC when I was 9-11 weeks pregnant and I was up for anything, even bike riding in Central Park.  I never would have been able to travel with this pregnancy!

Starting at about 6 weeks I got sick.  I wasn’t throwing up but, in a lot of ways, I wished that I had been throwing up.  I was so nauseous and felt as though throwing up would have helped.  All I wanted to do was sleep but, since it wasn’t recommended that I take melatonin like I typically do, I was having such a rough time sleeping.  Watching a toddler, feeling sick, and being exhausted was horrible!  When I was visiting my mom in Spokane with Caleb I threw up once for the first time since third grade!  No longer vomit free since ’93 (ok, not ’93 but you get the idea…)

As all this gross feeling was accumulating, my fall seasonal depression reared its ugly head and made me feel even worse and more gross.  Thankfully my doctor was able to suggest taking Unisom for the sleep problems and some Omega 3 and other natural solutions for the depression.  Getting all that sorted out really helped me feel better about life and better about my pregnancy.  Gotta love doctors!

Because of how sick I felt I was certain Baby K 2.0 was a girl…  and we all know how that turned out…

As the second trimester began, my morning (all-day) sickness ended suddenly.  #PTL  I am still really tired but that comes with having a toddler more than being pregnant.  It’s amazing that it ended so quickly.  I had heard of that but was skeptical.  Skepticism over.

Right on schedule (with Caleb it began right about when the second trimester began), my hips decided they hate me and wanted to cause me all sorts of pain.  Thankfully, Nate had bought me my boyfriend for my birthday (aka The Snoogle) to help me sleep and it has been a lifesaver for my hips!At my ultrasound it was so good to see everything was great with my little guy and it was awesome to get to find out that he IS a little guy!  We found out, though, that the umbilical cord is not entering the placenta at the proper place so Josiah isn’t getting all the blood he should be getting.  For now everything fine and he’s measuring a week bigger than he’s supposed to but I’ll be getting a few extra ultrasounds from here on out to make sure he’s gaining the size he needs and is continuing to be healthy.  If you could join me in praying that he’ll keep growing well and will be able to go full term that would be awesome!

As of 23 weeks, I have only gained 8 pounds and I’m so excited about it!  I had gained quite a bit more than that with Caleb by this point.  I am eating better this time around but I think part of it is that I started with a lot more fluff this time around too…

How Does Caleb Feel About All This?

Caleb is insanely obsessed with all things baby!  At first when we tried to explain that I was pregnant it went way over his head.  I still don’t think he completely understands how there’s a baby in mama’s stomach but he tries so hard.  All day, every day he goes around the house saying “baby, baby, baby.”  My mom got him a baby doll for his birthday and he carries it around with him, feeds it, and has to take it to bed!  It’s totally adorable!  Caleb always wants to lift up my shirt, poke my belly button, and say “baby” and it’s kind of awkward to try to get out of him doing it in public.  Caleb also knows that the spare room is the baby’s room and, although he won’t say “Josiah,” he yells “baby” whenever we say the name Josiah.  Needless to say, he’s totally excited to have a little brother.  We’ll see how he feels when Josiah actually arrives and he’s not the center of attention anymore…

I’m excited to see how the rest of this pregnancy goes and am beyond excited to meet my little man!

Your Turn:
Were your pregnancies alike or different?
How far apart are your kids in age?