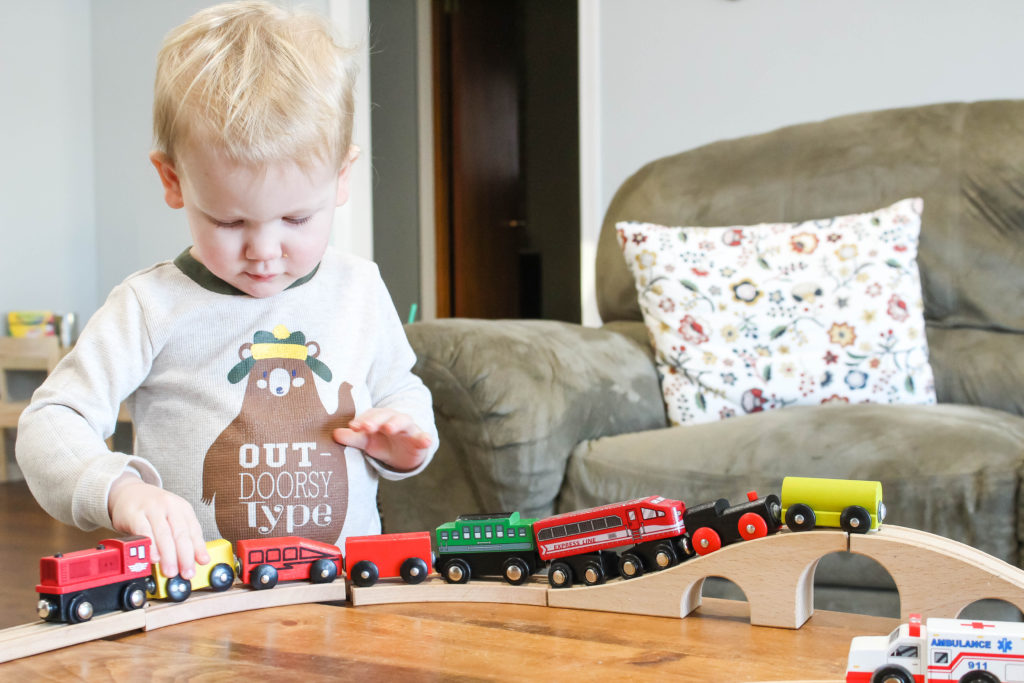 When Your Toddler Doesn’t Talk It can be hard for me to admit when I’m struggling.  It’s hard to admit when life has broken me down and made me question myself and the way I do things.  I want to appear strong, appear as though I have it all together, appear as though I know just what I’m doing but the truth is, more often than not, I have no clue what I’m doing.  Mothering has added more of those moments than I’d like to acknowledge.

At eighteen months, my little guy was still not talking.  He had yet to say more than two or three words and it was getting concerning.  His little buddies were starting to jabber away and he was still silent.  Ok, not silent…  Plenty of grunts and jibberish was coming out of his mouth but nothing that resembled any sort of language.  Caleb’s pediatrician recommended getting his ears checked and even taking him to speech therapy.  Sure enough, his ears were full of fluid and tubes were placed, helping him hear so much better.

By twenty one months, Caleb was saying about a dozen words and signing three words.  Grunting and pointing was still his primary mode of communication.  He heard us just fine and yet refused to copy what we were saying.  More and more doubt crept into my heart.  Should I not respond to him when he grunts?  Should I be doing something different during our play time to help him learn words?  Am I not talking to him enough?  It he getting too much screen time?

Caleb’s birthday came and still he was only saying maybe two dozen words.  Sure, he could tell us what every animal on the planet says and made a noise for every vehicle he saw but words were still evasive.  We saw two different speech specialists and neither of them really had great advice for us.  He was hearing fine, at the high average mark for understanding what we were saying, and yet he just wasn’t talking.  It was a choice.  He just didn’t want to talk.

In the past two months he’s picked up a few more words.  He’s said three two word sentences.  He’s starting to kind of want to try.

But still he communicates in mostly grunts and hand gestures.

There are times when I can take it all in stride.  Times I remind myself that this is the kid he is – He is stubborn.  He does things in his own timing.  He waits until he can truly do something before he does it.  This is the child who never toddled.  This is the child who waited until he was 18 months to walk and, within a week, was running.  I shouldn’t want to change who he is.

I’m slowly learning that this is motherhood.  The concern for our kids and the desire to see them succeed will never go away.  The worry that we’re doing something wrong and the comparing will never go away.  I’m learning, though, that I can’t let it take over my life.

He is a sweet, gentle hearted little boy who loves his da-da with a passion, adores me, and finds joy in his friends.  He is a child who goes through obsessions – currently it’s choo-choo’s and babies – and wants to bring me into his obsessions with him.  This is a kid who loves giving hugs and kisses, adores wrestling, and always wants to cuddle.  My child can sit and focus forever on figuring out who things work, put together train tracks and puzzles, and wouldn’t mind being read to all day, every day.

Caleb is Caleb.  To ask him to be different would only hurt him.  I need to practice patience, take joy in who he is, and smother him with love.

The talking will come and someday I’m sure I’ll be begging him to shut up. Your Turn:
Did you have a late talker?
What is your biggest motherhood insecurity?
Raising Them WellToddler