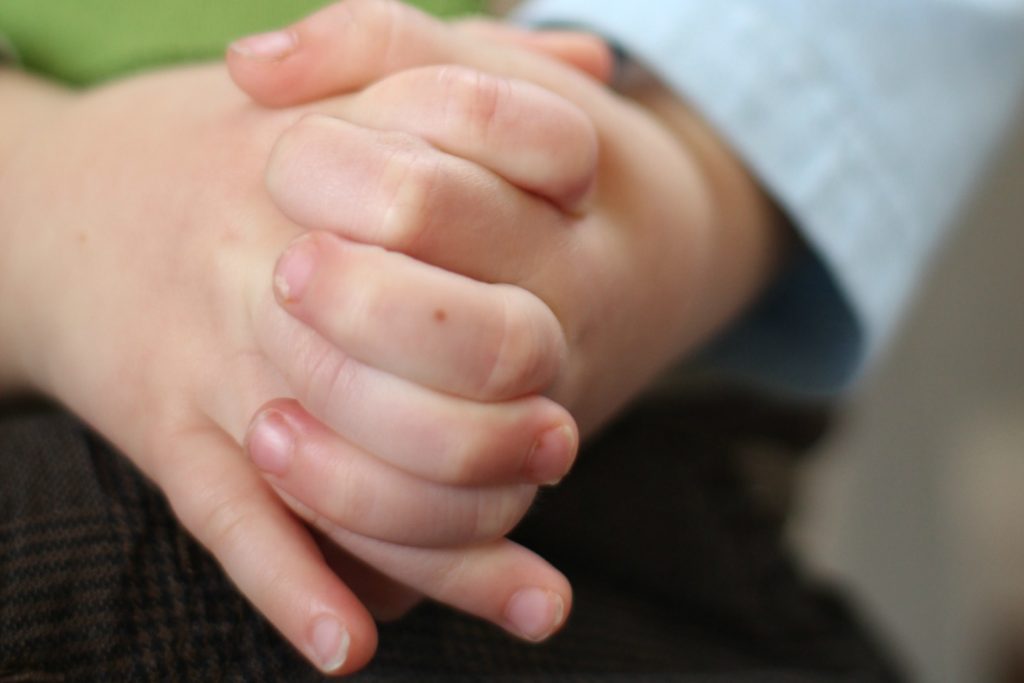 How to Teach Your Toddler to Pray

Teaching your child how to pray doesn’t have to be hard!  Just like we each learned how to pray slowly, our kids learn that way too!  Find out how to teach your toddler to pray the non-overwhelming way! Raising children to follow the Lord is a huge calling in the life of any Christian.  Nate and I try to do everything we can to teach Caleb about our faith and, although we know there will reach a point in his life where Caleb has to choose what his religious beliefs are, we are raising him in our beliefs and desire with all our hearts that he comes to understand the love, grace, and sacrifice of Jesus the way we do.

For now, Caleb loves everything about our faith in Jesus.  He loves going to church, he adores having us read to him out of his children’s Bible (right now the story of David and Goliath is his favorite), and he wants to pray all the time!  Seeing that Nate and I desire to communicate with God through prayer, Caleb has been surrounded by prayer ever since the day he was born.  Even so, it was hard for me to think through how to teach him about prayer.  Thankfully, things have unfolded naturally and prayer is an integral part of his life now too!

Maybe you’re in the same boat.  Are you wondering how to teach your toddler to pray?  I don’t have all the answers but here are some basic guidelines to help lead you on your way.

How to Teach Your Toddler to Pray

Like I said, Caleb has been surrounded by prayer since day one.  We’ve always prayed with him before he goes to sleep, he sees Nate and I praying together and separately, and we (often) pray before meals.  Not only that but he sees other important people in his life praying.  He sees his grandmas and grandpas praying.  He sees his friends parents praying.  He prays during Bible story time in the nursery at church.  Kid knows about prayer.  One night, as Nate and I were sitting down to eat, Caleb folded his hands and closed his eyes and we realized he wanted to pray!  He was initaiting it!  So, Nate prayed a prayer of thanksgiving for our food and, after he was done, Caleb unfolded his hands and said “nah-nee” which we’ve come to discover is his way of saying “amen.” (Someday my toddler will actually talk…)  It was never something we told him to do, he just learned by watching and, all of a sudden, he was ready to join in!

Encourage the Child to Join In

Once your child is ready to join in on prayer time, make sure you’re encouraging it!  We pray at meals now more than we ever did before he was wanting to join in on prayer because we know that’s a great way to encourage it.  Throughout the day Caleb will randomly fold his hands and motion for me to do the same and have me pray.  Although it can be kind of silly to stop in the middle of the grocery store to pray with your toddler, if he wants to do it, just do it!  Obviously I’m not spending half an hour in prayer in the middle of the grocery store with my toddler but I do want him to know that we can pray anytime and in any place and that it’s always an appropriate thing to be doing.  At bedtime Nate or I will ask Caleb what he wants to thank Jesus for and then we’ll pray for that with him.  Typically it’s “mama” or “dada” or “baby” but every so often he’ll throw a “papa” or “bubbles” or “crackers” in there for good measure.  No matter what it is, we join him in thanking Jesus for it.

Explain Why We Talk to Jesus

Although a two year old really can’t understand the theological implications of the death and resurrection of Jesus, it is important to explain as age appropriately as possible why it is we talk to Jesus.  It can get tough to word things in a way that toddlers will understand but Nate and I focus on how much Jesus loves Caleb and that Jesus wants Caleb to love him too.  As he gets older and can understand things like Jesus taking the punishment for the bad things Caleb does we’ll add that into how we explain it to him until gradually we can talk to him about the death and resurrection of Jesus and how that is what frees us from our sins and allows us to accept his Amazing Grace.  For now we tell Caleb that we talk to Jesus because we love him and he loves us.

We never want to force any aspect of our faith onto our child and I don’t think any parent should do that.  Unfortunately, down the road, that can lead to resentment and hurt and we don’t want that for our child.  In my opinion, encouraging is quite different than force and I’ll encourage my little man all day every day.  Right now the things that we never force are closing eyes and folding hands.  Nowhere does it say that you have to do that in order to talk to God so I’m not going to make my kiddo do that.  Caleb often will fold his hands and close his eyes to begin with but gradually his eyes squint open and, by the end of the prayer, he’s no longer pretending to have his eyes closed and, often, he’s starting to eat his dinner.  As he grows up the eating his dinner part is gonna have to go since that’s not allowing him to focus on the prayer but for now I’d say he’s good!

Your Turn:
How are you teaching your child how to pray?
How do you explain Jesus and what He did for us to your toddler or child?