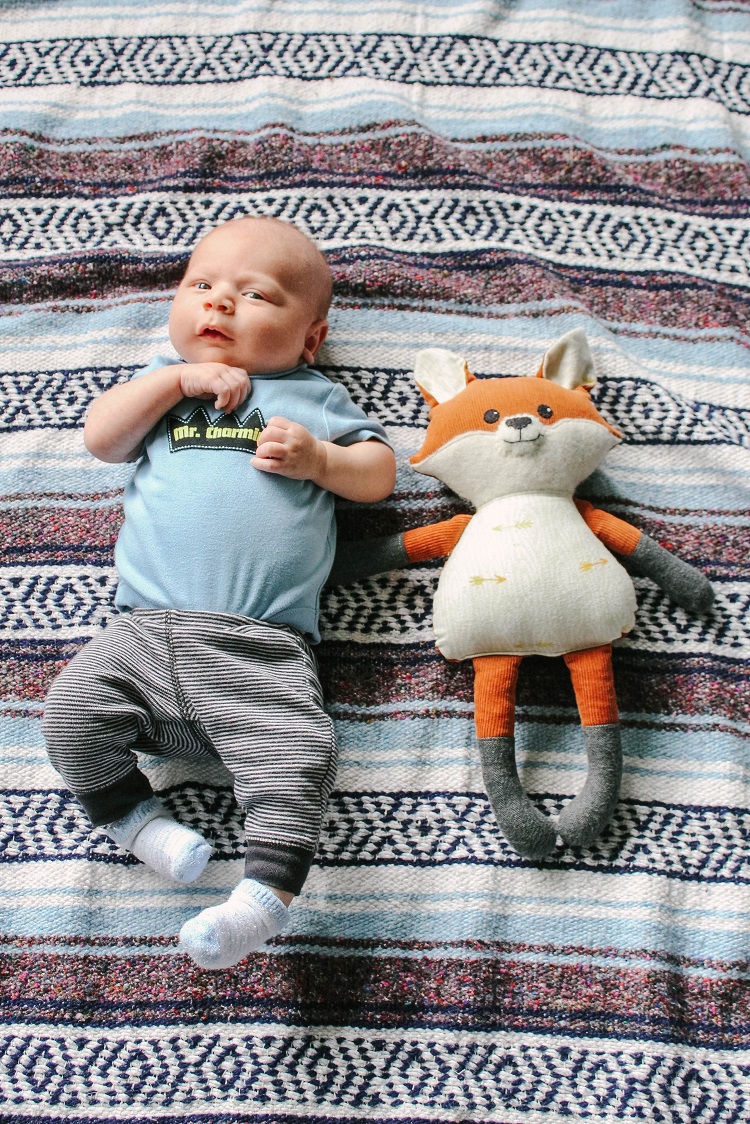 One Month at a Glance {Josiah} During Caleb’s first year of life I made sure to take a photo of him next to his little bear on his monthly birthday each and every month.  While I was doing it everyone told me it was such a first child thing to do and I promised to myself that every child that came after Caleb would get monthly photos as well.  Josiah is a month old and, so far, I’m succeeding at that promise.  I also have to say that in the past 2ish years my photo taking skills have grown by leaps and bounds!

At a month old, Josiah is doing pretty much exactly what a month old baby should be doing – eating, sleeping, and pooping.  That being said, when he is awake he is so strong!  He is able to hold his head up like a champ and has the strongest little grasp.  We’re thankful for our big guy!

Josiah is a great eater!  After a really hard first two weeks where nursing was really painful for me, my body got used to nursing again and it started being totally easy.  Josiah loves cluster feeding in the evening but, other than that, doesn’t take long at all to fill up his little belly.  I’m thankful I am blessed by an overabundant milk supply, although Josiah is still learning not to overeat and make himself throw up.  I know that we’ll continue figuring one another out and my body will regulate to provide just what my little man needs.

My little one simply adores me and I’m so thankful!  Josiah loves gazing at me and I’m the only person who can consistently calm him and get him to sleep – even without feeding him.  I know that someday Nate will be Josiah’s favorite – just like he’s Caleb’s favorite – so I’m soaking up the love now…  Even though I know it’s mostly because I’m the one with the boobs.  Josiah (or Jojo, as Caleb calls him) is Caleb’s favorite little buddy and adores giving him kisses, holding him, cuddling him, and laying all over him.  I would estimate that I say “Gentle, Caleb” or “Don’t touch the baby, Caleb” about 208347 times a day.  My boys are going to be great friends… As long as Josiah makes it that long.

I was SO scared of how I would handle having another difficult baby since all I knew was Caleb’s crazy baby-ness.  I’m so incredibly thankful to say that little Josiah is nothing like his big brother.  Josiah is so easy and go with the flow.  Of course he’s a normal baby who fusses and cries but the uncontrolable screaming that I dealt with throughout Caleb’s first year doesn’t happen with Josiah!  We haven’t had to get out the yoga ball to bounce him at all!

There’s not much communicating that happens with a one month old.  Obviously little man communicates with us by crying.  Thankfully it’s not too much crying with him.  All the praise hands!

Like his brother before him, this category already applies to little Josiah.  His life started out a little scary since he was born with weird, raspy breathing.  He didn’t start crying after he was born and, beacuse of that and his breathing, was taken away from me within the first minute to get his oxygen levels checked.  Thankfully he was getting the oxygen he needed and finally started crying so within abuot twenty minutes he was returned to my chest and I got to cuddle him.  During our stay at the hospital the pediatrician also let us know that Josiah’s legs and feet curled up in a concerning way.  She said that she didn’t think it was quite clubbed feet but that she wanted us to see a pediatric orthopedic surgeon.  Two weeks after birth I drove two hours north to Seattle to meet with the doctor only to have a fifteen minute appointment where he said everything was totally fine and that Josiah’s feet would straighten out all on their own.  I’m happy for that even though I wish I wouldn’t have had to drive four hours round trip to get that answer.

I am absolutely thrilled to be able to say that Josiah sleeps like a champ!!!  I was shocked the first time he fell asleep all on his own while laying in bed.  I knew hypothetically that that was something some babies could do but I had never experienced it with Caleb.  About half the time he needs to be gently bounced or rocked in order to fall asleep but nothing like the vigorous hours long yoga ball bouncing we had to do with Caleb.  Even better than all that, though, is that Josiah is a fantastic nighttime sleeper.  He typically only wakes up once a night (there have been two nights where he’s woken up twice) and sometimes he doesn’t wake up until I decide my boobs are about to explode and wake him up myself to eat.  I think he’d sleep through the night some nights but I haven’t given him the opportunity to do that yet since my body would hate me if I tried.  On a typical night Josiah sleeps from about 9pm to 8am – the perfect schedule for our household! Dear Josiah, I am so thankful that God knew exactly what sort of little guy I needed.  You are an absolute dream and I love loving on you!  I know life is so different for you than it was for Caleb during his first month of life and we’re not able to focus 100% attention on you but it’s fantastic to see you already being able to go with the flow.  I adore holding you during Caleb’s nap time, gazing into your grey eyes (we’re thinking they’re turning green?) and getting to spend some good one-on-one time with just you!  Sometimes I have a hard time believing that you’re my little one – especially since you look nothing like your brother (the fact that I’m watching Switched at Birth currently doesn’t help that disbelief at all…).  You are already your own individual and, although I know you and Caleb are going to be the best of friends, it’s going to be so fun to see who YOU become!  I love you with my whole heart and feel so fortunate God trusted me to be your mama!

Check out Caleb at one month!

Your Turn:
Did you do monthly photos with your kids?
How big was your baby at a month?