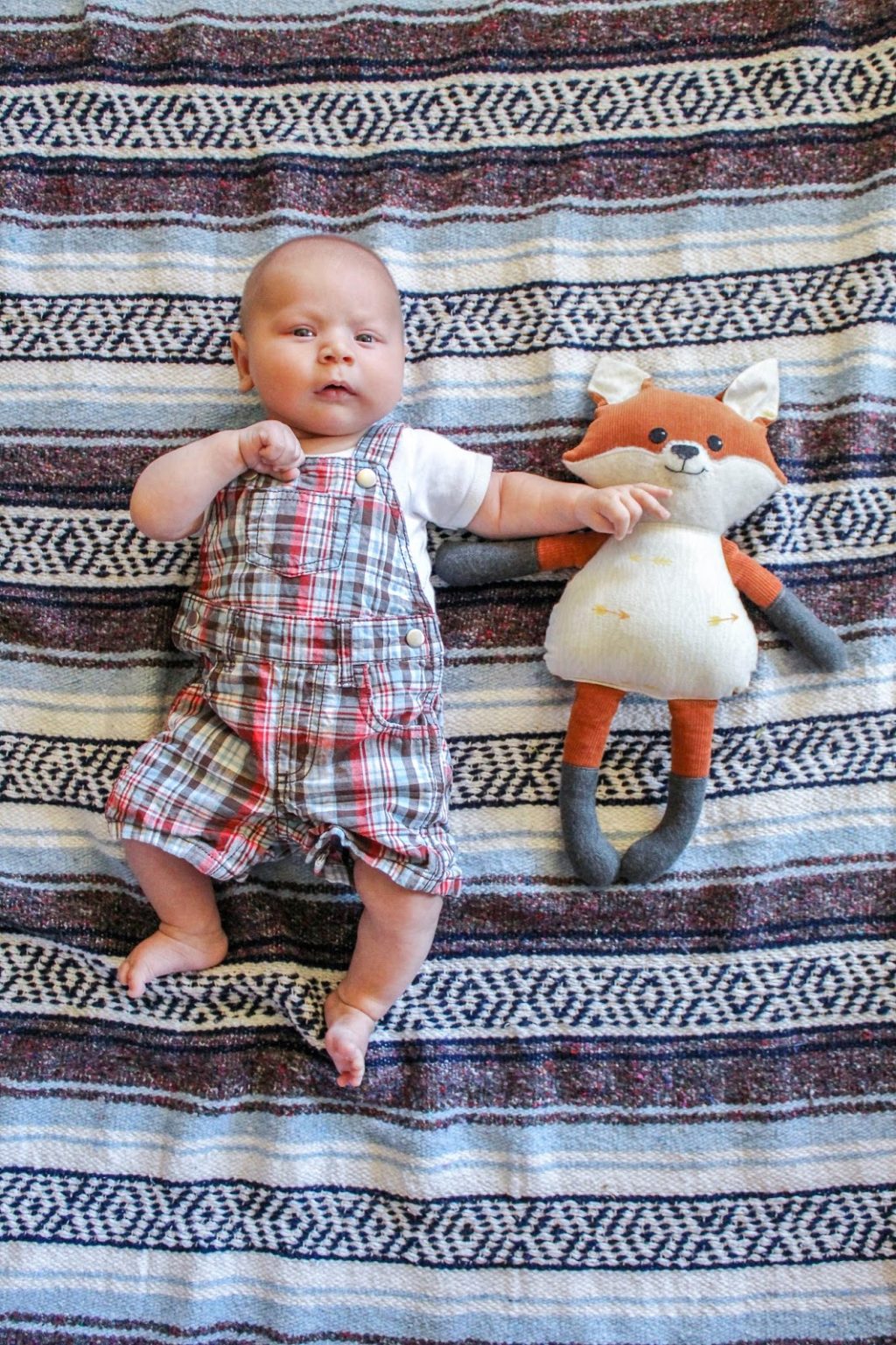 Two Months at a Glance {Josiah} My favorite milestone this month has been that Josiah has begun to smile!  It really is the most adorable thing and he smiles all the time!  Along with smiling he also has started to giggle and it fills out hearts with joy every time it happens.  This happy little dude is so different than his big brother was and I’m thankful that dairy is probably not going to be an issue for Josiah.

Josiah is still a fantastic eater.  He’s chunking up so much and getting so quick with his feeding sessions.  Thankfully Josiah has stopped cluster feeding in the evenings and freed me up to do other things – not having to sit on the couch all evening.  Have I mentioned that he’s so much easier than his big brother was?  Nights are hard because he’s such a great sleeper but my body still wants to produce a ton of milk so there are nights when I’ll go into his room to feed him before he wakes up in the middle of the night, just to relieve my pain.  I know eventually that will even out and I’m definitely not complaining about having a good sleeper.

As much as I don’t want to admit it, Josiah likes Nate and Caleb now, not just me.  I am definitely still his favorite person (or, really, he just loves my boobs…) but he grins and gets so happy when he sees his big brother or daddy.  Caleb is still all over his little brother – giving him kisses, hugs, and basically smothering him.  At his two month appointment, Josiah’s pediatrician asked me if Josiah had any stressers at home.  I asked if having an annoyingly loving big brother counted as a stresser.

Josiah is still the sweetest little one.  He is smiley and giggly and just loves his family.  I’m excited to see what that means for his personality as he continues to get older!

Obviously little man isn’t talking yet but it’s fun to remember how little ones like him communicate.  He doesn’t cry very much but his squeaks and head bobbing definitely let me know what he needs.  He is beginning to coo a lot and it’s fun to “talk” to him through coos.

Nothing to put in this category for the month!  Woot woot!  Maybe he won’t be as cray cray as his brother in this regard either.

I thought Josiah slept like a champ last month but amazingly he sleeps even better now!  At the beginning of the month we decided to put him in his own room for the night.  I didn’t want to do it as early as this but he is a NOISY sleeper!  All his squeaks, grunts, wiggles, and snorts were keeping me up at night and it wasn’t possible to keep it up.  Thankfully he’s doing great in his own room and it’s fun to watch him over the baby monitor.  He goes to bed at about 7:30 (unless we’re out of the house, then he’s ok with being up later if we’re keeping him distracted) and sleeps until about 7 with one nighttime feeding.  It’s the best.  I love that he’s not like his brother!
Josiah is also a pro napper!  I have been making sure to swaddle him up and put him in his crib during naps and that makes a huge difference than when I’m trying to have him sleep in the same room his brother and I are playing in.  Josiah typically takes three naps a day – one of them being around 4 hours and the other two being about two hours.  Yes, Josiah is only awake about four hours a day . It’s pretty crazy!  Thankfully Josiah can also nap pretty well on the go so we’re not stuck at home all but four hours a day but those naps don’t last for four hours at a time.

Dearest Jojo, this month has been so wonderful with you!  I love getting to know you more and more and learning who you are, what you like, and a little bit of who you’re going to be.  Your personality is so sweet and loving and I know you’re going to be the most precious little one growing up!  Your relationship with your big brother is already blossoming as he cuddles you, kisses you, lovingly mimics the way I coo and dote on you, and sit on you.  (That one we’re trying to convince him isn’t ok)  I pray for your little heart all the time – praying that you grow to know and love the Lord.  I know He has great things in store for you!

Check out Caleb at Two Months

Your Turn:
What sorts of things were your little ones doing at two months?
How adorable are baby smiles?