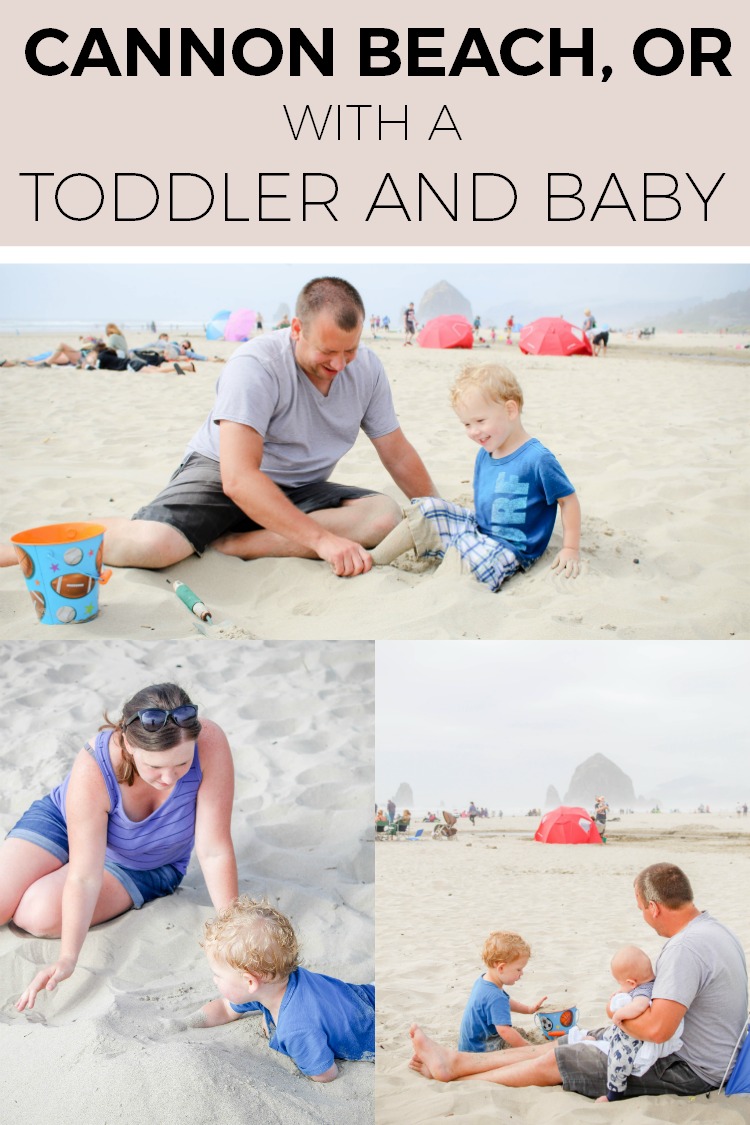 Cannon Beach, Oregon with a Toddler and Baby Nate and I love to travel!  We try our hardest to go on an adventure every summer and, now that our boys are in our lives, we want to start fueling their love of travel as well.  As much as we would have liked to have taken our boys on some glamorous vacation this year, it was not in the budget.  All the home renovations we’ve been doing have cut into our travel budget.  Even though we couldn’t afford to go far, we were craving adventure so we decided to pack our boys up and head down to Portland to stay with our friends and do day trips from there.  One of those day trips was to the Oregon Coast – specifically Cannon Beach – and, although we were a little intimated to try, we realized that’s it’s totally possible (and even fun!) to go to Cannon Beach with a toddler and baby.  No sense putting things off until they’re older!
Since we drove during nap time, we arrived at Cannon Beach for a late lunch.  Thankfully we missed the lunch crowd at Mo’s and enjoyed a tasty fish and chips lunch while Caleb gazed longingly out the window at the beach.
Once we were done with lunch we packed our stuff down to the beach, set up camp, and enjoyed the afternoon splashing around in the waves, being buried in the sand, and soaking in the (unusual) sunshine the coast had to offer that day!
Since this was our first beach trip with our kiddos we learned by trial what we should and shouldn’t have done!

Bring Your Own Shade

We were so thankful that we knew that it was supposed to be nice at Cannon Beach that day!  Usually the Oregon Coast is overcast and cold so a warm day is a pleasant surprise!  We packed a shade tent for the boys and we definitely used it, especially when Josiah needed his nap in the mid afternoon.  I think we’ll be bringing the tent with us on future beach trips even if it’s not supposed to be sunny because it’s still a great way to keep sand away from the little one and blocks the wind that is pretty common on the coast!

Set Up Camp at an Optimal Spot

If we had known better we would have done this one differently.  Caleb insisted that we plant ourselves down right away when we got to the sand and we agreed.  Unfortunately, that left us really far from the ocean and one of us always had to be camped out with our stuff while the other was running around with Caleb.  We would have picked a more optimal location if we had thought about it ahead of time!  We were thankful that Caleb wanted to dig in the sand, burying himself and us, and building sand mountains so we were able to spend all that time together as a family!

Let the Toddler Go at His or Her Own Pace

The ocean is a scary place – especially for little ones!  Caleb insisted that we didn’t put him in his swimsuit when we got down to the coast and, since it looked like he wasn’t going to try going in the water, we decided that was fine.  Gradually, though, Caleb got intrigued by the kids jumping waves and wanted to join them.  Before we knew it, Caleb was soaked from head to toe and covered in sand!  He ended up riding home in his swimsuit since that was what he had left that was dry!

Realize You Won’t Get the Pictures You Want

I love getting pictures of my boys – especially pictures of the first time they do something.  Once Caleb decided he wanted to go in the ocean I wished I could get pictures of him enjoying himself.  Unfortunately, either Nate or I had to be right with the little man (you know, making sure he doesn’t drown!) and the other one of us had to be with Josiah and our stuff.  I couldn’t take my camera down to the ocean since, when I was in the ocean, I was on Caleb duty.  It was definitely a good reminder to me to just be in the moment.  I got to experience Caleb’s first time splashing around in the ocean.  I got to teach him how to jump waves.  I got to show him how he sinks into the sand when the waves recede.  Someday I’ll get pictures of my boys playing in the waves but for now I’m ok with not capturing the images.

The most important thing is to enjoy your time at the beach!  Let your little one explore.  Let her check out tide pools and find seashells.  Let him chase the seagulls and bury you in sand.  The beach is a magical place for toddlers and it’s amazing to look at it with their eyes again and relive what it’s like to be a child. Your Turn:
Have you ever gone to the beach with a toddler and a baby?