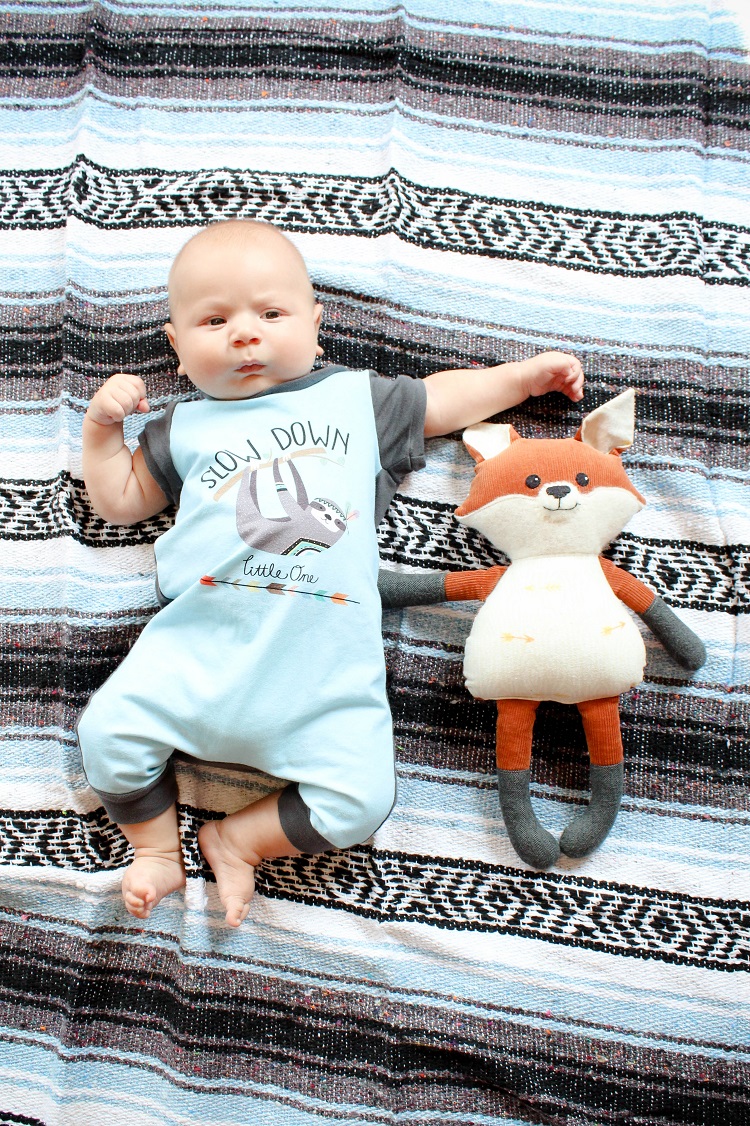 Three Months at a Glance {Josiah} Josiah rolled over once the day before he turned three months!  He’s been shimmying and laying on his side for quite a while but he finally got up the momentum to turn all the way from his back to his stomach.  Of course, he got his arm stuck under himself so he got so frustrated.  Josiah also still adores being in his ring sling!  I’m so thankful that he loves it because my friend’s son who’s the same age hates being in a carrier.  Running after a toddler is so much easier with a baby in the sling.

Eating is still going great with this little man.  He nurses like a champ about six or seven times a day and is growing like a weed.  Unlike Caleb, Josiah is super gassy and needs to be burped after each feeding.  I’m thankful that, even so, he rarely spits up when he burps.  I rarely need to have burp rags on hand because he typically holds everything down.

Josiah definitely is beginning to recognize people.  He grins and grins whenever Nate and I are around and gets very wary if Caleb is around – unless I’m holding him, at which time he’ll smile at his big brother too.  It makes sense since his brother tends to think loving means sitting on, rolling over, or any number of other torturous ways of “caring” for a baby.  Josiah is pretty good about being willing to go to other people but prefers me when he’s getting tired or, obviously, hungry.

Josiah is still the sweetest little man.  He’s getting a little more feisty when he’s not getting what he wants when he wants it (food) but that just comes with the territory of learning autonomy.  He lights up when Nate and I are around and loves looking out while being held to see the world around him.

Giggling has been happening more and more and it’s the sweetest way of communicating.  He also has started jabbering quite a bit and we love “talking” to him.  Caleb loves copying his little brother and will say “baby say… and then make whatever sound Josiah just made.”  He’ll also say “baby singin'” or “baby talkin'” depending on the situation.

All the praise hands that, once again, I don’t have anything to say in this category.  He’s less and less like his brother everyday.

Josiah is still sleeping so well and I’m not looking forward to the upcoming four month sleep regression!  (Knock on wood!)  Josiah typically wakes up for the day around eight and takes three naps – one of which is usually about four hours.  The long nap varies as to which nap it will be so it’s hard to make plans during the day but I’m not complaining one bit!  The little one typically goes down for the night around 7:30 or 8.  Basically he’s only awake four hours or so during the day!  It’s crazy but his doctor said it’s fine and he’s developing and growing at a normal rate.  It’s so awesome to have a kid that honestly has signs that he’s getting tired.  Josiah will yawn and vigorously rub his right eye and we know that it’s time he goes to bed.  We’ll swaddle him up, lay him down, and within a few minutes he’s out!  If only every kid were like this! My Little Jojo, How can you constantly be just the sweetest little guy out there?  I love it that you’re getting more and more alert and are engaging with us so much more.  It makes my heart happy when you grin at me and make it clear that you know who I am and that you feel safe with me.  I can see you learning and changing every day and, although I do miss your newborn stage, I love getting to know who you are going to be.  I pray every day that you will learn to love Jesus with your whole heart and will stay a sweet, easy going person!
Read More
One Month
Two Months
Check out Caleb at three months!
Your Turn:
Did you do monthly photos with your kids?
How sort of things was your little one doing at three months?