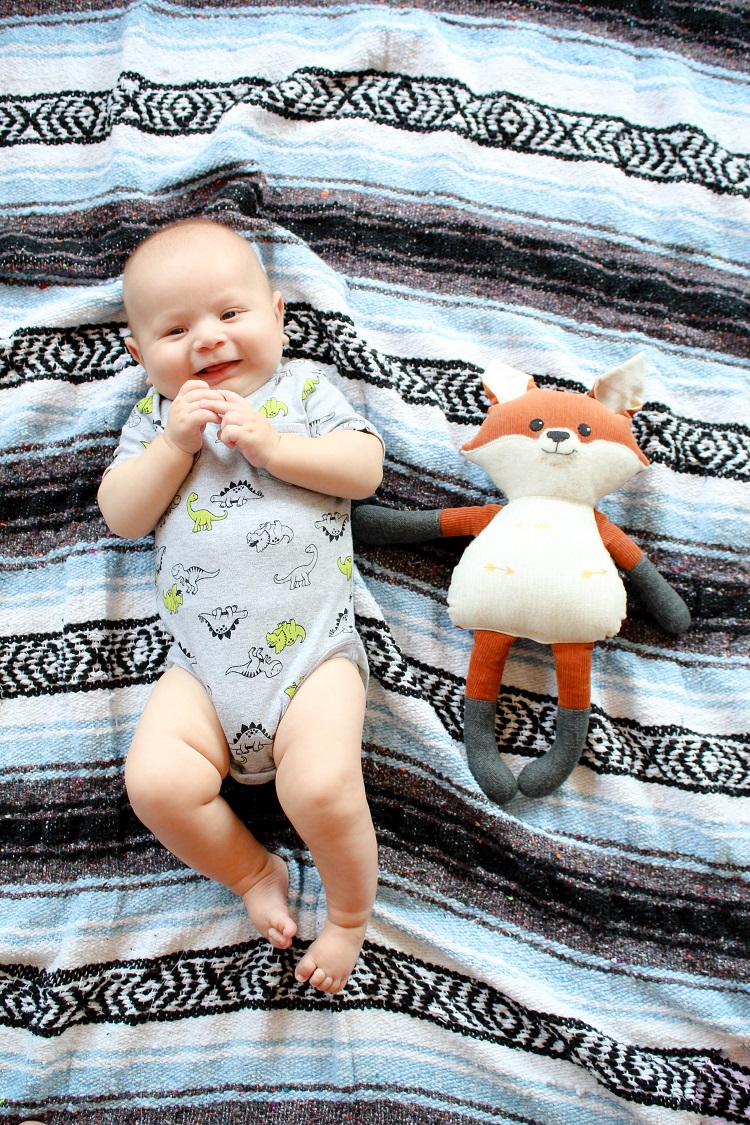 Four Months at a Glance {Josiah} This has been the most fun month to watch as my little guy is learning new things every day!  Like I said last month, Josiah rolled over the day before he turned three months from his back to his stomach.   Since then he rolls multiple times a day!  Nate and I say he does it because he’s trying to get away from his brother who loves him a little too much.  Most of the time he can’t get his bottom arm out from under him, though, so he gets frustrated a lot.  Every so often he gets his arm free and is so proud of himself as he lays on his belly.  He’s rolled from his belly to his back twice so far so basically my baby is awesome.
Josiah is also becoming much more aware of his surroundings.  He loves checking out his feet and his hands, trying to figure out what they do and how he can grab them.  He also loves his little play gym.  He’ll lay under it for such a long time, batting at the hanging toys and giggling away.  He’s just the sweetest little guy!

I’m pretty sure eating is never going to be an issue with Josiah.  He loves eating away and gets so sad if I don’t feed him pretty much right when he wakes up in the morning and from each nap.  He’s still nursing six or seven times a day and it’s perfect for both of us.  Josiah still won’t take a bottle (to be honest, we’ve only tried it once…) but he’s so easy going that it has never been an issue that he will only nurse.

Josiah is still a mama’s boy but is getting more and more ok with other people.  When he’s being held by others he likes being able to see me so he knows he’s safe.  Josiah’s starting to smile at more and more people and it’s the sweetest thing.

Little dude is the still the sweetest thing!  I didn’t know a baby could be so happy!  He grins all the time – especially at Nate and me – and giggles away whenever we are trying to be funny.  We’ll do pretty much anything to get him to giggle.  Still no belly laughs but we know they’re coming.  Josiah is still willing to go to people, is more ok with hanging out with Nate, but still favors me 100%.  Since his big brother has always preferred his daddy it’s nice to have a kid that loves me most.  (Don’t tell Nate or Caleb I said that…)

Nate sometimes says that he feels like Josiah is more mature than Caleb.  Caleb is such a goober and gets this high pitched, squeaky voice when he’s talking to his baby (pretty sure he got that from me…) and wants to kiss him, hug him, hold him, and help carry him.  Josiah just kind of looks at Caleb with a look that seems to be described as “Ok, bud, I’ll humor you this time.”  It’s the funniest thing!

Josiah babbles and “sings” all the time now!  It’s so sweet and it’s fun to have a baby who isn’t silent like Caleb was.  Maybe he won’t be a toddler who doesn’t talk…  Time will tell!

I can’t believe we’re at four months and I still don’t have anything to add to this section.  Apparently his brother was the only one who needed this section as a part of his monthly updates.

Well, the four month sleep regression came and went (knock on wood) and it wasn’t too bad!  For a few days Josiah had a hard time putting himself down for naps and for the night and was waking up two or three times a night (as opposed to one or two times a night).  I was gearing up for it to get worse and worse but, thankfully, about a week after it began, it ended.  There was one night where we were rocking him until about 12:30 and that felt like the worst for us but we also realize that it only felt that way because Josiah’s typically such a great sleeper.  The sleep regression was horrible to me while it was happening but ended up not being too bad.
We also discovered recently that we should not be putting Josiah down at 7:30 for bed time.  If we do, he wakes up around 2 or 3 and then again around 5 or 6 and then wakes up for the day around 9.  If we push him to stay awake until 8 he’ll wake up around 4 or 5 and then wake up for the day around 9.  Yeah, we can handle keeping him occupied for half an hour, even if he’s tired and grumpy.
Josiah is still taking three naps – a three hour one and two one and a half-ish hour naps so he still sleeps the majority of the day.  Sometimes it’s hard that he’s always asleep since I want to get out of the house but I’ve found that if I make sure he gets at least his middle nap at home (which is convenient since that one usually coincides with Caleb’s nap) he’ll sleep in the ergo or in his carseat for the other two naps.  I love second babies. Dearest Jojo, Thank you so much for being the sweetest, most precious little baby boy!  It’s so fun to see you grinning and giggling about everything and just happy about life.  Your big brother loves you too and spends far too many of his waking moments asking about you, loving on you, “playing” with you, and, unfortunately, tormenting you a little too.  At least it’s all out of love.  You two are going to be the best of friends as you grow up – if he doesn’t scar you for life first.  It’s so wonderful watching your sweet, gentle spirit come out more and more each day.  You definitely take after your daddy in personality, not just looks!  I love you, baby boy!
Read More
One Month
Two Months
Three Months
Check out Caleb at four months!
Your Turn:
How sort of things was your little one doing at four months?