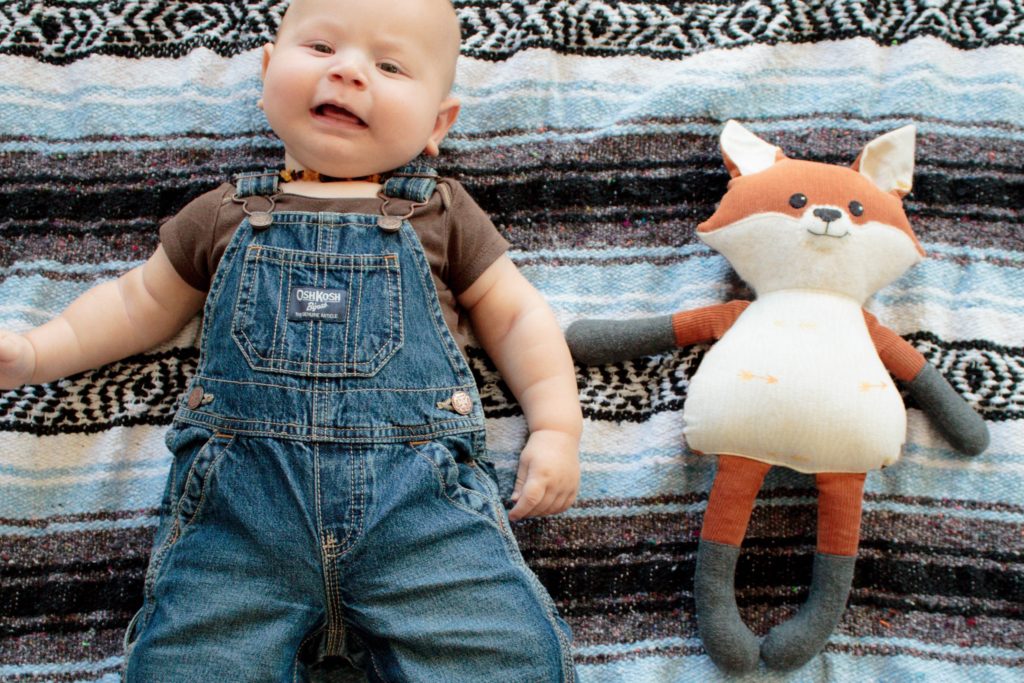 Five Months at a Glance {Josiah} 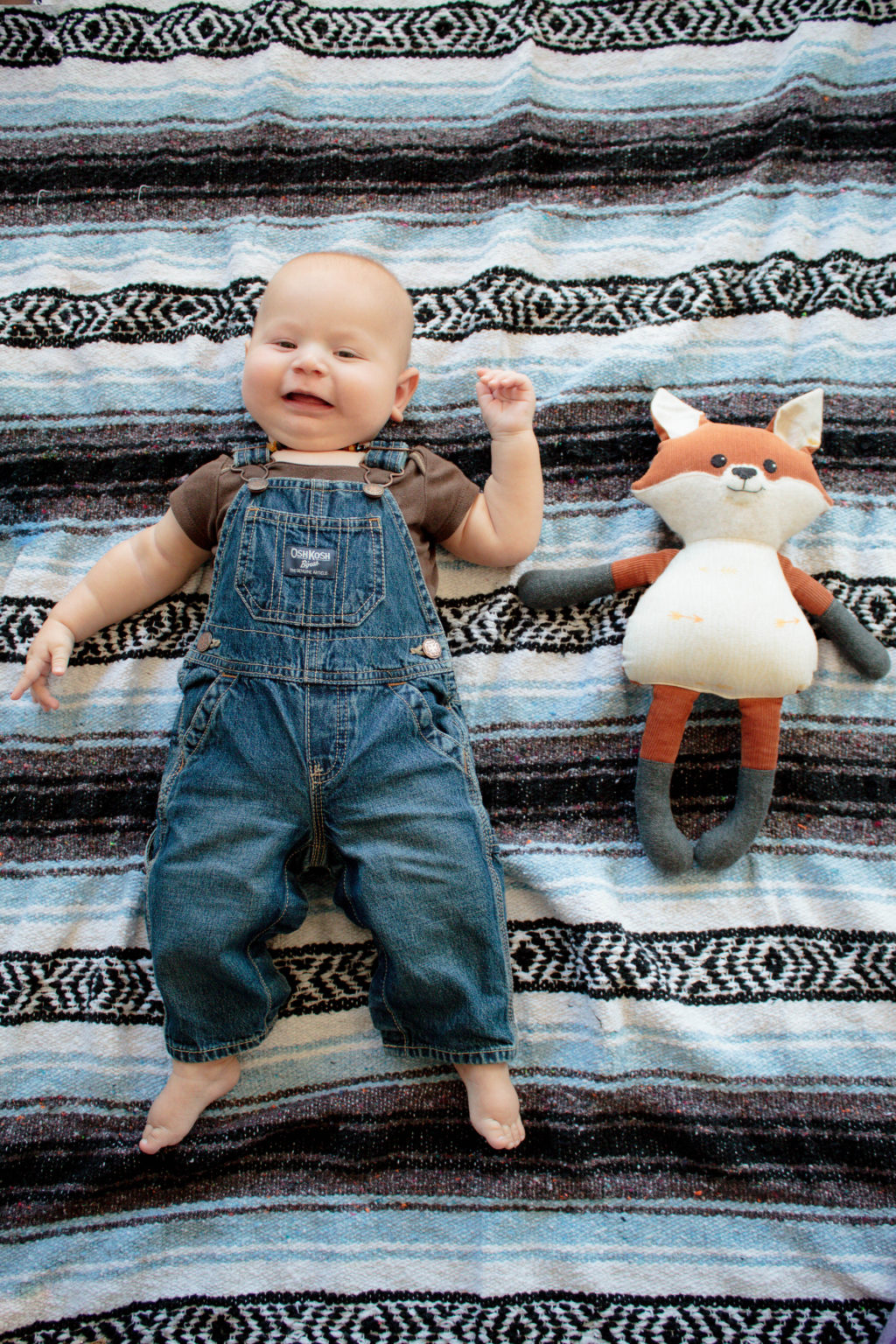 Josiah is such a sweet, lovable little guy and, once again, it’s been amazing to watch him grow and change in the past month.  He’s still rolling like a champ from him back to his front but hates going the other way.  He gets so frustrated when he wants to roll back over and doesn’t even try to roll from front to back.  Although he’s done it a few times, he’s kind of a lazy little kiddo and definitely needs to figure his life out.

In the past month, Josiah cut two teeth!  He handled it well with just a little bit of the normal teething angst.  Now that he has teeth Caleb thinks he should be able to eat everything…  And we’ve had to convince him that the baby still is too young to eat.  Josiah chews on EVERYTHING and is going to be so excited when we start introducing food to him next month!

We did our best to introduce a bottle to little Jojo this month…  It didn’t go over as well as we had hoped.  Nate tried a few times with both pumped milk and formula and Josiah wasn’t having either of them.  Finally I tried and he took a bottle of both formula and pumped milk.  I was so excited because I had an event coming up that I wanted to be able to go to without him!  Unfortunately, I went to a baby shower and left a bottle of milk I had pumped two days prior with Nate to give Josiah.  Josiah wouldn’t take it and screamed bloody murder.  The next day I tried to give him the other half of the bottle of milk and he screamed again.  I tasted the milk and it was SOUR!  I don’t know what happened in our fridge to make it go sour but I didn’t blame my little man for not wanting it.  This whole sour milk fiasco made Josiah refuse any bottle we tried to give him after that.  We gave him a break and we’ll see if he’ll try a bottle again in the future.  (The good-ish news is that the event I wanted to go to without him was cancelled so it’s not as big of a deal that he won’t take a bottle)

Josiah is noticing people more and more and he loves smiling and giggling with anyone he sees.  He’s such a sweet little boy.  Jojo is finally starting to like his big brother and it makes me happy!  For the longest time he was a little scared of his rough and tumble big brother but their best friendship is finally blossoming!  I’m thankful that I’m still his favorite person.  I missed out on that with Caleb – he’s a daddy’s boy through and through – so it’s nice to be someone’s favorite.

I love that I can keep saying that Jojo is the sweetest little baby.  It’s interesting to compare him to Caleb at the same age, though, because it’s becoming so clear that Caleb always thought in a different, fascinating way, even when he was a baby.  At five months, Caleb was playing little games, giving kisses, and doing a few other things like that.  Josiah, on the other hand, is more stable and grounded but is kind of boring while being relaxed.  It’s going to be so interesting to see how my creative thinking first born and my easy going second born relate to one another and the world as they grow up!

Josiah is responding more and more to us talking to him.  He definitely knows his daddy, mama, and big brother’s voices and love it when we’re around!  He still babbles a ton and “chats” with us in his little baby babble way.

At Josiah’s four month doctor appointment I brought up the fact that Josiah hated holding himself up on both legs.  Whenever we tried to get him to stand, his left leg would give out and he’d go limp.  Nate and I mostly chalked it up to laziness but I didn’t want to be a negligent mom so I figured his doctor should know.  She also thought it was strange but said it could easily be laziness and we’d keep an eye on it.  Crazily enough, in the next few days Josiah started holding himself up with both legs.  *Eye Roll*  Apparently I just need to tattle on him to the doctor and he’ll change.  (PS.  At the same doctor appointment, Caleb told me he was going to be a doctor when he was big.  I’m holding him to it)

With getting his teeth, sleep has been a little more hit and miss for my little man.  I’m happy to say that his “bad” days are still better than Caleb’s good days had been at this age.  Josiah’s still sleeping three naps a day and typically wakes up twice a night.  There are nights that he really wants to wake up every few hours to nurse but we’re not giving into that!  He gets to eat twice a night and if he wakes up before one-ish, Nate goes in to rock him back to sleep.  It’s been working for the most part although some nights he’ll fuss for an hour or so because he just wants to comfort nurse.

We’re talking through what we’re going to do about sleep training for our kiddo.  I don’t think he’s ready to go the whole night without eating so we’re not letting him fuss in his bed for too long yet.  We also have decided that we’re ok with still rocking him mostly to sleep for naps even though it’s totally a sleep crutch.  On an average week Josiah naps while I’m wearing him at least five times and we don’t want his ability to nap on the go to end. 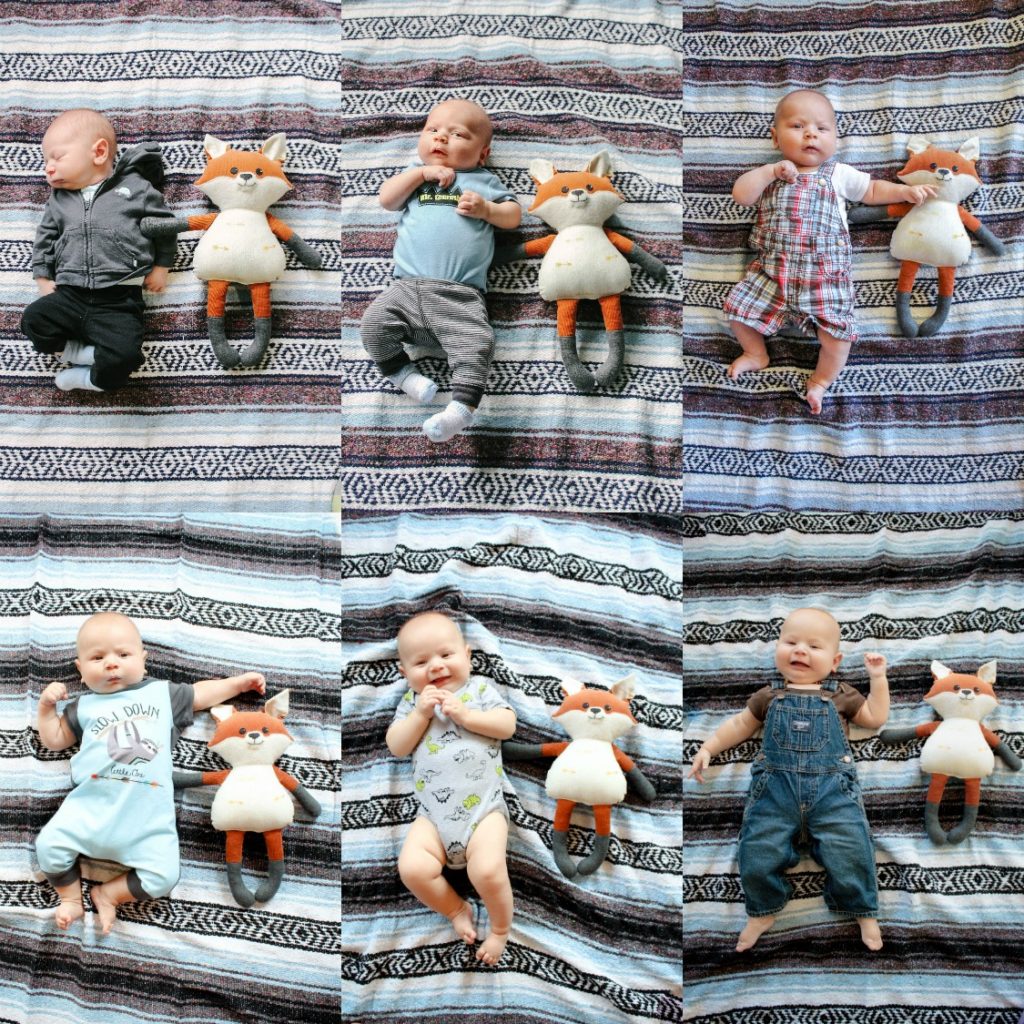 You are amazing, son!  I realize that you’ve only been a part of our lives for five months now but it feels like you’ve been around forever!  You were the little person we needed to add to our family to make us just that much better!  Your daddy, brother, and I all adore you.  Your smile and giggle brings joy to our hearts and we love knowing that you are a content, precious child.  We know that your sweet personality will be used by the Lord in amazing ways!

Check out Caleb at Five Months!

Your Turn:
What was your little one up to at five months?