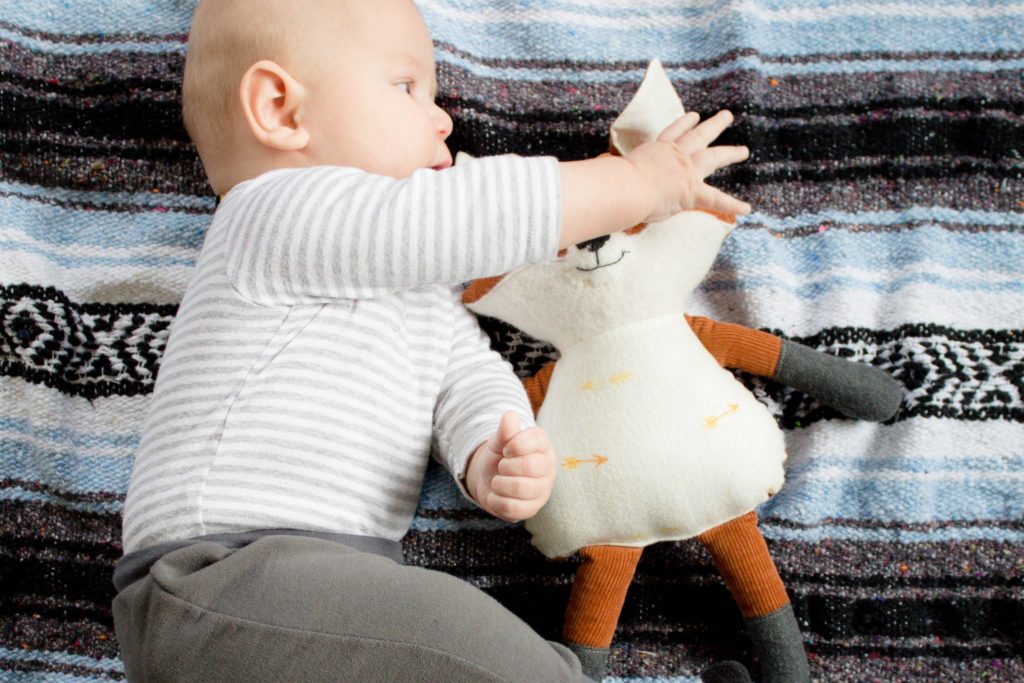 Six Months at a Glance {Josiah} All of a sudden little Josiah is mobile!  He’s not crawling yet (although he REALLY wants to be army crawling!) but he roles everywhere he wants to go.  He wants to get into everything and, of course, everything needs to go in his mouth.  I actually have to make sure Caleb’s hot wheel cars are put away and the rug is vacuumed because I’d rather my baby boy not choke on anything.

This month Josiah cut another two teeth.  Like his big brother, Josiah skipped over getting his two front teeth and got the two on either side of where the front teeth should be.  It makes me happy that I’m gonna have another little hillbilly smile on my hands!  Teething has been rough this time around.  Josiah is so grumpy the days leading up to cutting a new tooth and it breaks my heart a little bit!

When Josiah is not teething and grumpy he’s still such a precious little boy.  He completely and totally favors me over anyone else in the world (glad he didn’t take after Caleb in the daddy only club) and it’s so fun to see his face light up whenever he sees me.  He still adores being worn and loves being close to me.  Although I’m his favorite, he also really, really loves his daddy and big brother.  Our family motto is “Kelloggs are Best Friends” and I’m glad to see that it’s already coming true!

Josiah has been reaching for food like no one’s business while the family is eating.  His doctor recommends waiting until six months to begin food (and we do baby led weaning so we have to wait to do that until he’s sitting up better) so we’re still not giving him anything to munch on.  He’s going to be a big fan of food when he’s finally old enough!  That being said, he’s still nursing like a champ and refuses a bottle.  Such is life.

I’m a fan of my happy and smiley little man!  He’s still so sweet tempered…  Unless he’s tired.  Then he’s a demon child.  I still love him…  But really, he needs to get his life together.  We’ve put Josiah in the church nursery a few times this past month when the stars align properly (aka: he’s napped and eaten right before heading to church).  Most of those times have been while Nate and I help out with the youth group Wednesday nights and, after about an hour, one of the helpers comes and gets me to pick up my screaming baby.  Little dude is DRAMATIC!  He goes from zero to 100 in no time at all!  Someday he’ll stay in the nursery for the whole time…  Maybe…

Josiah is really coming into his own personality.  I’ve realize how kissy of a family we are now that he has started giving kisses.  It’s the sweetest thing and he adores kissing (read: licking or biting) our cheeks, lips, or noses.  Caleb LOVES that his brother gives him kisses now.  Josiah laughs so easily and loves being rough and tumble…  Which is good since he has Caleb as a big brother.

On the flip side, we’re finding that Josiah is a very sensitive child.  He cries so hard when he’s startled, hates being left out of things, and doesn’t love loud/chaotic situations.  It will be interesting to see how this changes the way we parent since Caleb isn’t like that at all.  It’s fun seeing the differences and similarities in our boys already.

Josiah chatters away all the time and it’s the cutest thing!  Caleb loves translating what his baby is saying and, surprisingly, most of the time Josiah is talking about choo-choo trains…  Crazy that he apparently loves trains as much as his big brother does.

This month involved a pretty not fun doctor appointment to draw some blood for some genetic medical testing.  I’m not going to go into too much detail because I want to respect my kiddos’ medical privacy but it was heartbreaking to have to hold my little boy down as they drew blood.  He was not a happy camper and I wished so much that I didn’t have to do it but we got through it and I’m sure he doesn’t even remember it happening.

I don’t want to talk about sleep.  Mainly because we’re not getting any anymore.  It’s the worst.

All of a sudden my great sleeper decided he didn’t know how to put himself to sleep anymore and needed to be rocked to sleep for every nap and bedtime (better than the hour+ bouncing on the yoga ball we had to do for Caleb).  Naps are hit or miss for him now.  He either sleeps for about 30 minutes or 3 hours.  There’s pretty much no in between.  Some days he’ll take two great naps and some days he’ll take five horrible naps.  It’s stressful and frustrating.

We’ve tried a few different sleep training methods and, so far, nothing has worked.  I’ll be talking to his doctor at his six month appointment but if anyone has any sleep training tips we’re happy to hear them!  We all need sleep! Check out Caleb at Six Months!

Your Turn:
What was your little one up to at six months?