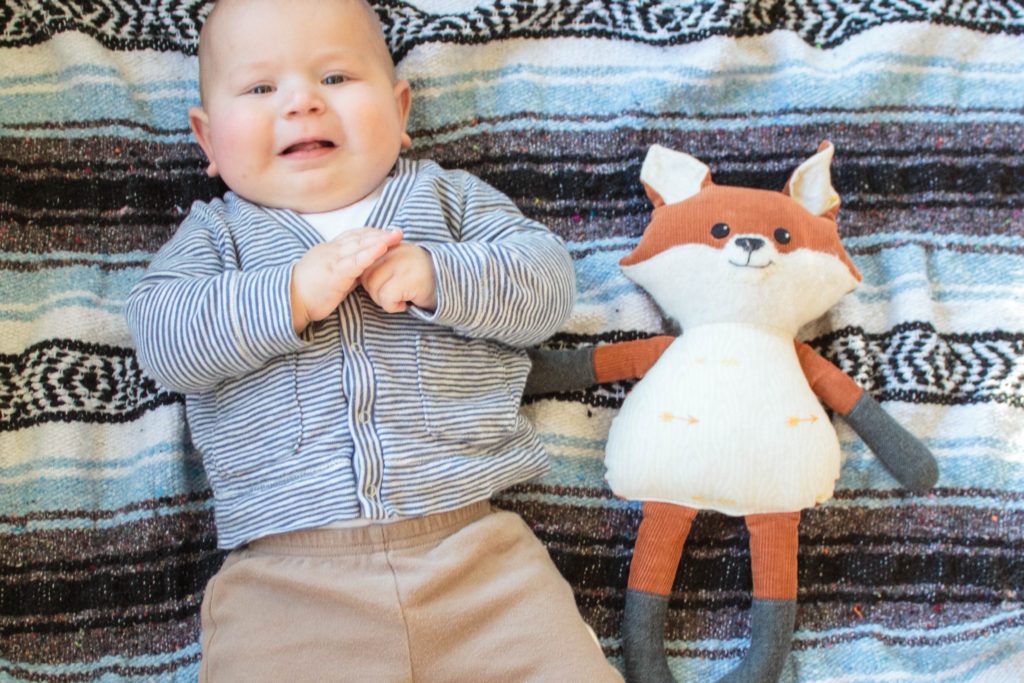 Seven Months at a Glance {Josiah} This month has been full of new activities for little Josiah – one of which is sitting up!  He’s become quite the pro at sitting in an upright position.  Of course, he can’t get himself into the position on his own but, once he’s there, he stays there forever and ever!  He loves sitting up and being a part of things more and more.  Kiddo definitely loves being a part of the family!

Beyond sitting up, Josiah also rolls all over the place!  I look away for one minute and he’ll be across the room.  This adds to the amount of cleaning I have to do since I have to ensure there’s nothing edible on the ground.  Surprisingly, Josiah has not gotten into the Christmas tree at all!  Two of Josiah’s favorite things to eat are paper and game pieces so Caleb’s new rule is that he can only play his games and do his puzzles on the coffee table.  A few of the directions in a few games have chunks bit out of them and Caleb is certain Josiah ate two puzzle pieces that are missing.  (I’m certain Caleb needs to be more careful with putting his puzzles away so he doesn’t lose his puzzle pieces but, you know, he’s probably right that Josiah ate them.  😉 )

One more tooth (thankfully one of his two front teeth) has broken threw and he looks pretty silly with five teeth – especially since he has a gap where the other front tooth is supposed to be.  It’s an adorable silly, though.  Unfortunately, Josiah has started grinding his teeth together and it drives Nate and me crazy!  We had forgotten that Caleb did this when he first got his teeth in too and we can’t wait for this stage to end!

On Josiah’s six month birthday we introduced food to him.  Kid LOVES to eat!  We started by letting him try out some avocados.  Every time he tries a new food he makes the funniest faces as he gets used to the flavor.  He certainly is dramatic.  When Caleb started eating food we ended up going solely baby led weaning since he refused to let us feed him and even more refused purees.  We figured we’d go the same route with Josiah but, shocker, they are once again completely different children.  Josiah LOVES being fed and adores purees.  While we’re sitting at the table for family dinner he does like feeding himself baby led weaning style but he wants to be fed at least once a day!  Craziness!  We try to go with the flow with our kiddos so we’re doing a baby led weaning/puree combo with this kiddo, I guess.

Unfortunately my little man is becoming a little less sweet natured.  Now that he’s able to express his feelings a little more than he used to be, he makes sure to express them.  One of his feelings is that he never wants his mama out of his sight.  Ever.  It’s really precious to be his favorite person but it also gets old.  Since we want to do our best to stretch our little man and get him to be ok with being with other people we have been putting him in the church nursery.  He makes it all the way through a service about two out of three weeks and the other week I have to go get my screaming child (who, of course, is just fine as soon as he gets in my arms).  We also make sure Nate spends one on one time with Josiah and he does loves his daddy… As long as I’m not nearby.

When I’m around, Josiah is such a happy, fun loving little boy.  He loves to giggle – especially at his big brother who he really adores more and more each day.  I’m so thankful they’re becoming such sweet friends.  Caleb is constantly asking about his brother and Josiah grins when he sees Caleb!  So sweet!

Josiah is also showing us that we have another musical kiddo on our hands.  He loves “singing” along with music and adores it when we dance with him.  Someday you’re all going to hear about the Kellogg family singers.  Be prepared.

Our chunky monkey is so good at expressing what he wants.  Of course, like most babies, he’s great at screaming bloody murder if he’s unhappy about something but he also has more subtle ways of communicating.  It’s hard to express in words but he moves his body around to show what he does and doesn’t want and it really is so cool to see him communicating in that way.  Of course, often it’s just that he’s leaning toward me to get me to hold him…  But even then, he’s communicating.

Once again, I’m happy to report that Josiah is not as accident prone/prone to get sick as his brother.  We did hear back from the genetic testing he had done and, praise the Lord, the tests came back negative!

Don’t get me started on sleep.  I can’t believe this is the kid who was a perfect sleeper for months.  Thanksgiving weekend we left Caleb with his grandparents so we could focus on sleep training Josiah.  Well, the sleep training didn’t happen.  Little man will SCREAM and SCREAM and SCREAM until we are willing to rock him to sleep.  It was so hard knowing what amount of cry it out is ok and what amount is too much but, eventually, we scaled back and only worked on him putting himself to sleep at bedtime.  Thankfully we’re doing good with that but he still wakes up at least twice a night and often will stay awake for an hour or more after his second wake up at around 4:30.  It’s exhausting.  Once again, Josiah is proving to be very different from his big brother.  It took Caleb all of three days to learn to put himself to sleep for bed and naps and then two nights to learn how to sleep through the night.  If anyone has any great tips for sleep I would LOVE to hear them!  We’re pretty much willing to try anything at this point…  Within reason, of course.

Dearest Josiah,
We had this talk last month but I’m serious, you need to sleep!!!  Your parents can’t keep doing these all nighters.  Even with your sleep problems, we are so thankful that you are a happy, healthy boy and love you to pieces!  Your smiles, laugh, and joy light up our lives and we just know you’re the perfect addition to our family!  You sweet, sensitive spirit is so special to me and I love that the Lord entrusted you to me to nurture and love on!  I love you, precious boy!

Check out Caleb at Seven Months!

Your Turn:
What was your little one up to at seven months?