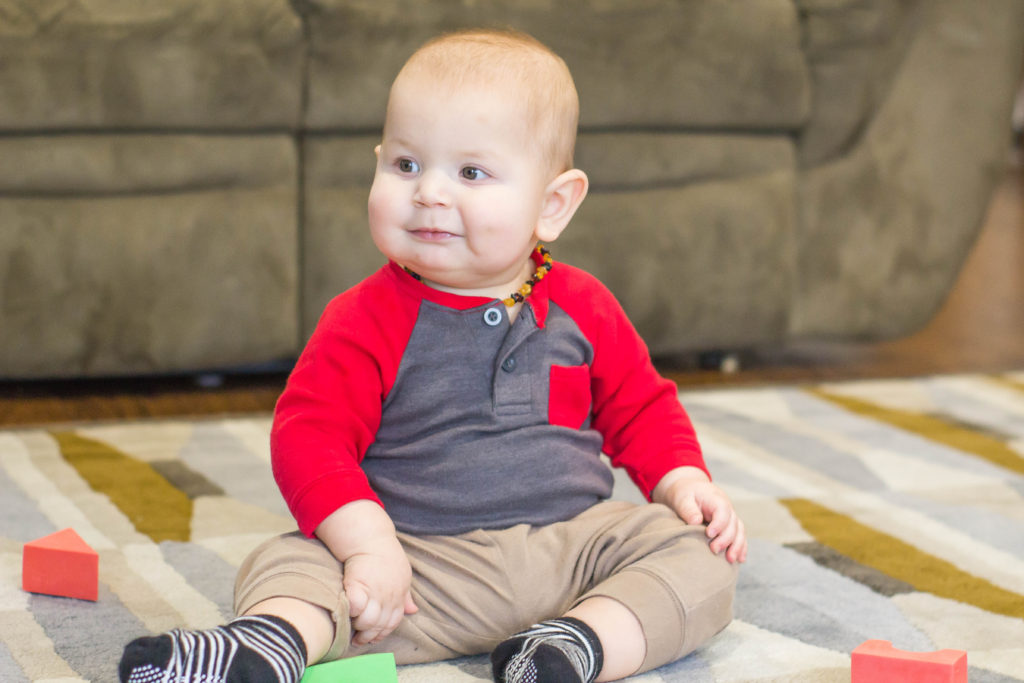 Eight Months at a Glance {Josiah} 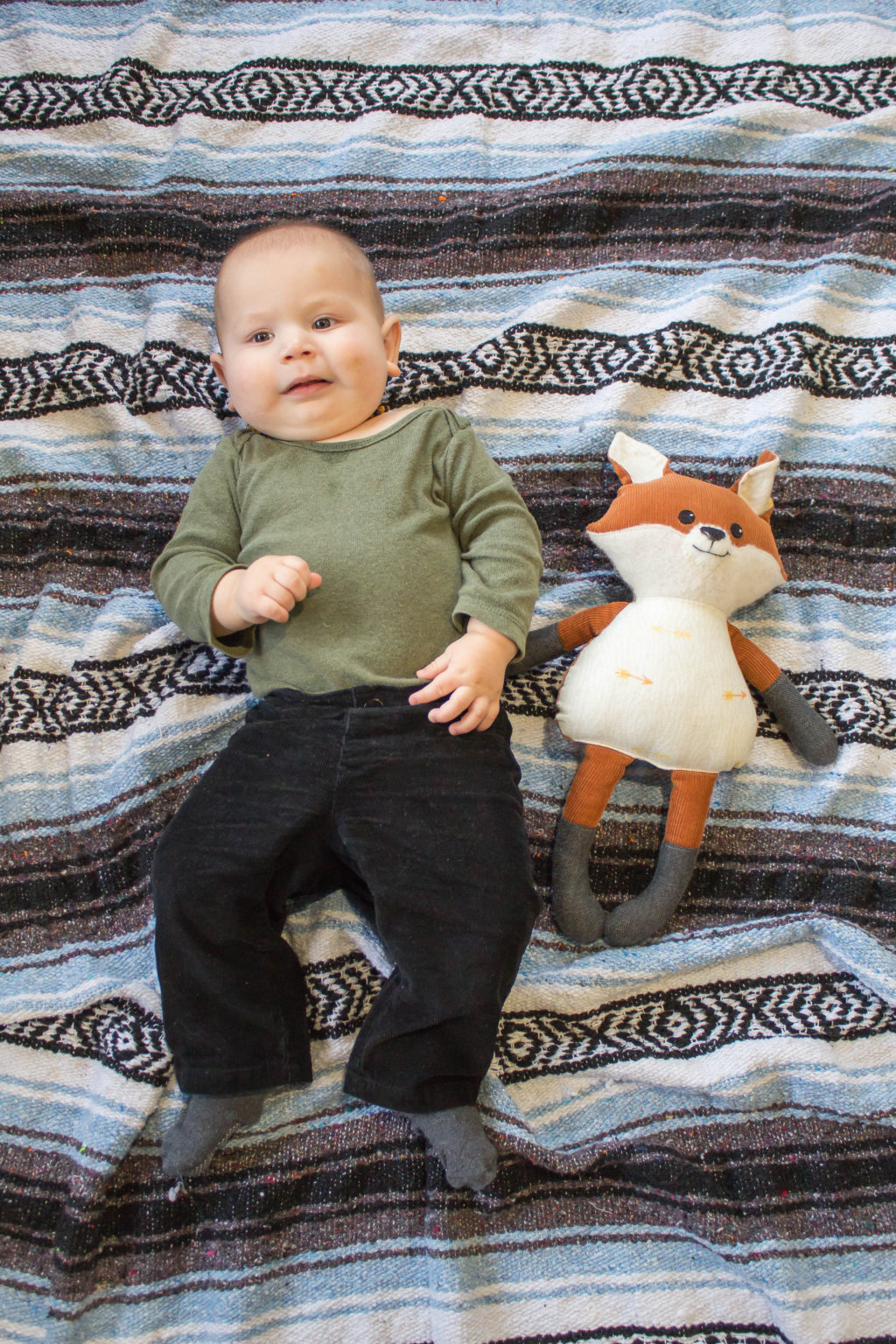 This month has brought about quite a few milestones for Josiah.  First and foremost, as of a few days ago, we officially have a crawler!  At the beginning of the month the little dude began army crawling and then not to long later, Josiah figured out how to sit up on his own.  We knew that from there it wouldn’t be long until he was crawling and we were right! Of course, our little dude has been lazy since day one so he prefers to army crawl still but, a few times a day, he’ll get up on all fours and crawl his little heart out!

Since Josiah is such a chunky little guy (Caleb makes sure we call him a BIG baby, not a little baby!) and he’s so good at sitting up, we decided that it was time for him to start taking baths in the big tub with his brother.  He loves it!!!!  Little man has always loved bath time and now that he can crawl around in the water he loves it even more.  He sticks his head face down into the water and pulls it up giggling away.  Absolutely no fear of the water in his heart!  Caleb loves being able to take baths with “his baby” and is careful (for the most part) to not do too much splashing.

This age is so much fun to me!  Josiah is starting to respond to us – claps when we clap, copies some facial movements, mimics sounds we say, etc.  He also has started dancing!  It’s the cutest thing and only happens with some songs.  He gets a huge grin on his face and starts bouncing away.  He’s definitely a Kellogg since he loves music!

Two more teeth have broken through with three trying to come in.  Eight months and he already has seven teeth!  His smile is precious with all his teeth!!!

If I didn’t know for sure that my boys were brothers I wouldn’t guess that they were at all!  They are completely different little people.  We’ve been giving Josiah real food for about two months now and his desires are opposite of what Caleb wanted.  All Josiah wants is to be fed pureed baby food.  We loved doing baby led weaning with Caleb and were planning on doing it with Josiah too but he just doesn’t want to.  Josiah will kind of eat food if we put it in front of him but his gag reflex is horrible and he just doesn’t try very hard to munch the food.  #LazyBaby  The only exception to this is crackers and cereal.  He’ll munch on those all day, every day.  Because carbs.

Josiah also has figured out that he loves stealing Caleb’s sippy cups and drinking out of them.  At first I didn’t love it but then I realized that meant that we could put formula or pumped milk in a sippy cup and Nate and I could actually go on a date without our boy!  (My children hate bottles)  We’re going to try that soon so hopefully next monthly update will include that!  Cross your fingers for us!  <3

Josiah is becoming such a little love bug!  He’s always loved me to pieces but now it’s totally evident that he adores his daddy and big brother too.  His face just lights up whenever any of us enter the room he’s in and he loves snuggling, giving and receiving kisses, and even likes it when Caleb tackles him!  He is also starting to recognize extended family and gave his grandparents all the kisses at Christmastime.  It’s fun to see him understanding who his family is!

This month Jojo is really getting the hang of going to the nursery during church and I *might* start putting him in the nursery at MOPS soon too (that one is a longer time frame and gets into nap time so I’m putting it off a little bit more).  The women who work in the nursery just adore him and always tell me what a little sweet heart he is.  We’ll be moving Caleb up to the three and four year old classroom at church in the next few weeks since he’s finally getting the hang of not pooping in his undies at church and, since the volunteers are so sad they won’t have him in class anymore, they’re thrilled that Josiah will be with them for a few years!

It’s so fun to see Josiah starting to engage with other little kiddos.  He ADORES babies who are littler than him.  He has a little ten week old cousin that we saw a bit ago and slathered kisses all over her.  He does that with our friends’ babies too!  So far he doesn’t care too much for the kiddos right at his own age (four of my friends had babies within the month before and the month after Josiah was born) but I’m sure that’s coming.

After a month of being a little more of a stinker, Josiah’s getting back to his sweet, easygoing self.  He smiles and giggles easily and he’s actually happy in the morning (that’s something we haven’t experienced before!)!  Josiah is getting very empathetic and cries when he hears Caleb crying (which is a lot right now #threenager).

Although Josiah’s still not talking or signing or anything (obviously), it’s very clear that he’s understanding more and more of what we say everyday.  He is learning what “no” means – especially since we’re using it more and more as he’s getting himself around more and more.  He definitely lets us know what he wants, though.  He pushes and pulls our hands, legs, body parts, etc and expresses himself well.  He grunts and sings more and more and his cute little voice makes us so happy!  He’s also getting this throaty, guttural cry that is crazy obnoxious but definitely lets us know what he’s thinking and feeling!

Unfortunately, with beginning to scoot and crawl comes a kiddo that has to be watched like a hawk.  Before Christmas, Nate got the flu for a few days.  I wasn’t feeling great either and it was just a rough time in the Kellogg household.  On one of the days Nate stayed home from work, I made him a cup of tea and put it on the floor next to where he was sitting on the couch.  It crossed my mind as I set it down that I should have reminded him that Josiah was scooting now but I didn’t.  Nate was too out of it to pay attention to where Jojo was and, sure enough, after I went back in the kitchen to try to catch up on dishes, I heard the baby start screaming.  I ran into the living room to see Nate scooping Josiah up and ripping his clothes off of him.  He had scooted over and stuck his hand in the fresh, scalding hot tea and then pulled the cup onto himself.  He ended up with a first degree burn on his hand and wrist and a second degree burn on his stomach.  We’re incredibly thankful that it wasn’t any worse.

Just a few days later, Josiah came down with the same flu his daddy had.  He had a low grade fever for a few days before Christmas and on Christmas day.  Thankfully on Christmas his fever broke and he was back to his happy normal self.

Since all bad things come in threes, just a few days ago Josiah was crawling across the living room floor, slipped, and landed on his face.  He bit his lip open and it bled everywhere!  Thankfully it actually wasn’t that bad of a cut and he just had a swollen lip for a few days but it was a little traumatizing to him!  I have a kind of irrational fear that one of my boys will get a tooth knocked out and I was just glad that didn’t happen with this injury.

I’m still not a fan of talking about sleep.  Thankfully Josiah has become really good at putting himself to sleep for naps and at bedtime but he still wakes up quite a bit at night.  When Josiah had the flu he was waking up every hour or so and that was MISERABLE! The few days after he had the flu we were so happy because he was sleeping from about 8-8 and waking up once!  Unfortunately, that was while we were at Nate’s parent’s house for Christmas and, as soon as we got back home, he was back to waking up twice a night.  At least it’s much more rare for him to want to play during the night and, when he does, he’s happy to play by himself in his crib and then putting himself to sleep instead of wanting one of us to be up with him playing.

Most days Josiah takes three naps but, if they’re good naps, some days he only takes two and I think it won’t be long until he’s officially down to just two a day.  The bad part is that when he only takes two naps they don’t line up with Caleb’s nap and mama doesn’t get her me time in.

My precious Jojo,
This month was a little crazy with your injuries and sickness. I’m so thankful that you were ok through it all  and that you’re such a sweet, good natured little boy!  God was absolutely watching over you through it all.  I’m so happy you’re back to being your giggly, gentle spirited self.  It does my mama heart good to see your personality unfolding in front of me.  I know your gentle spirit is going to be such a value as you grow up and I want to foster it as best I can.  I love you so much and am thankful for you!  You are the perfect little one for our family!

Check out Caleb at Eight Months!

Your Turn:
What was your little one up to at eight months?