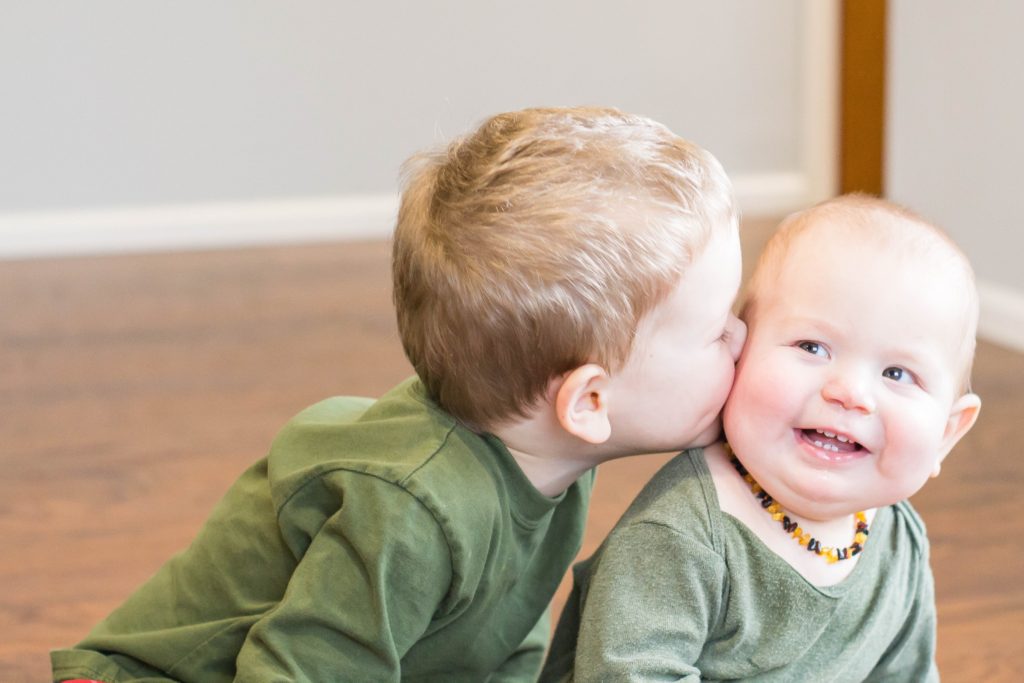 Nine Months at a Glance {Josiah} My little man is more and more fun every day!  He’s growing and changing all the time and it’s the most fun thing to watch!  Josiah is such a quick crawler and loves getting all over the house on his own.  We had to do a little more babyproofing and the house is back to baby safety standards…  Most of the time.  We’re remodeling the bathroom right now and Josiah LOVES crawling into the bathroom whenever the door is open.  We’re not sure exactly why but it’s hilarious!

Josiah has also started being able to pull himself into a standing position.  He doesn’t do it too often since he’s a lazy bum but he gets so proud of himself when he decides to do it – mostly in the bath and in his bed.

The opinions my little guy has is so funny.  Firstly, he LOVES chewing on cords – just like his big brother did.  Secondly he HATES the camera.  He’s a happy, smiley, good natured kiddo but I bring out the camera and he melts into a puddle of tears.  It’s partly hilarious and party super annoying since I love taking pictures!

Little Jojo has discovered that he adores eating.  This is one of the areas that he differs pretty much 100% from Caleb.  Josiah eats SO MUCH!  He wants at least three meals a day – if not more.  He loves munching on food himself (baby led weaning style) but always wants to be topped off with pureed baby food – at least 4 oz at a time!  Caleb hated purees and wanted to feed himself just a few meals a day.  He didn’t eat much at those meals and we’re realizing that probably had to do with his dairy intolerance too.  We’re so thankful it skipped over Josiah!

Josiah still loves stealing Caleb’s sippy cup and I was so hopeful that would mean that he would drink milk out of it but so far we haven’t had any luck with that.  He still just wants to chew on the cup and only wants to nurse…  So much for leaving him for a date night.

Josiah ADORES his big brother.  He loves laughing and, since Caleb will do just about anything to get Josiah to laugh, finds Caleb to be amazing.  Every morning and after each nap when he first sees Caleb he gets a huge smile on his face and lunges for him.  Caleb’s begun telling us that Jojo is his best friend so it sounds like the feeling is mutual.

This month I began putting Josiah in the MOPS nursery even though the timing is still not the best.  By the time I go pick him up he’s either a total mess or asleep.  Either way, he’s being held by one of the nursery volunteers.  I’m glad there are enough of them that he can take one of their undivided attention.  He has continued going into the church nursery and the gals who volunteer there absolutely adore him.  Caleb just graduated to the three’s classroom since he is completely potty trained (all the praise hands!!!) so the nursery workers are glad they now have Josiah to take the place of his big brother.  My boys are so loved at church!

Josiah is getting more and more social with other little ones.  There are four little boys within three months of one another at church and they’re all becoming the best of friends already.  They crawl around together and it’s the cutest thing to see!

The older Josiah gets the more we think he’s going to be our introverted little one.  He loves cuddling with me while observing what’s going on, different from his brother who always just wanted to dive right in.  Josiah’s a cuddly little love bug who is quick to give a huge, cheeky grin to his favorite people but is a little more unsure around those he doesn’t know.

Josiah is understanding more and more and it’s fun to watch him learn what it means to be obedient and follow directions.  He’s a sweet kiddo but, like I’ve said before, can be quite lazy so commands like “come here” usually involve him crawling halfway, sitting down, lifting his hands up, and whining until we pick him up.  We’re working on it.

Our little music man still loves to babble, sing, dance, and grunt.  I don’t think it’s going to be too long before he’s able to communicate at least via baby sign language!

Thankfully, other than a little cold, Josiah hasn’t been too sick this month.  A welcome change from the flu last month.  I’ve had a nasty cough for a few weeks but, thankfully, Josiah hasn’t gotten it from me!

Josiah lasted two and a half more months of life than Caleb did before going to the emergency room.  I was working on a craft project for MOPS that involved little magnets while Josiah was across the room.  Caleb needed me so I left to help him.  When I got back, Josiah had crawled over and stuck some magnets in his mouth.  Unfortunately, I had no idea how many I started with so I didn’t know if he had swallowed any.  Nate and I agreed I should take him in for an x-ray and, since the person who runs the x-ray machine wasn’t in at the urgent care, I had to take him to the emergency room.  Two x-rays and three hours later we found that he had not swallowed anything.  Thank goodness.

My little monster is sleeping through the night!!!  All the praise hands!!!  When I was struggling with my recurrence of anxiety, we realized a large portion of it was stemming from my lack of sleep.  I’m already a horrible sleeper and add in waking up at least twice a night…  No good at all!  We decided we needed to sleep train our little man.  It took longer than Caleb (five night total instead of two) but he’s now sleeping from 8-7 with a dream feed before I go to bed.  It is so wonderful to reach this stage.  I feel like a whole new person!

Josiah is also officially down to just two naps now.  In some ways it’s great because he’s awake more at night but in other ways it’s rough because his naps no longer overlap with Caleb’s.  I pretty much have someone sleeping at my house from 10-4 and that’s my life.  Thankfully Josiah’s pretty good about sleeping while we’re out and about so I make sure at least one of his naps is at home but often the other one happens in the car, stroller, or while I’m wearing him.

My precious Jojo,
I love you, I love you, I love you!  You are the sweetest little man and your huge, goofy grin lights up whatever room you’re in.  I adore how fun and silly you’re getting and how much you love to sing, dance, and laugh.  I thank God for giving us you all the time and can’t imagine a more perfect little one in our family!

Check out Caleb at Nine

Your Turn:
What was your little one up to at nine months?