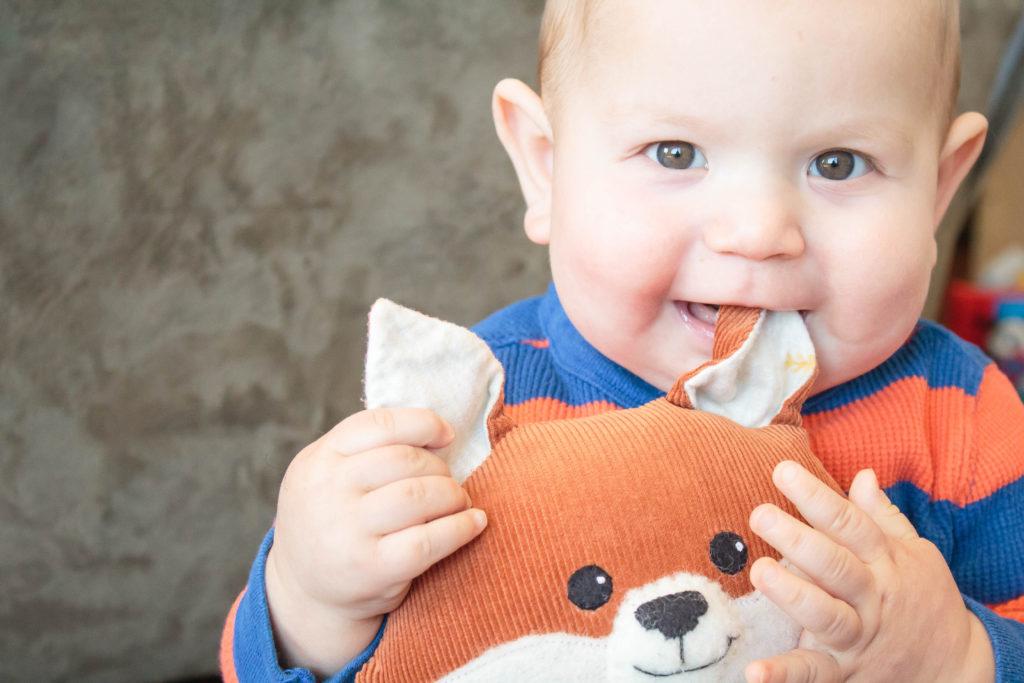 Ten Months at a Glance {Josiah} All Josiah wants to do these days is stand himself up.  He loves crawling over to everything to pull himself up.  He’s started walking around furniture while holding on and is beginning to lower himself slowly without plopping himself down.  Caleb was doing all these things at 10 months too and I was sure he was going to walk by a year…  And then he waited until 18 months to walk…  So I’m not putting anything out there for when I think Josiah is going to start walking.  Thankfully he has stopped pulling himself up to stand in his crib as often as he was.  He’s still struggling in the sleep department (more on that later) but it’s not because of standing.

Earlier this month my dad passed away unexpectedly so Nate and I had to rush out to Spokane with Josiah and our nephew to help with some of the results of the death like cleaning out his house, meeting at the funeral home, etc.  Josiah was such a trooper the whole trip.  He brought so much joy to Nate and me with his smiles, cooing, and snuggles and, every so often, would let someone else hold him too and get some much needed snuggles.

Josiah is still eating a crazy amount!  He’s still feeding himself a’la baby led weaning but also still wants to be topped off with purees.  He’s nursing like a champ four times a day but it’s definitely not enough for him.  Since he nurses after he wakes up, he often demands even more food as soon as he is done with me…  His crying makes us certain that’s what he’s after.  There’s still been no drinking from anything other than mama and I’m hoping we can get that to change by the time he’s one…  Time will tell…

It’s official that I’m Josiah’s #1 person, Caleb is his #2, and Nate is his #3.  He totally and completely adores his big brother and loves goofing around with his daddy.  Josiah is quick to smile and giggle and it’s precious to see how happy of a little guy he is.

Nurseries are still an issue for Josiah.  He screams when I drop him off at church or MOPS.  It’s absolutely heartbreaking.  Thankfully he typically calms down within about 10 minutes and, as long as he’s being held, he’s ok the rest of the time.  His nap schedule is much better situated now for going to church and MOPS in the morning.  When I pick him up and rush him home we don’t get a car nap/miss his first nap.  It’s fantastic!

It’s the cutest thing to see Josiah recognizing people more and more.  Since we had our nephew for a week and he’s just four months older than Josiah, Jojo bonded with him.  It is so fun to have cousin friends!

It’s so fun that Josiah is such a fun, happy little boy.  He absolutely adores cuddling, hugging, and kissing and laughs so easily.  Since Caleb appears to be more of an out of the box thinker (read: devious), I’m just envisioning him getting Josiah into so many predicaments in the future.  It’s going to be so much fun raising my two precious boys!

Even though he’s happy, Josiah gets fussy and grumpy looking around people he doesn’t know.  He would be completely happy if his life only contained Nate, Caleb, and me.  I know that’s fairly normal for this age but I still wish he were a little more friendly…  It’s a good reminder that I need to accept my little man for who he is.

I’ve started attempting to teach Josiah basic sign language and he’s not having it at all.  He either looks at me like I’m crazy or starts laughing whenever I try to sign with him.  Maybe he’s just an evil genius…

Whining and gestures are still pretty much Josiah’s chosen methods of communication but he’s also started babbling more and more every day.  It’s so fun to drive somewhere in the car and hear him in the back chatting away.  Caleb loves interpreting for him and it’s amazing how much Josiah apparently loves talking about trains…  😉

While we were headed to Spokane, all four of us came down with a nasty cold.  Josiah had a green, snotty nose for a few weeks, a cough, and (if he had the same symptoms I did) a sore throat.  This caused him to start waking up during the night again which has been rough!  This round of cold has been horrible and I’m thankful he’s finally mostly through it!

The beginning of the month was fantastic!  We had discovered that the dream feed was no longer necessary so I was getting about 12 hours without a baby attached to me and it was glorious!

Getting sick, though, threw Josiah off on his sleeping.  We had just gotten him sleeping through the night and there we were, back to him waking up at least once a night.  Since I knew I was feeling pretty sick and we were in a different location I went back to letting him nurse during the night when he needed to.  We’re traveling a ton the next month for wedding receptions, work conferences, the memorial service for my dad, and other things so I’m not going to worry about getting him back to his better schedule until life is a little more back to normal.

Naps are still about the same and I still have someone asleep at my house from 10-4 but I know it’s a season and, hopefully, by this summer when it should be nice and we’ll want to be outside, I’ll have my guys on a more corresponding schedule. My beloved Jojo,
This month was hard – not because of you but because of so many other things.  You brought so much joy to my heart this month with your easy going smile, your ability to be packed around, and your hugs and kisses.  I’m incredibly thankful that I am your person and you choose to love me so deeply.  I pray our relationship always stays strong.  You are growing into such a precious little one and I know God has amazing things in store for you!

Check out Caleb at Ten Months

Your Turn:
What was your little one up to at ten months?