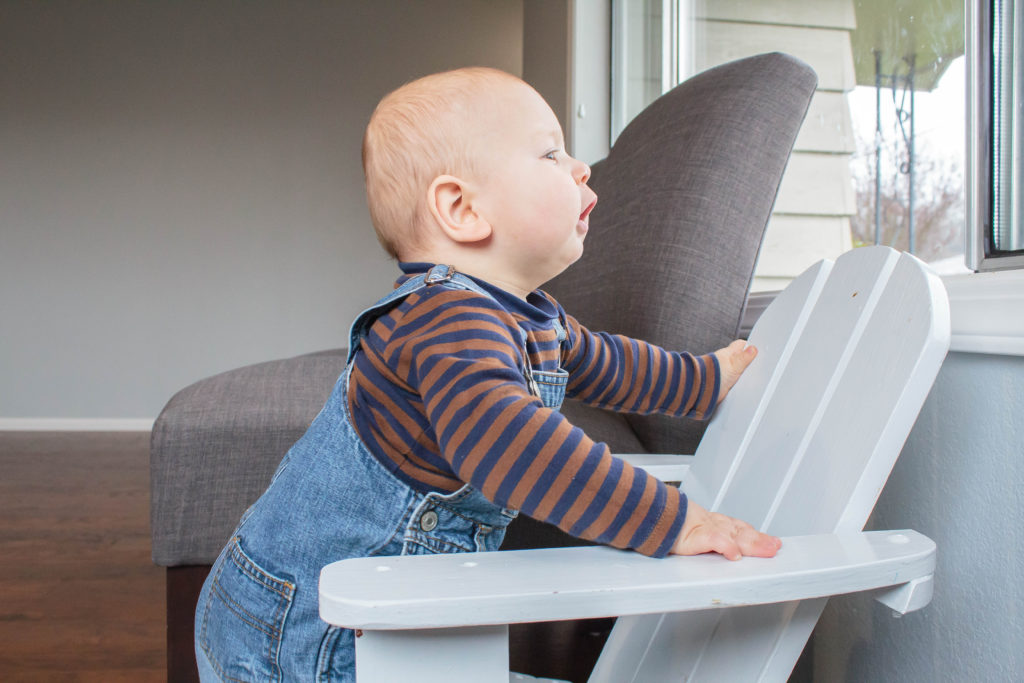 Eleven Months at a Glance {Josiah} Josiah is growing by leaps and bounds and it’s such a blessing to watch.  He climbs, pulls himself up to standing, speed crawls, and so much more!  Just recently Josiah started being able to support himself standing for a few seconds at a time if he’s in the mood.  Josiah is still pretty lazy so doesn’t want to try on his own too often…  But we know it’s possible.

One new thing Josiah’s been up to is that he has begun crawling up stairs.  We don’t have stairs at our house but while we were visiting Nate’s parents, papa thought it would be fun to encourage Josiah to go up the stairs a million and a half times.  Unfortunately, he still can’t go down…  So there’s that.

We traveled more this month – to Lake Stevens for Nate’s sister’s wedding reception and to Spokane again for my dad’s memorial service – and, because of that, Josiah is still pretty thrown off in sleep and is a little more cranky than he typically is.  I think he senses the stress and grief that I’m dealing with and he’s working through it too.

Oh dear goodness, Josiah eats SO MUCH these days.  He is constntly stuffing his face with food and then wants me to feed him purees on top of that.  If he’s only doing purees then he eats two 4 oz jars at a time.  It’s insane.  No wonder he’s still such a chunk!

On top of loving to steal Caleb’s sippy cup, this month Josiah also learned how to use a straw.  Even so, he is still not a fan of doing it unless it’s his choice (although he’s more lazy than stubborn like his brother) so I still have to be around to nurse him.  Thankfully, since he’s eating so much and filling himself up, it’s not as imperative that I’m around at the three times a day he typically nurses and it’s great to start having a lot more freedom in my life.

We spent a weekend with Nate’s family for his sister’s wedding reception and it was the first time in three years all his brothers and sisters were together.  The following weekend we spent with my family for my dad’s memorial service and it was the first time in four years all my siblings had been together.  It was wonderful to see all the family and Josiah did such a great job being friendly and passed around.  Since he’s typically a mama’s boy, I was thrilled that he shared the love with his grandparents, aunts, and uncles.

Although he did great with extended family, Josiah is still not a fan of nurseries.  Since he goes into nurseries three times a week (Sunday mornings for church, while Nate and I help with Youth Group Wednesday nights, and Thursday mornings at MOPS) I would think he’d be used to it.  Instead, he cries, shakes, and grabs onto me as I’m dropping him off.  I had him off to a worker and, thankfully, when I come by about two minutes later, I don’t hear him crying.  He often has to be held the whole time he’s in the nursery but at least he consistently stays without crying now.

This month the little dude has shown us his personality more than ever.  It’s so precious to see him becoming such a clown.  He adores his big brother’s antics and laughs and laughs when Caleb’s being silly.  I have a vision of them in the future – Caleb’s going to be a little crazy monster who convinces Josiah to do all sorts of things that will get both of them into trouble.  Although I know it’s going to be annoying, I’m also really excited for it.  I love that the boys adore each other and that both their faces just light up when they see the other one.

Baby sign language is a joke to Josiah.  He seriously looks at me and laughs every time I try to teach him signs.  It’s pretty hilarious and I’m hoping that he learns to talk before two years (how his brother was) if he’s not going to sign.

Even though Josiah doesn’t sign, he’s understanding SO MUCH!  It’s fun seeing his brain working on overdrive as he learns what we’re saying.  He either follows our directions (especially “no”) or laughs at us because he doesn’t want to obey and it’s really funny!

Jabbering and “singing” are two of Josiah’s favorite things and he gets more and more “talkative” every day.  Some of the jabbers he says sound like real words so Caleb loves telling us that Jojo is saying certain things like “Yeah,” “I love you,” and “Bubu” (Caleb).  He can’t wait until Josiah can start talking.

A day before we were heading to Spokane Caleb got sick.  I took him to Urgent Care only to find out that he had the flu.  We deliberated taking him and decided it was more valuable that we did (given that it was my dad’s service).  We were holding our breath, waiting for Josiah to come down with the flu as well, and he never did.  We definitely were thanking Jesus.  (And thanking Him that none of the cousins got the flu)

Although he didn’t get the flu, Josiah did get a few colds this month.  I don’t think everyone in our house has been well since November.  I’m ready for summertime!

With all the traveling and the fact that Josiah is cutting four teeth he has become a pathetic sleeper again.  Thankfully it’s only about one in three nights that he’s up but, on the nights that he’s awake, he’s awake for about three hours – usually from about two to about five.  It’s the worst.  This next month only includes one overnight away and we’re hoping that we’ll be able to get him used to always sleeping through the night again.

During this night time sleep struggle Josiah has also begun the transition to one nap a day.  I LOVE the days that his nap and Caleb’s nap overlaps because 1. We’re able to get out of the house in the morning AND afternoon and 2. I’m able to have personal time while the boys are sleeping.  I’m sure this month it will become a permanent thing and I’m all about the praise hands for that! My precious little boy,
I can’t believe you will be one in less than a month!  It feels like yesterday I was snuggling a brand new little bundle who grabbed onto my heart and didn’t let go.  I’m so thankful for you for hundreds of reasons.  You bring a light into my life during this hard season  Your giggles and grins remind me of the good in the world while I’m struggling through grief.  I thank God daily for your life and the fact that He let me be your mama.

Check out Caleb at Eleven Months

Your Turn:
What was your little one up to at eleven months?