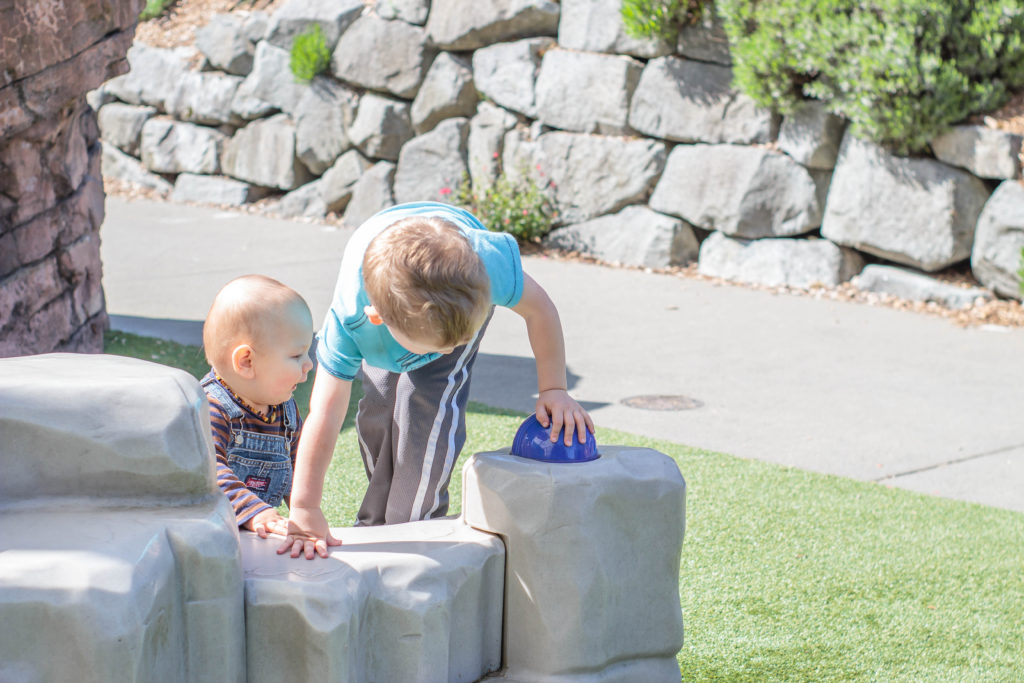 As odd as it sounds, one of the best things about being married to a pastor is his odd work schedule.  Since pastors work Sundays and often have things going on at the church on Saturdays, Nate’s for sure day off is on Monday.  Our introverted, crowd hating hearts are so happy that we can adventure together on Mondays while the rest of the world is at work and at school.  You may have seen in my Instagram stories this Monday, we decided to take a family fun day and visit the Point Defiance Zoo and Aquarium in Tacoma, Washington!

We debated between heading to the Portland Zoo and visiting the Point Defiance Zoo and the Point Defiance Zoo won out because it was about half an hour closer and we had never been there before.  Beyond that, this zoo includes and aquarium and Caleb’s a little shark obsessed so he was thrilled he got to see one!  (He also begged us to see the dinosaurs and we had to break it to him that they’re not around anymore)  It was fun to get to compare the two zoos.  We did decide that we liked the Portland Zoo better simply because it’s bigger and there are more animals to see but the Point Defiance Zoo was still a win in our books – especially since it has a fantastic play area!

On this adventure, I finally got to break in my brand new Tula!  We borrowed one from my sister in law when we babysat her kids for a few days and Nate and I both decided it was totally worth the investment to get a more expensive baby carrier.  (Although we did get it for a great price since we went through wikibuy!)  I’m a babywearing mama and wouldn’t have it any other way!  Plus, isn’t the pattern adorable?

We spent about three hours at the zoo and it was perfect to visit all the animals and have plenty of time left over to play at the playground.  If you’re anywhere near Tacoma you NEED to visit this zoo! The Point Defiance Zoo and Aquarium really wants people to purchase their tickets online!  They want it so badly that tickets are two dollars cheaper online than at the gate.  With smartphones it would be possible to purchase your tickets online in the parking lot but, being a planner, I would recommend buying them even before then!

We didn’t realize when we were heading out that the zoo closes at 4pm.  We arrived at 1pm and, thankfully, that was enough time to do everything we hoped to do but we were incredibly thankful we hadn’t pushed off going even later.  Unfortunately, we did miss all the shows, talks, and feedings since we arrived so late and had to see all the animals a bit quicker.  I’d advise doing the zoo in the morning, especially since I’m told more animals are out in the morning.

There are SO MANY paths at the Point Defiance Zoo!  When we first started out we skipped getting a map and quickly realized we would miss out on seeing some of the animals without it.  A map was also great for Caleb since he thought that simply holding it made him the guide.

If you’re from the Pacific Northwest or have visited here much, you know that we tend to be pretty green.  The Point Defiance Zoo and Aquarium encourages people to bring their own water bottles and they have bottle filling stations all over the zoo.  It was so great to not have to spend money on bottled water and/or drink warm water that’s been sitting in your bottle in the sun all day.

Visit the Play Area at the End

We made the mistake of telling Caleb there was a cool playground at the zoo.  The whole time we were looking at animals he asked us over and over again when we were going to go play.  Once we finally got there he definitely did not want to leave.  We spend a good 45 minutes at the play area and could have spent a lot longer.  There were even fun climbing toys that non-walking Josiah enjoyed with a very padded ground for when he fell.  We were huge fans of the playground! Your Turn:
Have you visited the Point Defiance Zoo and Aquarium?
What is the best zoo you have visited?