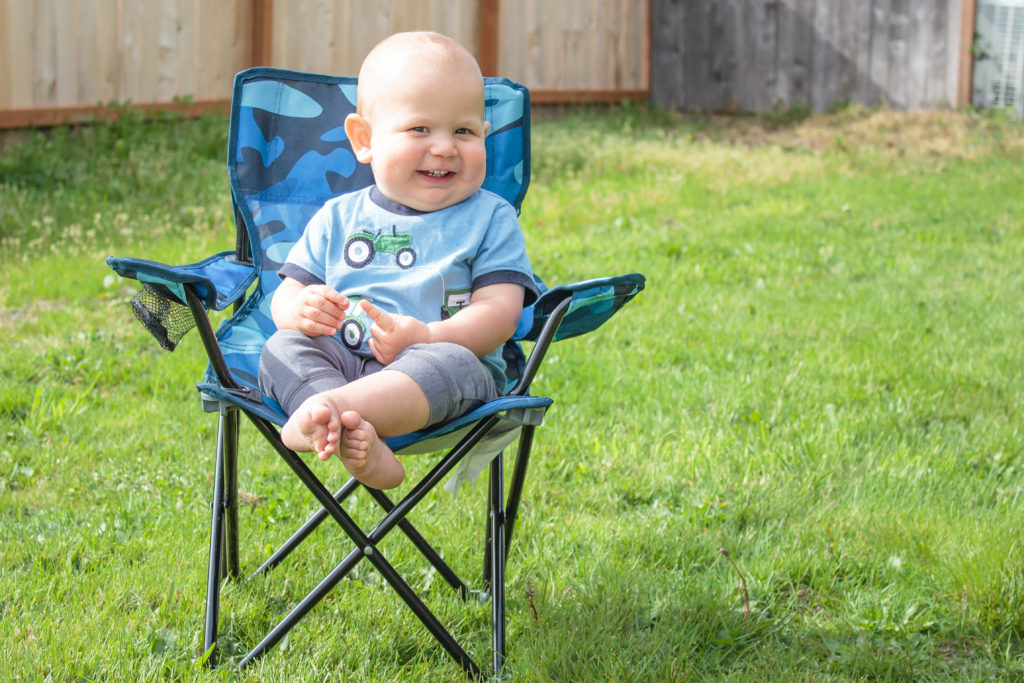 My favorite thing about being your mom right now is seeing the way you and your brother simply adore one another.  Caleb is constantly asking about you, wanting to play with you, trying to tell you what to do, and tackling you.  You take it all in stride and always get the biggest smile on your face when you see your brother walk into a room.  For all the time I spent telling Caleb not to wrestle with you, it now is clear that wrestling is your favorite thing to do as well and you can absolutely hold your own!  Caleb loves “chatting” with you, holding your hand, and trying to get you to walk.  The two of you are the best of friends and I pray that friendship continues for the rest of your life!

Your sweet little spirit is evident to everyone who spends time with you.  You are quick to laugh, love being cuddled, and are a mover and a shaker.  I know that God will use your easy going, fun loving personality in amazing ways and I don’t really want to admit it, but I’m excited to see all the shenanigans you and your brother get yourselves into.

When I was pregnant with you I was so worried that it would ruin my life.  The first year of life with your brother was incredibly hard and I couldn’t imagine going through that again.  I’m so thankful God knew what he was doing and gave me you!  You are feisty but you’re also so easy going.  You have struggled with sleeping through the night but you still, even at a year old, can easily nap while I have you in the carrier.  You’re not an easy baby but you’re definitely the baby I needed to begin healing my heart.

Although our family has gone through some really hard things this year, your precious spirit and loving demeanor is one of the things that has kept me focused on the good in life.  You remind me that I can overcome my past and make a new story for my family.  You remind me that I can have a different kind of legacy.  You and your brother bring me an unbelievable amount of pride and joy!

I love watching you grow and learn new things.  You have been precious to watch as you learned to roll over, crawl, and stand!  I can’t wait to see you take off walking and I know nothing is going to hold you back.

I pray for you all the time and ask that the Lord brings you to Himself at a young age.  I pray that your heart is soft to the Lord and that you grow up to be a man who lives a Godly life and draws others to Jesus!

I love you so much, precious Jojo, and am so excited to see what this next year has in store for you and for our family!

Josiah is learning more and more each and every day and it’s absolutely precious to watch him develop.  Every day he gets closer and closer to standing by himself but he hasn’t quite decided that he’s ready to do it yet.  He also still doesn’t like to walk while his hands are being held even though he cruises around furniture all the time!  Caleb wants so badly to walk with Josiah holding his hand so I’m hopeful that will come soon.

Earlier in the month Josiah began waving.  He reserves it for special occasions and special people but it’s so cute to see his little hand come up and wave.  Since they’re few and far between I eat them up when I get them.  It’s better than the rest of the time when he just cries when I leave him.

Josiah has begun the stage where he climbs onto EVERYTHING.  I mean, he definitely was a climber before this month but recently he is a CLIMBER!  He’ll climb into chairs and sit himself down, he climbs into Caleb’s Little Tikes car, he climbs onto the brick in front of the fireplace, and he climbs onto the coffee table.  We’re teaching him that he needs to sit down on these things so he doesn’t fall and, thankfully, he has yet to get hurt.

There’s no slowing down on the eating department.  Josiah loves eating and will eat most things that are put in front of him.  Recently we realized that it was ok for us to give Josiah cheese.  Since we never give Caleb cheese due to his dairy intolerance we hadn’t even thought about the fact that we could give Josiah some.  Now cheese sticks are probably his favorite food and it’s great to be able to hand him one while I’m doing something like getting dinner ready.

Josiah is finally getting the hang of straws and sippy cups.  Right now he’s just doing water in them but I’m excited to start introducing whole milk and seeing if he likes it.  We’re going away overnight next month so I’m just praying that Josiah is able to drink from a cup in some form by then.  I know it wouldn’t be the end of the world if he didn’t drink much for 24 hours but it would definitely put me more at ease.  All that being said, nursing is still going strong at three or four times a day and I’m planning on going at least a few more months before weaning him.

Josiah is getting to be quite the little troublemaker.  He’s learning more and more what it means to test boundaries and he wants to know if we’re always going to be consistent with him.  Josiah will do something he knows he’s not supposed to (like stand on the bricks in front of the fireplace) and then look at Nate and me, smiling, as if asking us what we were going to do about it.  We do our best to keep things consistent with him so he begins to learn boundaries.

The nursery is still Josiah’s enemy.  Ok, that’s not completely true.  In reality, he screams for about two minutes after we leave and then is fine – especially if he’s being held.  It’s hard leaving him while he’s screaming but I know that he enjoys it within minutes and I enjoy the things I have to do without him (church, helping in the youth group, and MOPS).

Even though Josiah doesn’t love the nursery, he DOES love other babies.  I don’t know what it is about other people who are his size or smaller but he’s always thrilled to be around them.  He’ll give other babies kisses, try to hold their hands, and jabber away happily at them.  I’m guessing I have another extrovert on my hands…  Pray for this introverted mama!

We have decided that, like his brother, wrestling is Jojo’s love language.  He loves being tossed around, tackled, and crawling all over us.  Anytime one of us sits on the ground his gets a silly grin on his face, lets out a little giggle, and climbs right on – attempting to knock us over.

Silliness and lovingness (I don’t think that’s a real word…) are the two words I would use to describe Josiah these days.  He has such a wonderful mixture of love and tenderheartedness and giggles and goofiness.  I’m excited to see how his personality progresses as he gets even older!

This month Josiah has been a little more moody than previous months and I think a part of it is that he really wants to communicate but doesn’t know how.  He cries to get us to understand him and, if we don’t (or if he feels like we don’t) he cries even more.  He screams when any of us leave (or if he thinks any of us are leaving) and definitely gets his point across.

I’m still trying to teach Josiah some baby sign language and hoping that could help alleviate some of his frustration but he still just laughs at me when I try.  I don’t know if that’s the route we’ll end up going but I’m going to keep trying!  That being said, he has begun to hold up his hands when he’s done eating to get us to pick him up so I think that *maybe* we’re headed in the right direction.

Although communication is a struggle, Josiah is definitely understanding so much!  He responds really well to things we ask him to do and it’s great because I know that’s stage one of learning to talk.

No big injuries this month – only a cold that won’t seem to go away.  We all have it and it’s super annoying!  I can’t wait until summertime because maybe we’ll finally all be well.

We finally got Josiah back to sleeping through the night now that we’ve been home most of the month.  It’s wonderful to get to sleep all night without stumbling out of bed to console a screaming baby.  Recently, though, he’s begun waking up between 6 and 6:30.  I know that’s not early for a lot of families but we’re a sleep in family (ok, I’m a sleep in person and Nate’s a quiet time in the morning person).  Caleb doesn’t get up until 7:20 and even that feels early.  Nate gets up before Josiah does and takes care of him while trying to get ready until 7 at the earliest so I can kind of sleep.

Last month I was saying that Josiah was down to one nap but that has changed.  Since he’s now getting up over an hour before he was previously getting up, we’ve had to change him back to two naps.  It’s great not having a grouchy baby but it’s back to cutting into my mama time while both boys nap at the same time…  Having a happy baby is much more appreciated than mama time, though.

Check out Caleb at a Year

Your Turn:
What was your little one up to at a year?