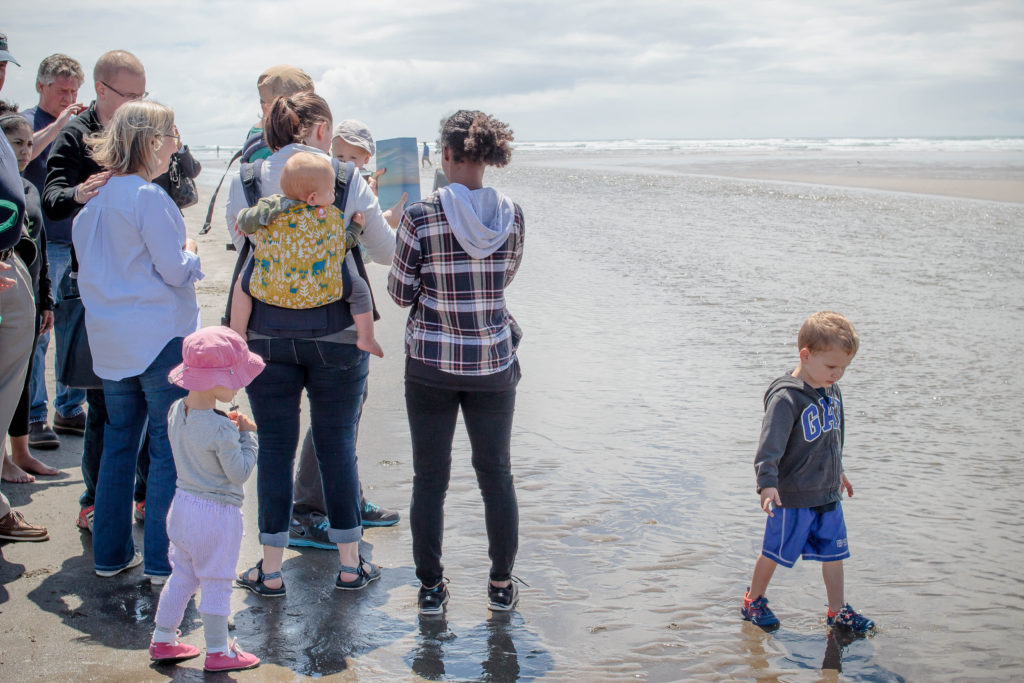 How to Talk to Your Preschooler About Death Those words were the ones I was dreading hearing from my three year old.  Up until then, Nate and I had kept his grandfather’s death from him, not needing him to be concerned about something he didn’t need to understand quite yet.  That question, though, was the one I knew I had to answer – the question I had been processing and praying over for about a month.

I knew the conversation had to start with that question since our desire is to be as honest as possible with our children.  I knew that this loss was going to be a part of my little boy’s life story and it was something he needed to begin processing.  I also knew that this was a perfect opportunity to share more of my faith with my son, praying that he will someday choose it as his own.

Last weekend I took my boys to the Oregon Coast with some of my family to spread my dad’s ashes.  It was a hard and confusing trip, processing a lot of my own emotions and helping Caleb process his own emotions.  It was a time to work through (at least a little more) the fact that my relationship with my dad had never been great and mourn the loss of what could have been.

I don’t have it all figured out.  I’m still processing things in my own head.  I’m sure I’ve said things that don’t make sense and added to Caleb’s confusion but I hope and pray I’m paving the way to understanding for him.

How to Talk to Your Preschooler About Death

Get on the Same Page as Your Spouse

It’s important that couples discuss heavy topics like this with one another before discussing it with the child.  You want to make sure the two of you are going to address it in a similar fashion to your preschooler.  As often as possible, especially at the beginning stages of the conversations, include both parents in the conversation so you both know how the child is reacting and you can discuss what else needs to be said or done.  You are a team and need to present a united front to your confused and hurting preschooler.

Don’t Explain it all at Once

There’s no need to explain everything about death all at once.  We waited over a month before telling Caleb anything about the death of his grandpa – partially because we were processing the unexpected event and partially because he didn’t have a close relationship with his grandpa and didn’t see him often.  Once we did begin having the conversation, we kept the explanations brief and to the point, only addressing the things that came up during that conversation and letting other aspects wait for later.  We started by explaining that grandpa died and we will not see him again, even when we visit Mimi.  It wasn’t until later that Caleb realized he didn’t know what “died” meant so we discussed that with him.  Even when he came with me to spread my dad’s ashes at the Oregon Coast, I simply explained to him that we were spreading dirt to remember grandpa because we miss him.  Someday he’ll learn what it truly means to spread ashes but that can wait.

Don’t Allow it to be Scary

Since death is confusing, it can become super scary to kids.  I’ve had friends say that, when they were kids, they worried about people dying of colds because they were told that their grandparent was sick and died.  Things like that are things we want to make sure do not plague the minds of our preschoolers.  Make sure to always use positive language and ensure the child that they will not die from getting sick or hurt.  Explain that most of the time people don’t die until they are old.  (Granted, that might cause your preschooler to ask you if you’re going to die when you turn thirty since thirty is really, really, REALLY old.  #TotallyHappenedToMe)

Let the Child Guide the Conversation

Your child is probably processing things in ways you can’t imagine so let them be the ones to guide the conversations and ask questions.  Don’t make it seem or feel awkward.  I’ve had conversations about my dad’s death in Walmart, in the car, at church…  I’m sure people overheard things that were shocking to them but my child’s questions trump people overhearing me talk about death.  Also let your child be the one to end the conversation, even when you feel you’re on a roll explaining things.  The other day, as we were driving, Caleb was asking me questions about Heaven, and grandpa, and death.  I was feeling super good about the answers I was giving and the responses he had to my answers.  His next question was then “Can we get chips at the store?” and, from there on out, we were talking about chips.  I knew his little brain was filled to capacity with the death talk and he needed time to process the information he had received so I didn’t change the conversation back.  I simply enjoyed talking to him about chips.

Please, please, please, I implore you to not make things up as you talk to your kids about death.  It’s confusing to each one of us and hard for anyone to grasp but DO NOT MAKE THINGS UP!  It will confuse your child as he gets older and will, in the end, make things worse.  Figure out what you believe about death – your religious convictions, what happens (or doesn’t happen) to a persons’ soul, and things like that – and share your beliefs with your child.  Those are not lies in my eyes, even if, in the end, you are incorrect.  Speak truth to the best of your ability!  You may not be ready to speak certain truths to your children and I believe it is ok to avoid things or give age appropriate, mostly true, answers but do not lie.  We are not ready to have the conversation with Caleb about how my dad died but we are giving him snippets of answer when he asks and do not give him any response that isn’t true.

Point it all Back to Jesus

Since I am a Christian, my hope in death is in Jesus and I will do everything I can to point my children in that direction – praying that they will choose to have a relationship with Jesus as they grow.  Death is a perfect opportunity to have talk about Jesus – who He is, what He has done, and why we don’t need to be scared of dying.  Jesus gives us hope in a horrible time and can bring good out of such darkness. Your Turn:
Have you had to talk to your preschooler about death?
Any tips you would add that can help all of us as we continue having these conversations with our kids?