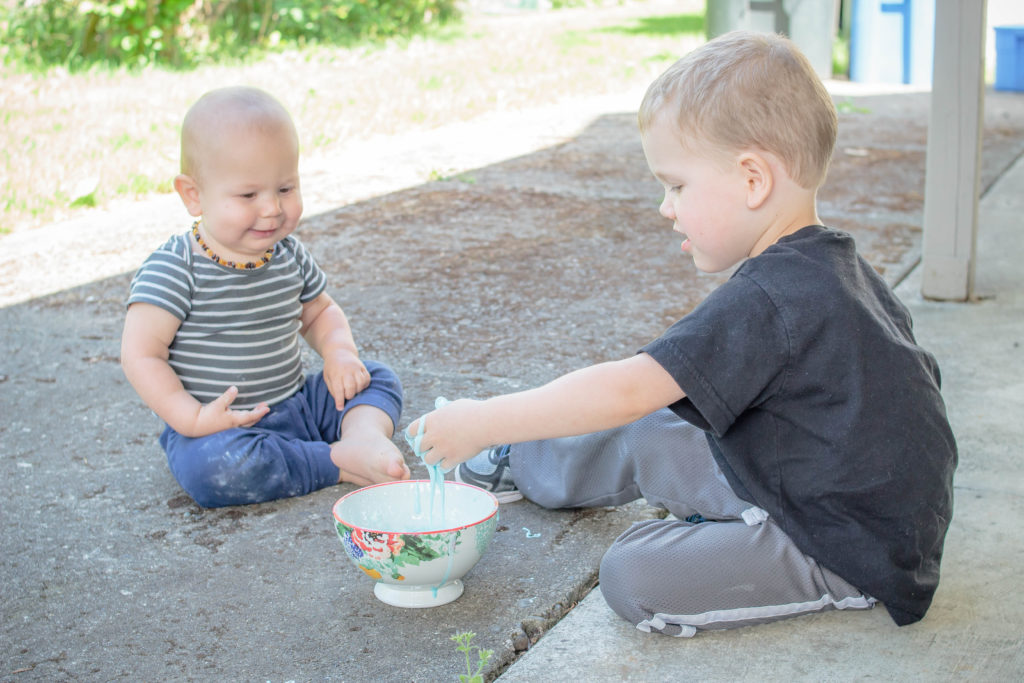 Oobleck ~ Edible (But Not Tasty) Slime Anyone else have kids that are obsessed with slime?  I don’t know what it is but for some reason slime is magical!  My boys were introduced to it recently (I know, we’re late to the game!) and couldn’t get enough.  I knew that, as soon as they tried it, they’d want to play with slime over and over and over and over again.  I looked up recipe after recipe and, unfortunately, each one was either full of ingredients my one year old shouldn’t be putting in his mouth or super sugary.  Neither option floated my boat so I knew I needed to think up an edible slime recipe that wasn’t tasty.

My mind wandered back to my own elementary school days when I distinctly remembered making some sort of slimy goodness out of cornstarch.  I was pretty sure it had been inspired by a Dr. Seuss book.  A little digging and I found it – Oobleck!  And I had been right, it was inspired by the book Bartholomew and the Oobleck!  (I’d highly recommend getting a copy if you’re going to do this project with your kiddos!)  I was so excited!!!  Sure enough, all the ingredients were completely edible!  My boys were going to love it!

I whipped up a batch of Oobleck, took the boys outside, and let them at it!  Although it had been my one year old who I was concerned with eating it, it was Caleb, my three and a half year old, who immediately took a handful and placed it in his mouth.  #KidsAreCrazy  Once I convinced Caleb it wasn’t a snack, both boys had a blast letting the slime ooze through their fingers.  And yes, Josiah started eating it by the end of play time.  Maybe I should feed them more often…

One fun thing about Oobleck is that it’s not like other slime.  When it’s on the ground or in the bowl it is fairly solid and then, the moment you start playing with it, it gets slimy and slippery.  It’s the weirdest, most awesome thing!  The Oobleck entertained my boys for about an hour, which in toddler and preschooler world is a total win!  You absolutely need to make some for your kids! 1. If you’re wanting colored Oobleck, stir the drops of food coloring into the water
2. Pour the colored water into the bowl of cornstarch and mix well
3.  THAT’S IT!  Get to playing! Don’t forget to get your copy of Bartholomew and the Oobleck to read with your kiddos while playing with the slime!

Your Turn:
Are your kids slime obsessed?
Have you ever played with Oobleck?