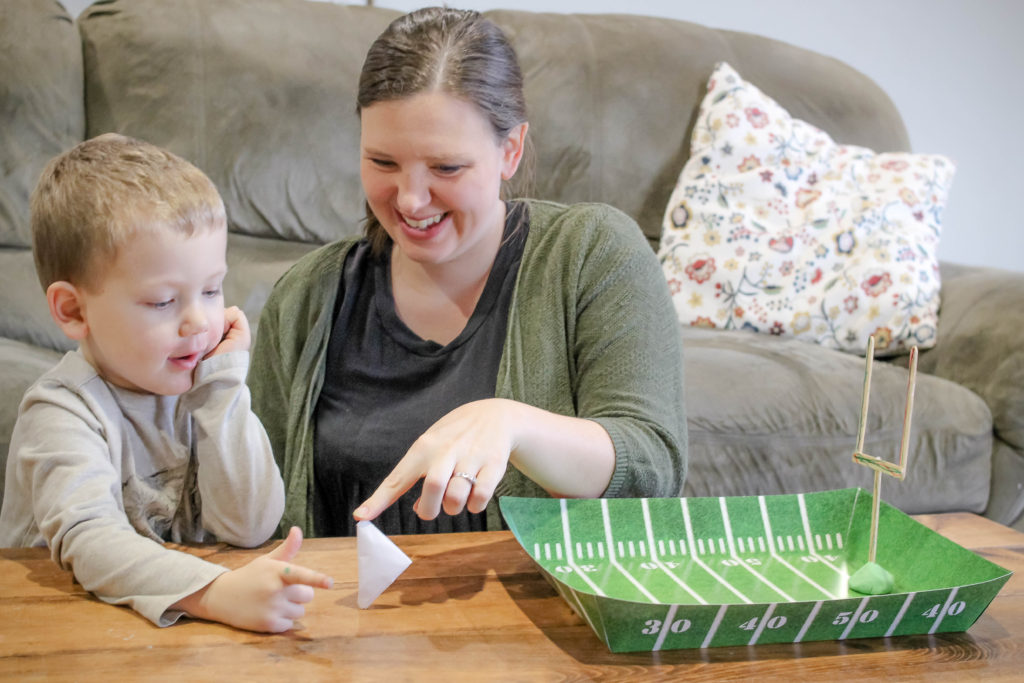 How to Make a Football Game at Home

This post is sponsored by Frank’s Red Hot but the content and opinions expressed here are my own.

Looking for how to make a football game at home? Look no further!  This is the perfect football craft for preschoolers and you end up with an amazingly fun homemade football game you’ll want to play over and over again. I’m gonna be straight up honest with you right now.  We don’t do football in our home.  I know, that’s blasphemy, especially here in the PNW where the Seahawks are life.  I have to say, I love that afternoons and evenings aren’t taken up with my husband sitting in front of a TV cheering on his team.

Instead of being football people, we have labeled ourselves as “social football watchers.”  That’s the formal way of saying “Invite us to your house if you’re having a football party so we can hang out with people and eat yummy food.”  Emphasis on the yummy food.  I’ll even bring some Frank’s RedHot Wings.  You know, the wings made with the super tasty Frank’s RedHot, the original buffalo sauce.  You’re welcome. One of my party skills at football games (besides chatting with the other women in the kitchen) is keeping the kiddos entertained.  Since I have a short football attention span, I get where kids are coming from when they get antsy and start annoying the die hard football fans.  I love coming up with fun activities for the little ones to do.  Recently I created a fun football craft for preschoolers that turns into a homemade football game and it provided tons of entertainment for Caleb and his friends. How to Make a Football Game at Home

1. Encourage the kiddos to decorate the popsicle sticks.  Make them beautiful!  Once they’re done, hot glue the sticks together to form a goal post.
2. Use the play dough to stand the goal post up to play the game.
3. Fold a piece of paper into a paper football.  We use this tutorial.
4. Take turns attempting to flick the football through the goal posts.  It’s so much harder than it looks! Bringing everything kids need to make this homemade football game will win you points…  but bringing the supplies AND Frank’s RedHot Wings (shoutout to Walmart for being a one stop shop!) will basically turn you into a celebrity.  I mean, the amazing taste and fantastic convenience of the wings plus occupying the kids?  You’ll definitely be invited back!  In fact, bring Frank’s RedHot Wings to any event or occasion – big or small – and you’ll be gaining friends left and right.  😉 Your Turn:
What football craft for preschoolers do you bring to games?
Which Frank’s RedHot Wings are you going to try?