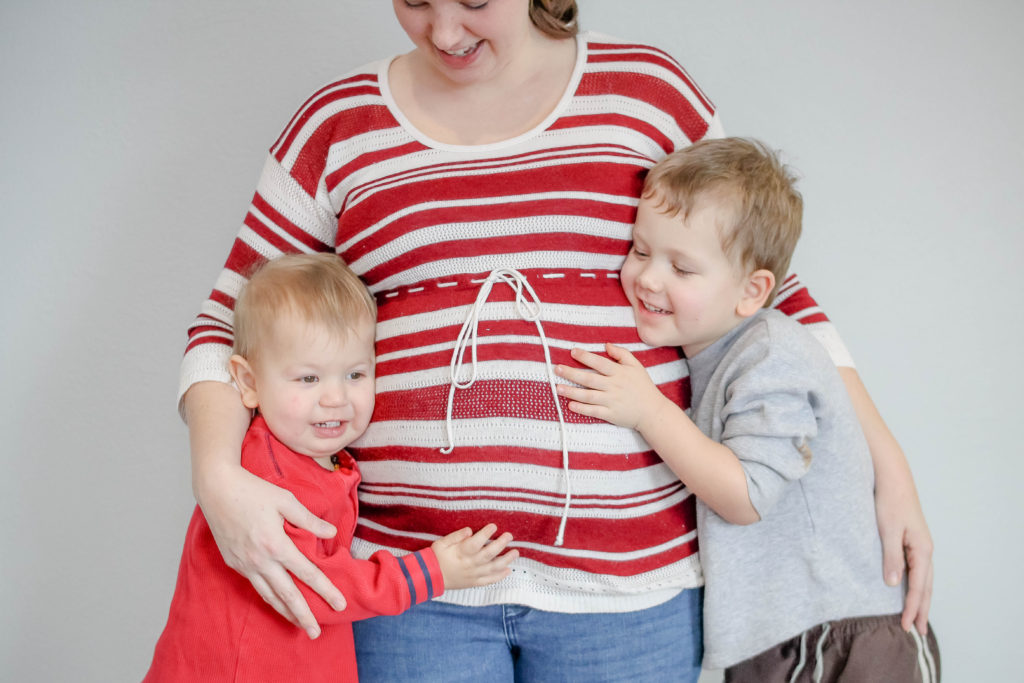 Do you know a mama expecting another baby boy?  If she’s like me and is pregnant with her third boy, I’m sure she’s heard all sorts of well meant “words of wisdom” that are probably doing more harm than good.  Here are six things not to say to her and two things that you should be saying!  Remember, there are tons of benefits of an all boy family! In just two days I’ll be starting my third trimester of pregnancy with my third boy.  It’s overwhelming, exciting, and exhausting to be expecting another baby boy but that roller coaster of feelings is to be expected.  As with my other two boys, it was clear from the moment the ultrasound wand rolled over the right location that our little person was, in face, male.  The difference was that I was guessing that my other two were girls.  This one I just knew was another boy.  Three boys.  My life is crazy.

While I processed my emotions surrounding having another boy and got totally pumped on the benefits of remaining an all boy family, I knew I had to get my head on straight in order to handle the things other people were going to say to me about being pregnant with a third boy.  I had already gotten so many comments about people hoping and praying Baby K 3.0 was a girl and I could feel people’s lovingly intended responses in a palpable way long before we told anyone that baby Daniel was on board.

Now, this post is not intended to call anyone out.  If you’ve said these things to me, please don’t feel bad!  I promise I’m not holding a grudge and I know you love my boys and me!

What Not to Say to a Mom Expecting Another Baby Boy

You’ll Have to Try Again for a Girl

Ummm…  Fun fact.  You can’t try for a specific gender.  I mean, there are ways to TRY for a specific gender but nothing is guaranteed.  So, if you’re wondering, Nate and I want four kids so we will be trying for a fourth eventually but no, it won’t be specifically in order to have a girl.  I’m fully expecting our fourth to be another boy.  Because we’re really good at making boys.

I don’t mind hearing stories about people’s family planning.  I actually think it’s really interesting.  But that person is not me.  If your sister wanted to have eight kids because she really wanted a girl, that’s awesome!  I grew up with eleven brothers and sisters and DO NOT want a super large family.  Four (or maybe five or six if God ever leads us to foster care/adoption) is more than enough for me…  Yes, even if they’re all boys.

Did You Want All Boys?

Honestly, in my dream world, I would have had two boys and two girls.  I had their names picked out and everything.  When we found out Daniel was a boy, my grieving didn’t center around the fact that I was having another boy.  I was pumped about that.  What I had to grieve was the loss of my second girl, Elizabeth Grace.  Since we want four kids, even if we end up with a girl as our last little one, we won’t have our Elizabeth.  Asking what I wanted is hard because it reminds me of the loss (albeit, a small loss for me) of what I had envisioned my family looking like.

You’re in for it, Boys Have So Much Energy!

Not helpful.  I’m having three boys.  That’s a fact.  Making me worry about their energy level doesn’t help anything.

You’re Lucky, Boys are So Much Easier Than Girls

This is the other end of the spectrum from the one before.  I do realize that, in a lot of ways, boys are easier than girls…  Especially in the teenage years.  I have five younger sisters.  I know what teenage girls are like.  Even so, the craziness is something I would love to experience firsthand.  I would love to take my preschool daughter to get her first pedicure, talk my middle school daughter through all the drama of life, help my teenage daughter get ready for her first dance, see my husband walk my grown daughter down the aisle at her wedding.  Maybe I won’t get those experiences and I’m ok with that, but don’t tell me I’m lucky for what I don’t have.

Once again, stories are fun and interesting and I love hearing them.  Just don’t compare them to my situation.  I actually have a friend who is due a month after me and she thought she was expecting another baby boy – also her third – until a second ultrasound discovered the first was showing an umbilical cord, not a penis!  I could be super jealous of her change in gender or I could wish that her story was my story.  Instead, I’m just choosing to be excited for her story while remaining excited for my story.  Both of us are having much longed for third babies and we couldn’t be happier!

I’m So Sorry You’re Pregnant with a Third Boy

Please, please, please don’t say you’re sorry!  This one is the worst.  Babies should be celebrated, regardless of the gender!  Saying you’re sorry belittles the precious baby that is coming and it makes me sad.

How Are You Feeling About Having Another Boy?

Pretty simple, huh?  When you find out someone is pregnant with boy number three, a simple congratulations is the perfect thing to say!

Your Turn:
Are you a one gender family?
What did you hear while pregnant that wasn’t helpful?

Next Up: The Six Worst Things to Say to a Mom of Young Kids