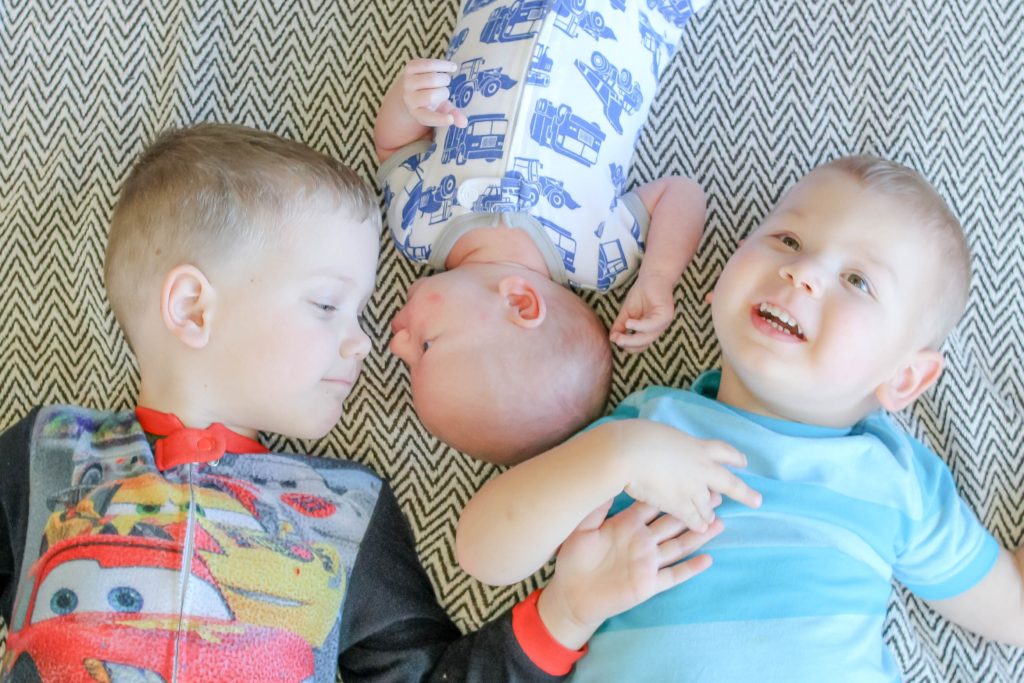 One Month at a Glance {Daniel} 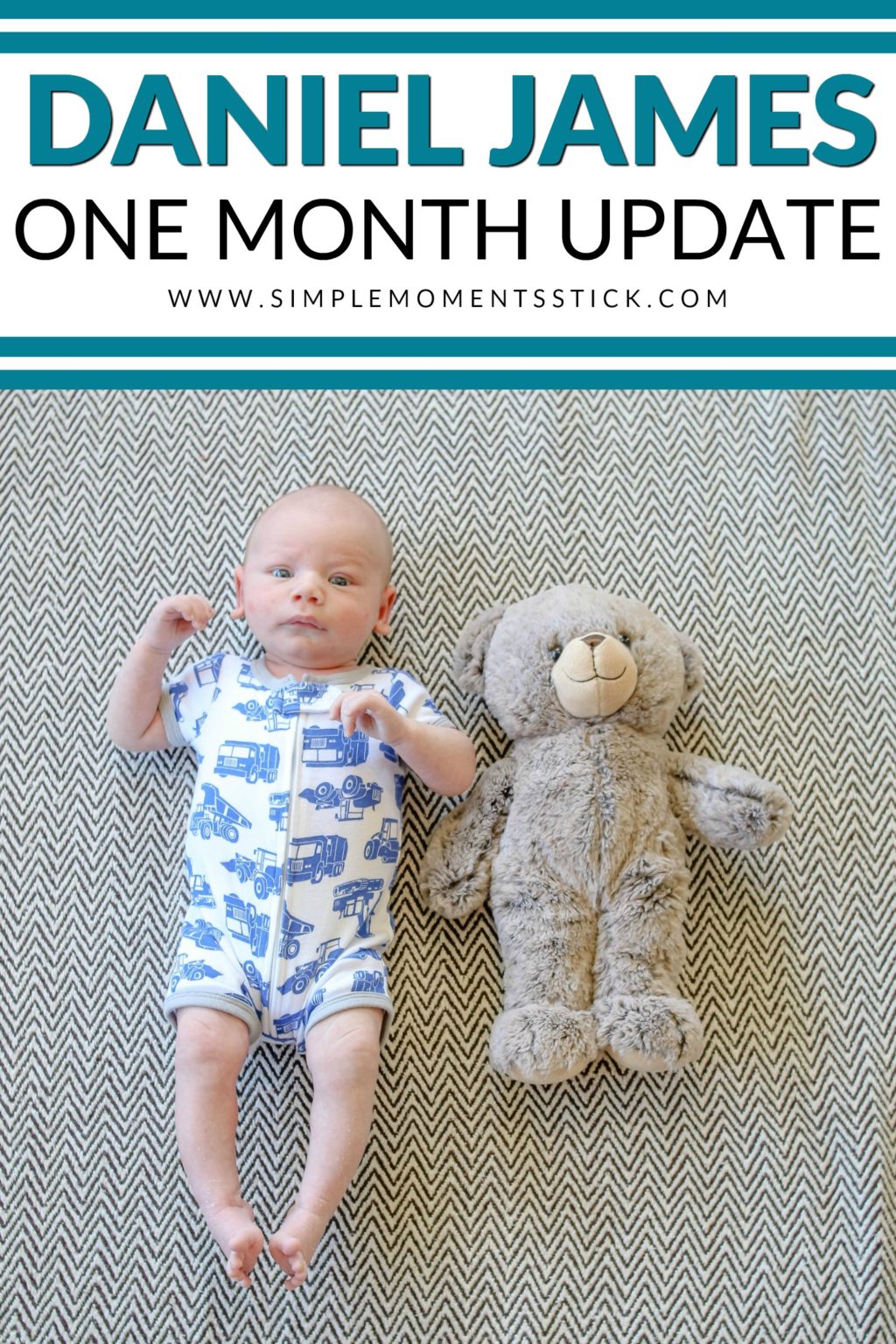 Back in the good old day of blogging, baby’s monthly updates were a big deal.  Every mama shared her little ones’ lives with her followers and I was no different.  Four and a half years ago I shared all about Caleb’s first year of life and it was so fun to have everything written down and documented…  Especially since I’m horrible about baby books.  Even though sharing baby monthly updates isn’t really a thing anymore, I’m choosing to continue sharing my boys’ development and milestones for the first year of their lives.  #IDoWhatIWant  I hope at least someone finds this interesting!

Daniel is simply the sweetest little guy.  He sleeps basically all the time – like a normal month old person – but, when he’s awake, he’s always looking around.  It seems like he’s trying to figure out the world already.  Like all my other boys did, Daniel has great head strength already.  I guess that’s what happens when I make giant babies.  😉

Daniel is the first of my babies to accept a pacifier which I’m way excited about!  It’s great to be able to sooth my little man with that rather than bouncing him on a yoga ball like we had to with Caleb.

We’re still working on the eating department since little man is a super lazy eater.  He’d love to be able to snack all day but mama would definitely prefer him eating big feedings and being done for a few hours.  Since he was sick the first few weeks of his life it’s understandable that his priority wasn’t getting good feedings but, now that he’s better, he’s starting to get a hang of eating well. Although we really want to get Daniel on a bottle so I can have a few breaks from breastfeeding when necessary, we haven’t started offering it because we want to make sure he really gets good at nursing first.

Like with Josiah, the first ten days or so were really painful while Daniel would latch on.  This time I was prepared with nipple cream and ways to get him to latch better so we got through the painful experience without too much angst.

Once upon a time I wanted a baby who favored me and not his daddy and I finally got it…  And now I’m regretting that desire.  Caleb ALWAYS was a daddy’s boy and it wasn’t long before Nate was Josiah’s favorite person too.  Daniel, on the other hand, only likes mama.  Nate’s been able to hold him maybe seven times in this first month of his life!  I’m just waiting for the day that all changes and Nate becomes Danny’s favorite too.  It’s bound to happen!

The big boys are simply enamored with their baby brother.  They both love giving their brother kisses, holding him, waking him up…  You know, all the things.  Caleb is constantly asking me questions about what Daniel thinks.  “Does Danny like watching me, mommy?”  “Is Danny happy to be in our family?” And on and on and on.  At least Caleb truly is gentle and helpful.  On the other side of things, I have to watch Josiah like a hawk because he’s always wanting to be wherever Danny is and has no understanding of what it means to be gentle or quiet.  Thankfully Danny is taking it like a champ and apparently doesn’t mind his crazy big brothers.  The three of them are definitely going to be best friends!

Apparently the more kids we have the easier they get.  Daniel is definitely our easiest baby so far!  That means number four will basically be perfect, right?  Daniel’s easy going-ness definitely makes up for his brothers going CRAZY this month with the transition.  I swear, these boys acted as though they never had rules in their lives.  Thankfully things are finally getting back to normal and the big boys are getting back to their sweet, somewhat obedient selves.

Like a normal one month old, the only communication is crying.  Thankfully he doesn’t cry all that often and I’m more than ok with that!

After his crazy birth, Daniel had a little trouble getting warm.  That can be a big deal so we spent the first hour or so cuddled up together under warm blankets and, thankfully, his body figured out how to regulate itself and everything was fine.  I certainly didn’t mind snuggling with my newborn for an hour!

Just like Josiah, Daniel’s little feet curl up under him in a weird, potentially concerning way.  Since I had taken Josiah up to Seattle to meet with a pediatric orthopedic surgeon and had been told by him why Josiah’s feet weren’t actually concerning, I was able to see if Danny’s feet were the same and, thankfully, they are.  They have already started straightening out on their own and eventually they will be normal.  That’s what I get for having 9+ pound babies crammed into my short torso body.

Unfortunately, my big boys got pink eye, colds, and Josiah got an ear infection in the first week of Danny’s life.  As hard as we tried to keep the germs away from our newborn, Daniel got sick.  After about a week of him having a runny nose and yucky cough I took him into the pediatrician to make sure everything was fine.  They checked him for RSV and a few other respiratory sicknesses and everything came back fine.  Like I thought, he just had a normal cold but it was so good to double check.  After about another week Daniel was basically back to normal.  It was absolutely heartbreaking to see my itty bitty baby sick but I’m thankful it was only a cold.

Most nights Daniel is a great sleeper.  He goes down for the night around ten, wakes up around 3:30 and 6:30 and then wakes up for his morning wake time around 8.  He typically does have to be nursed or gently bounced to sleep but occasionally he’ll fall asleep on his own.  I’m trying so hard to encourage that because it’s obviously a great skill for babies to have. 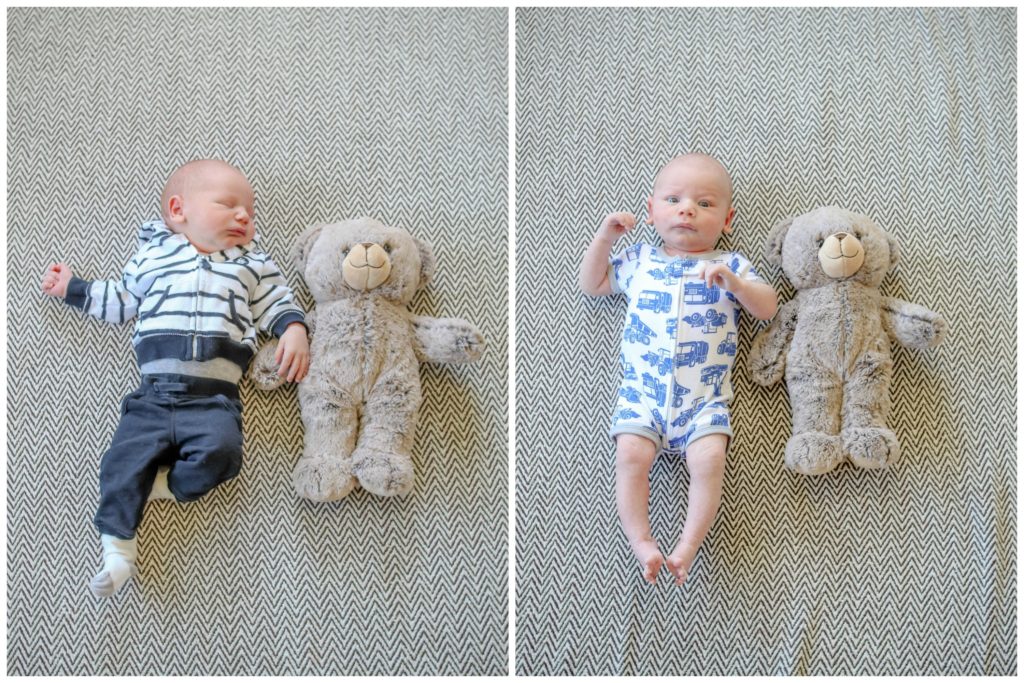