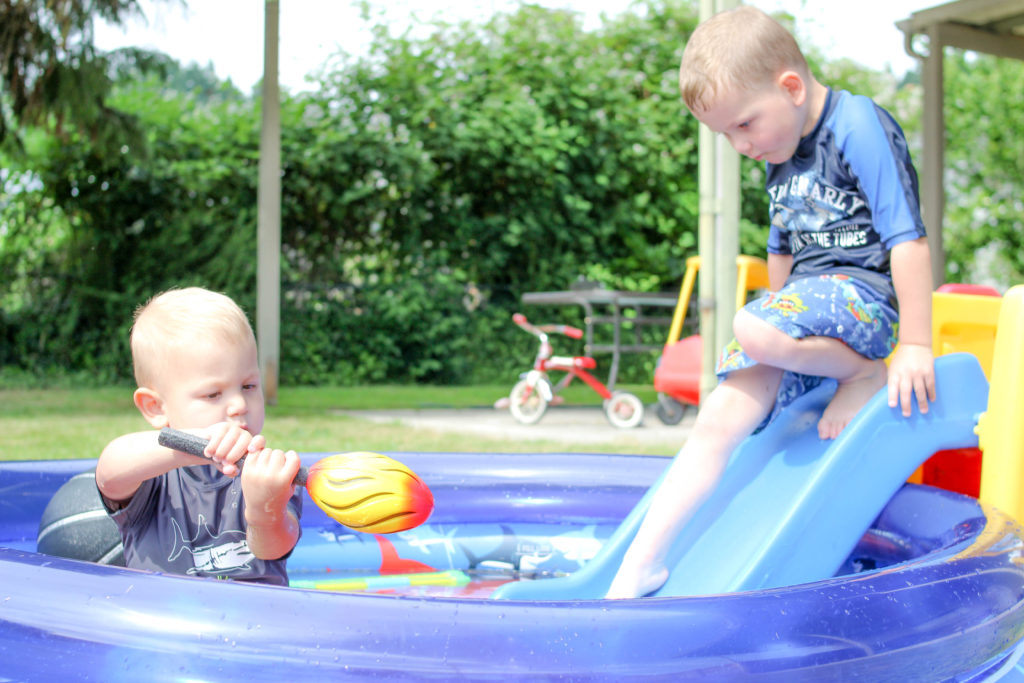 Find out six things not to say to a mom of young kids.  It’s easy to slip out one of these statements is you’re talking to a mom with young children but please stop! There’s something about conceiving a child (or foster/adopting) that all of a sudden makes your life fair game for everyone to comment on a critique.  Questions are asked that just aren’t ok and opinions are given that were never asked for.  Personal space disappears and everyone is in your business.

Now that I have three boys, I have heard all the cliche statements time and time again.  I’ve realized that maybe people just don’t realize that they’re saying things that shouldn’t be said!  Since I want to give everyone the benefit of the doubt, here’s a handy little cheat sheet of six things not to say to a mom of young kids. This Too Shall Pass

Let’s start with the one that annoys me the most.  “This Too Shall Pass”  Augh.  Just typing it out frustrates me.  First off, saying “this too shall pass” to a mom of young children just sounds so pretentious.  It puts you in a place above the person you’re talking to and makes you sound superior.  Beyond that, it’s just not helpful.  When I’m in the middle of a frustrating season, hearing “this too shall pass” just makes it feel as though I should be ok with what’s going on since it’s not going to be this way forever.  I’m well aware that it’s not going to be this way forever.  That doesn’t make what’s happening any easier.

The other day my family was at Northwest Trek for the afternoon.  It wasn’t the best choice of days to go because we were in the middle of VBS week and the boys were tired.  We drove during nap time so Josiah didn’t get as good of a nap as he usually would.  About half was through the tram ride, Josiah started freaking out because we weren’t letting him hang his body out the window.  He was arching his back and screaming – obviously annoying everyone else in the tram.  Right about then Daniel decided he needed a nap too but I was having to move around to keep the toddler from falling out the window and couldn’t sit still enough for the baby to fall asleep.  Every time I moved, the baby cried.  Caleb was trying to see the animals but we had chosen the wrong side of the tram and he was pretty much climbing over people to look out the window.  It was chaos and I felt so bad!

As I was sighing with exasperation, the lady sitting across from me who had three kids, each about two years older than my boys, smiled and said “It gets easier, I promise.”  Yes, what she said has the same meaning as “this too shall pass” but instead of sounding condescending it sounded relational.  She met me where I was at and promised me that life was going to get easier instead of standing above me and speaking down to me. Ok, friends, let’s talk about this for a second… Does anyone enjoy every minute of every day of their lives?  No?  Ok, then why  are we telling moms that they should be doing that?  This is definitely one of the things not to say to a mom! It Goes By So Fast No.  The answer is always no.  None of my boys sleep through the night.  Reminding me of my lack of sleep only makes it worse.  Stop saying this to moms of young kids. Up until having Daniel I had heard about all the unsolicited “advice” moms of young children get from people they don’t know but I had only experienced it once when someone questioned me about Caleb not wearing shoes…  In the summertime…  On a sensory playground that doesn’t get hot.

Since having Daniel, though, I’ve experienced it so much more!  Someone told me I was cutting off circulation to Daniel’s feet when he was in the sling. (I wasn’t)  Someone else told me I should have socks on Daniel.  (It was 80 degrees out)  Someone else told me patting Daniel to get him to fall asleep wouldn’t help.  (And he fell asleep about 26 seconds after she told me that)  I’ve been shocked by the opinions people have and the fact that they tell me!

Now, I totally get it that people want to help, especially if they think something might hurt the child (like the lady concerned that Daniel’s feet weren’t getting proper blood flow) but asking questions is so much better than jumping into a solution.  If that lady had asked me if I noticed that Daniel’s feet were a little blue I could have told her that it often happened since he was a newborn who’s circulatory system is still immature and that I had talked to the doctor about it already.  Instead, she made me feel like a bad mom AND she mentioned it three separate times while I was trying to enjoy the Hand’s On Children’s Museum with my boys. You’re Doing the Best You Can

I’m not at all saying that the alternative is judging moms or telling them what they should do (see the last phrase I don’t like).  Instead, the alternative is being there for moms.  Sometimes moms need to be asked “How can I help?” instead of being told that they’re doing the best they can.  Sometimes moms do need a kick in the pants (from someone who loves them and is aware of what’s going on in life under the surface) and a reminder that they can do better.

Moms need tons of grace and need to be told they’re doing well but they also need honesty – both for their sake and their kids’ sake.

Your Turn:
If you’re a mom with young children, what do you wish people would stop saying to you?