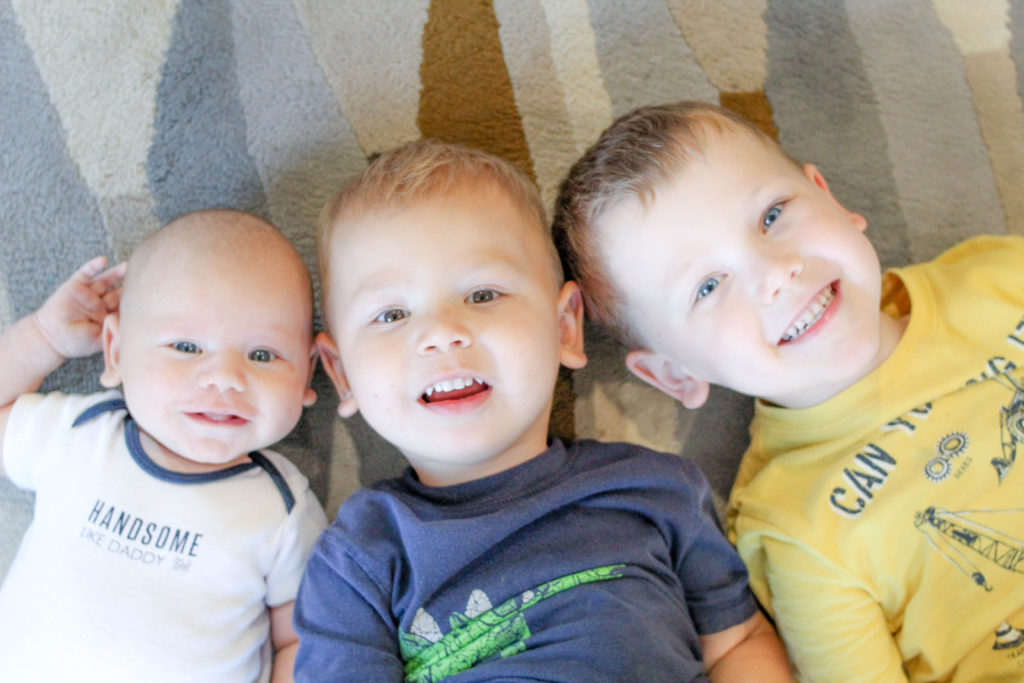 Two Months at a Glance {Daniel} 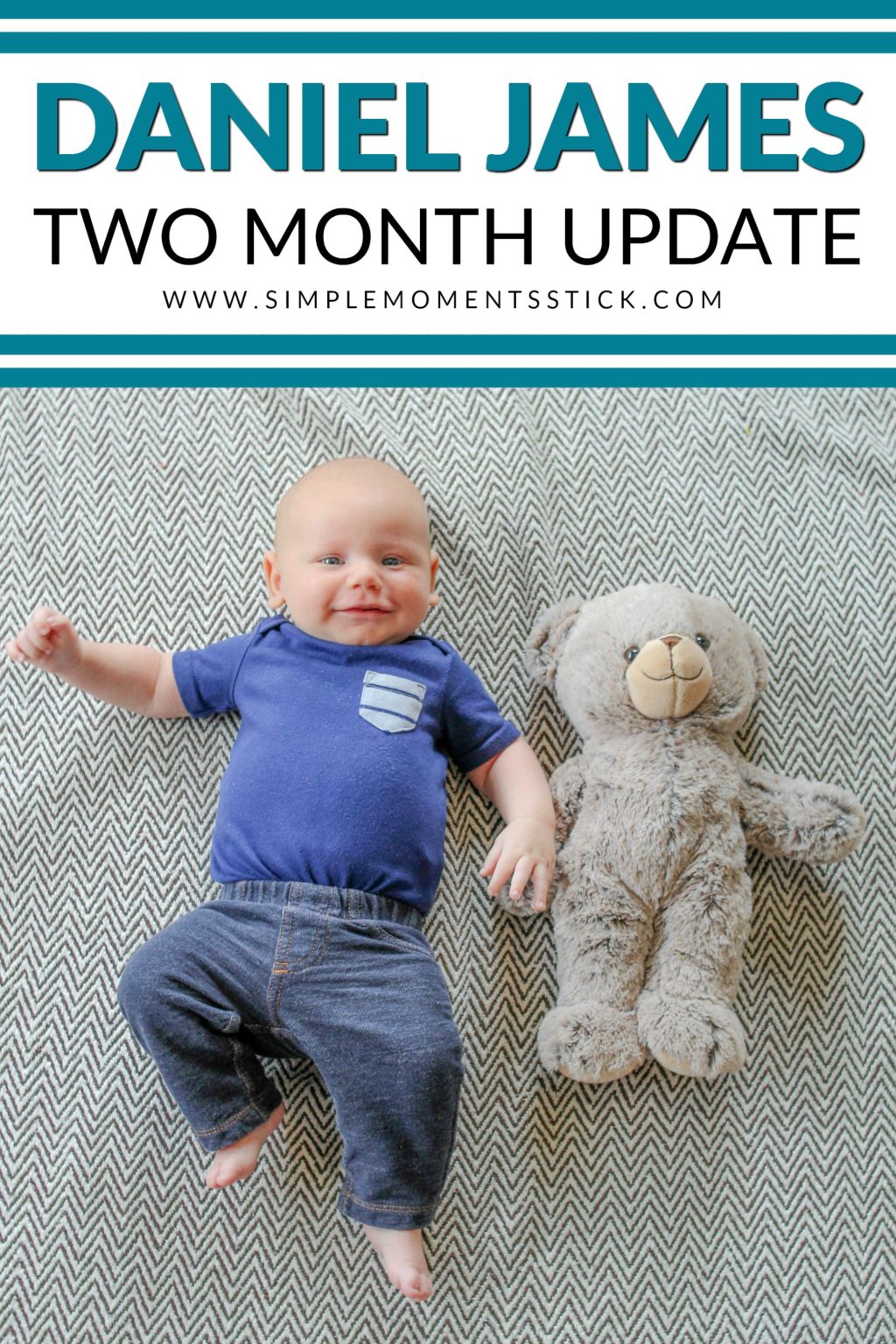 It seems like yesterday that I was sitting down to write up Daniel’s one month update and here I am already working on month number two.  I swear time is flying by about a million times quicker with this third baby.  It is such a joy to be a mama to three but it’s also the most exhausting thing I’ve ever done.  Everyone who said going from two to three is harder than one to two is absolutely right!

One of my all time favorite milestones of babies is when they start smiling and Daniel did not disappoint!  The first time he smiled up at me my heart melted in a little puddle!  Daniel smiles a ton and it’s the sweetest thing!  He also has started a little bit of babbling and Caleb is constantly asking what Daniel is talking about.  😉

At about 7 or 8 weeks, Daniel went through the typical second wonder week and “woke up” to the world.  He started really looking around and seems to truly see things now.  He also has figured out that he controls his arms and, although he doesn’t know what to do with them, loves waving them around intentionally.  He still has great head strength and is almost to the point where I could sit him in a bumbo.

Little man has decided he doesn’t really like pacifiers as much as we thought he might.  He’ll accept them but then spits them out if we’re not holding them in his mouth.  Since he’s a pretty happy baby most of the time it’s not a huge deal that he doesn’t like them.

If you can’t tell by the picture, Daniel has no problems eating.  He’s filling out quite well.  😉  I tell people that I make big babies and they only get bigger.  Danny likes eating after each nap and does a little bit of cluster feeding between 7:15 and 8:30 (his witching hour) before going to bed.  Earlier in the month he’d still wake up twice a night to eat but recently it’s been more like one time around 5am.  I’m certainly not complaining about that!

Daniel is definitely a mamas boy.  By this time both my other boys were all about their daddy but Daniel still is all about mama.  He lets Nate hold him more often these days but most of the time he’d rather have me holding him.  Thankfully, even though he doesn’t want other people holding him, he will smile at everyone.

Danny’s big brothers love him to pieces but he’s still not so sure about them.  Caleb loves holding Daniel and will get to do it for maybe three minutes before the baby starts fussing.  I try to make sure Caleb knows that it’s not that he’s doing something wrong – his brother just wants mama.  Josiah though…  Well…  Someone on Instagram described it best.  You know that episode on The Office where Stanley’s heart rate increases whenever Michael is around?  That’s how Daniel is with Josiah.  Jojo loves him SO MUCH and it’s just too much for little Danny.  Someday I’m sure they’ll be best friends but, for now, we try to keep Josiah away as much as possible.

Daniel is either hot or cold.  He’s such a happy, smiley, content baby…  until he isn’t.  Then he screams bloody murder.  It’s pretty hilarious and makes me curious to see what he’s going to be like as an older kid.

Danny boy is all about smiling and babbling.  He definitely lets us know what he does and doesn’t like.  Why is it that I make such opinionated children?

Thankfully all the sicknesses have cleared out in our household and this month Daniel was healthy!  Since it’s heartbreaking to see babies sick, I’m happy he’s healthy again.

Danny’s feet are also almost straightened out how they should be.  I’m thankful we didn’t have to take him up to Seattle like we did Josiah and that it really was just the way he was curled up while I was pregnant with him.

I don’t want to jinx it, but Daniel is the best sleeper I’ve had so far.  I know I said that at this stage with Josiah and then he turned into the worst sleeper of all time for a while.  Please, God, don’t let that happen again!  For a while this month Danny was waking twice a night to eat but now he’s down to typically waking up between 5 and 6 for his one night feeding.

We put him in his own room this month because he’s a noisy sleeper and he’s doing great.  Musical bedrooms is a thing in our home (we have six beds for five people… and Nate and I share a bed…).  During naptime Daniel sleeps in Nate’s and my room so Josiah can sleep in the nursery and Caleb can sleep in the big boy room.  We aren’t playing wake your brother up by sharing a room during nap time!

Don’t think that means I’m getting good sleep, though.  My bigger boys are becoming the worst sleepers of all time!  When we combined their rooms they started getting themselves so worked up before bed.  It got better for a while but now it’s back to being ridiculous.  We pushed up their bedtime to 7:30 so that they would hopefully be asleep by 8 or 8:30.  We also get woken up at least twice (but often 3+ times) by them for SO MANY REASONS.  We’re working hard on being gentle but firm and hoping they catch on that they’re supposed to sleep all night.  I’m pretty certain that, once they’re teenagers, I’m going to hide alarm clocks in their rooms and set them off multiple times a night to show them how they affected Nate and me when they were preschoolers and toddlers.  😉 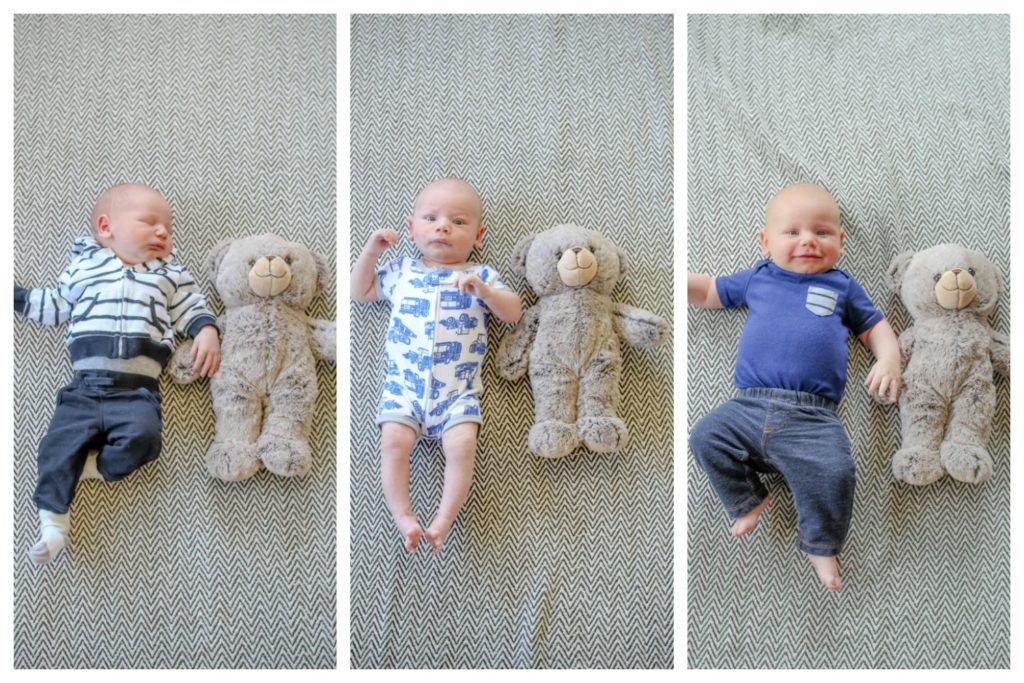