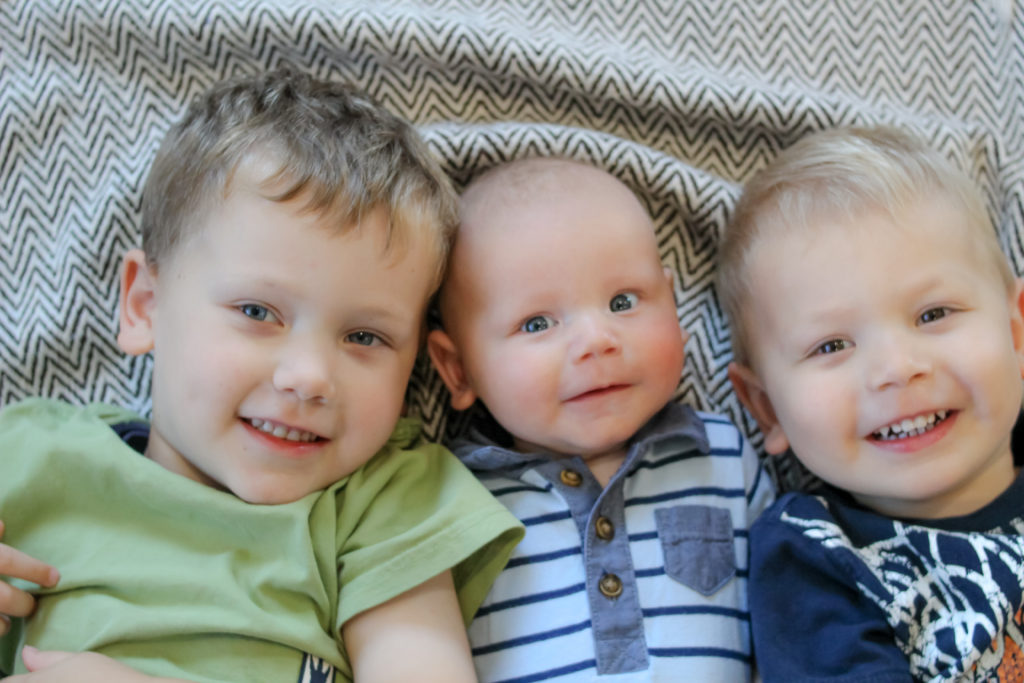 Three Months at a Glance {Daniel} 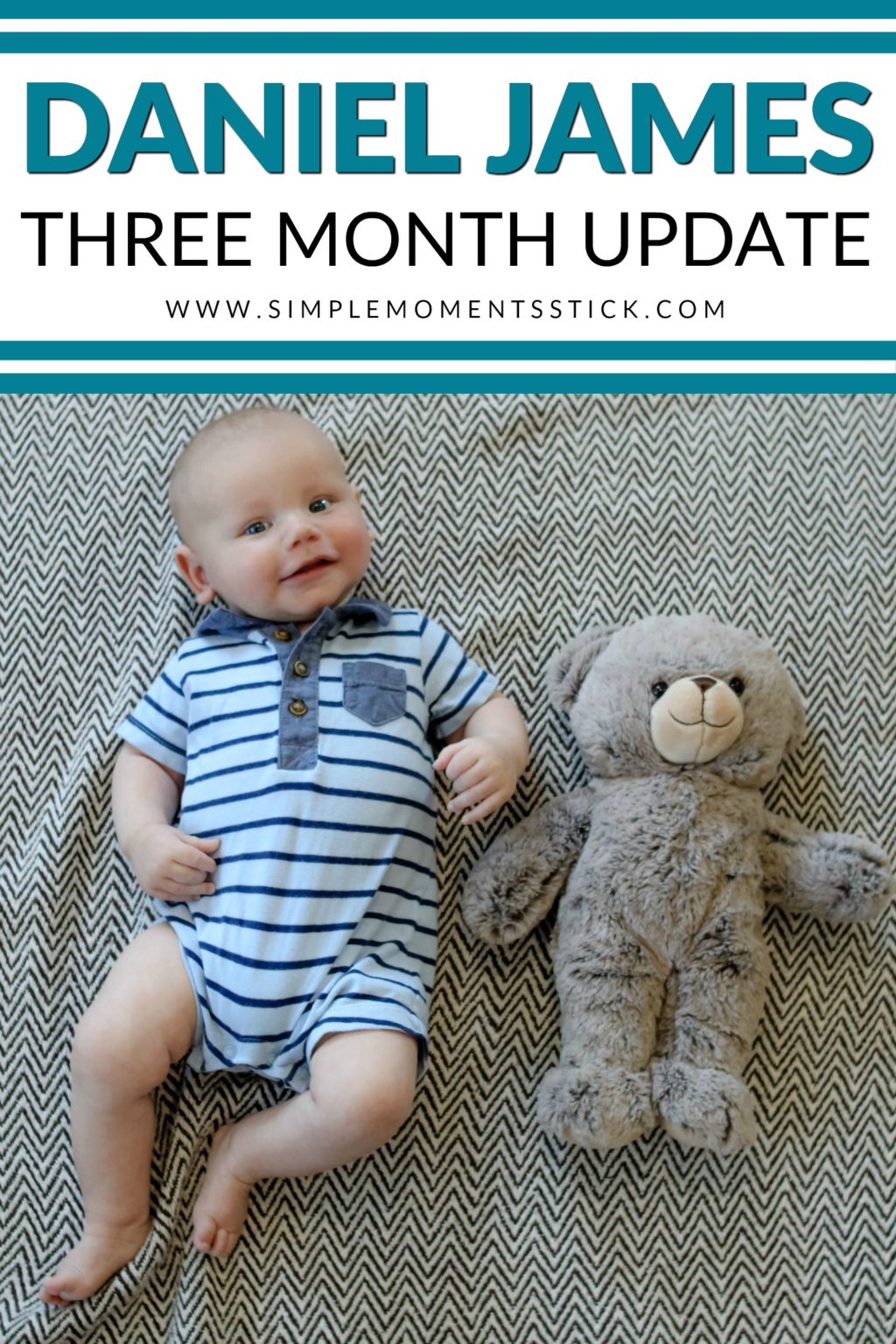 Not a lot of big changes happened during month three of Daniel’s life.  He continued waking up to the world more and is honestly the sweetest little baby.  Since his two brothers give us a run for our money, it’s nice having a little person in our house that is sweet, happy, and content.  Let’s hope it stays that way.

Daniel did go through wonder week three this month and again I was concerned that he had finally decided that crankiness needed to be his way of life but, thankfully, after he got through his leap he was back to his smiley, easy going self.  He still babbles away and smiles at everyone!

We were crazy busy this month with vacation at some friends’ mountain cabin, VBS at church that Nate and I helped out at, multiple day trips, and other events that upset nap time.  Thankfully he’s so easy going that he just sleeps when he’s able and goes with the flow when he’s not.  Daniel is basically the perfect third child.

Daniel still nurses like a champ!  I’m so thankful that he finally decided he doesn’t need to cluster feed before going to bed because that allows me so much more freedom in the evenings.  He still wakes up once a night to eat, between 4 and 6 am and I’m here for it!

We’re working hard to get Daniel to be our first baby who takes a bottle.  I would love to feel confident being able to leave him for a few hours and know he’ll still eat.  Also, since Nate and I are wanting to leave him with his grandparents for two nights in early October while we attend a wedding, being on a bottle is a must!  Nate or I try to give him a bottle of pumped milk once a day and so far he’s not too much of a fan.  He’ll yell at us for quite a while and then finally decide he’s ok with the bottle and drink it down.  I’m hoping he learns that the yelling before giving in isn’t necessary.

Daniel is still all about mama.  He will let Nate hold him for ten minutes or so at a time and then will start yelling for me.  As soon as I take him back he calmly cuddles into me and is happy.  It’s a fun party trick and makes everyone laugh!  Even more amusing, though, is that he’s starting to like some other people too.  There’s no rhyme or reason for who he decides is allowed to hold him but I’m happy to get the reprieve.

Even though Daniel is picky about who holds him, he is not at all picky about who he’ll smile at.  Any time anyone makes any sort of eye contact with him or engages with him at all he gets a huge grin on his face and does a little smile laugh.  It’s absolutely adorable and everyone else loves it too!

Thankfully Josiah doesn’t stress Daniel out as much when he’s around but Daniel is still not a huge fan of him.  Jojo is all about the love and cuddles, and kisses and Daniel doesn’t know what to do about it.  Caleb is much more gentle and Daniel puts up with Caleb for longer and longer amounts of time.  Caleb tells people that Daniel likes him and mommy and doesn’t like Jojo and daddy.  It’s pretty hilarious!

Although Daniel still runs emotionally hot and cold, it’s become much more understandable.  The moment he gets hungry or tired he starts crying.  Otherwise he’s happy.  It’s nice to be able to trouble shoot his crying so easily since it’s usually one of those two things.  When Daniel is happy, though, he is HAPPY!  He adores smiling, giggling, kicking around, and babbling and it makes my heart so happy!

Crying, smiling, giggling, babbling…  He’s still all about all of it.

Danny hasn’t been sick at all this month and we’re loving the summer time healthiness!

I love that Daniel is still sleeping really well.  He’s typically in bed around 8, wakes up between 4 and 6 to eat and sleeps again until 8:30 or so.  I’m not looking forward to the four month sleep regression and am praying it doesn’t mess him up too badly!

We’re still living the musical bedrooms life.  Daniel sleeps in his nursery at night time and typically takes two of his naps in there.  His other typically two naps are in Nate’s and my room while Josiah is sleeping in the nursery and Caleb is sleeping in the big boy room.  Sharing rooms during nap time just doesn’t work in our home and I’m all about making sure everyone gets as much sleep as they can.

Since we’ve been out and about so much this month, it’s been great that Daniel is good at sleeping where ever we are.  In fact, while we were staying at a cabin for vacation, we planned our pool time during Danny’s long nap and he slept in his car seat (with us keeping a close eye on him) for the 2+ hours a day that we spent at the pool.  He also sleeps in the sling wonderfully so we do a lot of sling naps while we’re out and about too.