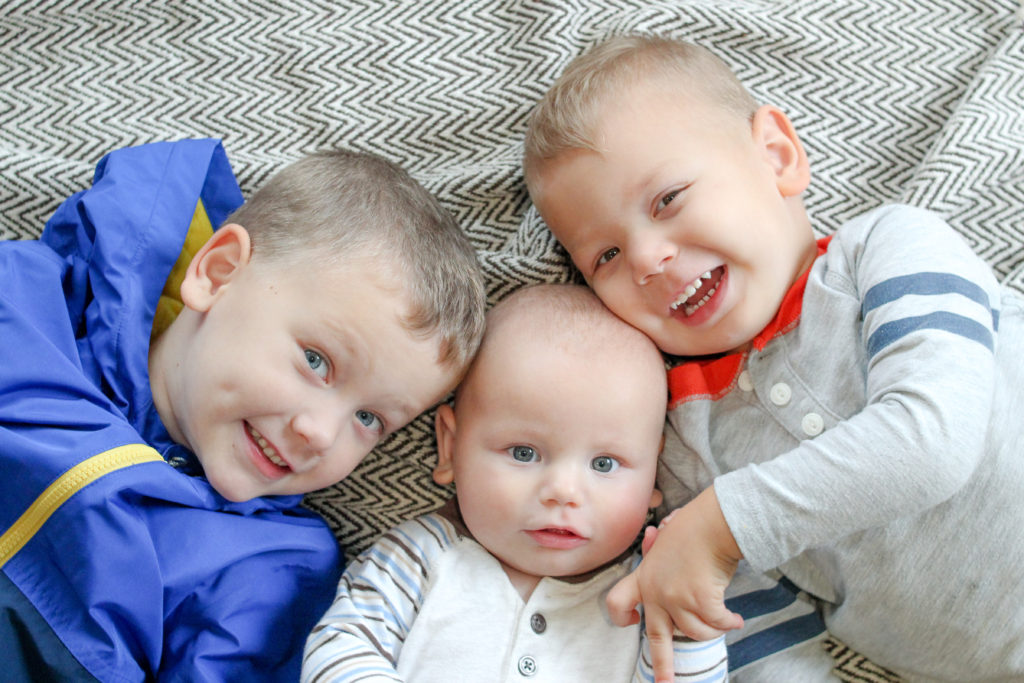 Five Months at a Glance {Daniel} 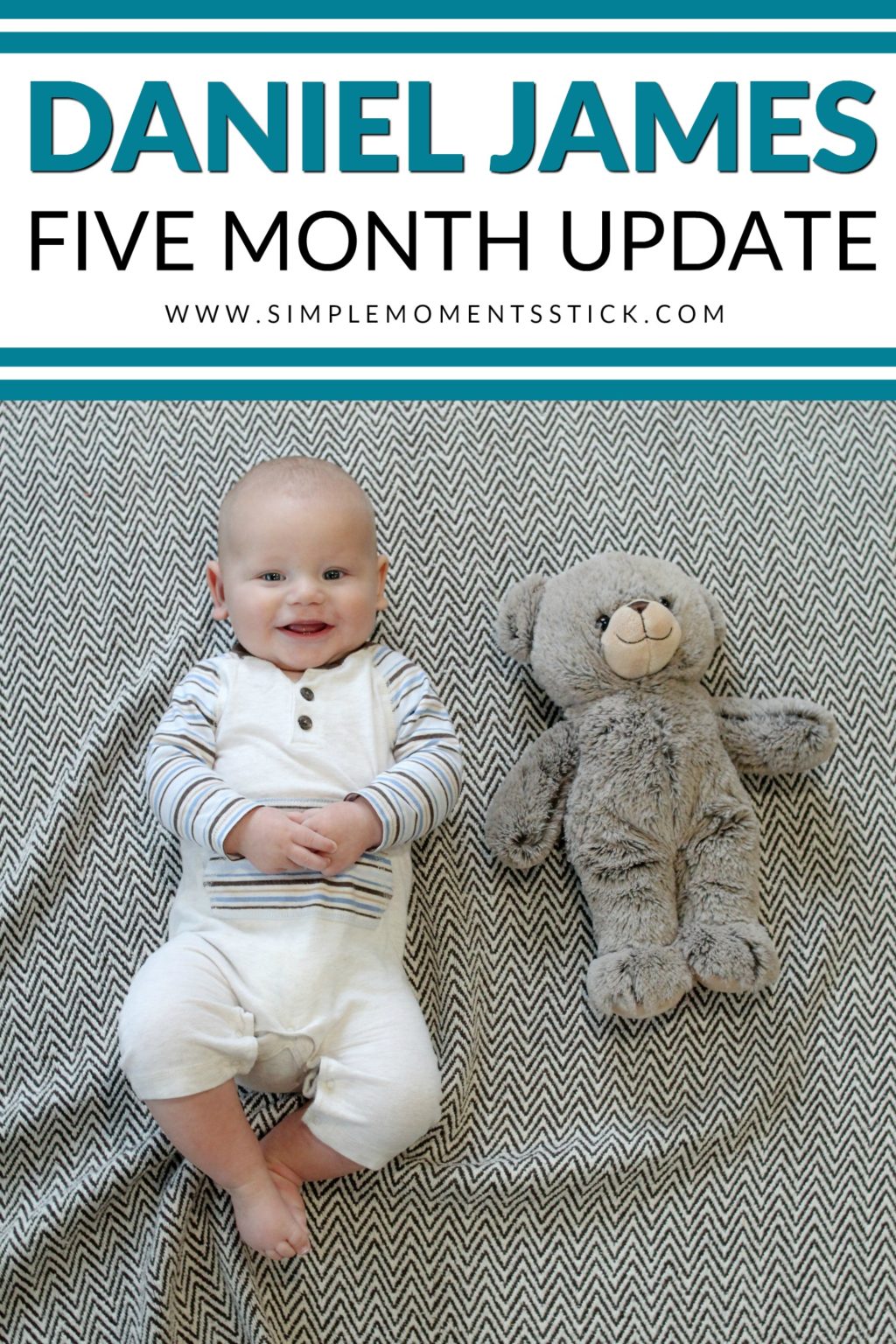 I’m thinking Daniel’s birth story is going to be indicative of how he lives his life – hurry up and wait and then BOOM, all the things happen.  He really hasn’t had many milestones this month.  He did finally roll over for the first time on the 21st – just days before his five month birthday but realized that it was a bad idea and quickly rolled himself back over…  And he hasn’t tried to do it again.  He’s constantly rolling himself onto his side but has no desire to go further.

Thankfully Daniel has great muscle tone so we know it’s not that he isn’t able to do things…  He just doesn’t try.  Gotta love all the different personalities of my kids.  He’s already showing that he’s not much like either of his older brothers.

Daniel is working on getting a few teeth so he’s chewing on EVERYTHING!  He loves grabbing at things and putting them in his mouth.  He especially loves chewing on people’s hands and we’re trying so hard to keep his big brothers’ hands out of his mouth because Heaven only knows where their hands have been.

Well, Daniel decided to backslide a little more than we’d like (dang four month sleep regression) so we decided we’re going to take him with us to Portland for the wedding weekend and not subject Nate’s parents to watching him for two days.  That being said, we’ve slacked a little on making sure Danny’s been getting a bottle.  It really is just easier to nurse him.

Little man has begun being awake during dinner time so we’ve been having fun propping him in his bumbo while we eat dinner.  He’s not too interested in the fact that we’re eating yet but he’s definitely having fun being a part of our family dinner.  Won’t be long before he’s joining us and actually eating!

Daniel is really starting to know people and responds so well to both Nate and me (although I’m still totally his favorite).  He’s a little ambiguous to Caleb and is back to not really being a fan of Josiah.  I really don’t blame him because Josiah is an obnoxious two year old.  😉  Both of the big boys still adore their baby brother.

Danny boy still smiles at everyone and loves chattering away.  He truly thinks he’s communicating with us.  He’s so sweet and everyone who comes in contact with him just adores him.

Pretty sure hot or cold is just going to be Daniel’s theme in life.  He’s either super happy, smiley, and giggly or he’s a terror.  If he turns into his monster self we know he needs to either be put to bed or fed and he’s good to go again.  I’m truly thankful this kid is easy.  I don’t know what I’d do if my third was psycho.  (And now that I’ve said that I’m going to get a psycho fourth child.  Haha)

Like I said before, Daniel is quite the babbler.  He chatters so much and loves it when people talk to him.  He’s started learning that we’ll make Josiah leave him alone if he yells when Jojo comes near him and he’s starting to use that to his full advantage.  😉

Thankfully Daniel is staying healthy and happy!  No injuries or sicknesses to report this month.  We are still waiting to hear back from the specialist we saw but we’re hopeful for good results.

Four month sleep regression time!  Thankfully is wasn’t too bad with Mr. Daniel.  He still sleeps about 7:30pm-7 and started waking up twice a night instead of once a night.  Thankfully that settled back into once a night and it’s stayed that way.

Naps have definitely gotten harder.  He needs a lot of assistance falling asleep at nap time.  He has to be swaddled up, his pacifier needs to be in, and then he needs to be rocked/bounced until he falls asleep.  It typically takes 15-20 minutes for each nap.  Thankfully the big boys are able to occupy themselves well and know that it will be quicker if they don’t come in and bother me.  I’ve had to have some conversation with Caleb about what constitutes an emergency since he’s absolutely allowed to interrupt nap routine for an emergency.  Daniel is between three and four naps a day depending on how long they are and his longest nap still tends to overlap with his brothers’ naps.  I am here for that!

Napping in cars is officially not a thing.  He would rather scream than sleep in the car!  It’s such a bummer because both big boys are great car nappers and we’d often plan our adventures around that.  Thankfully Daniel WILL sleep in the baby carrier.  As long as he has his pacifier and is cuddled up with me he’ll fall asleep.  He doesn’t like being in the carrier while he’s awake so I ordered a forward facing carrier to see what he thinks about it.