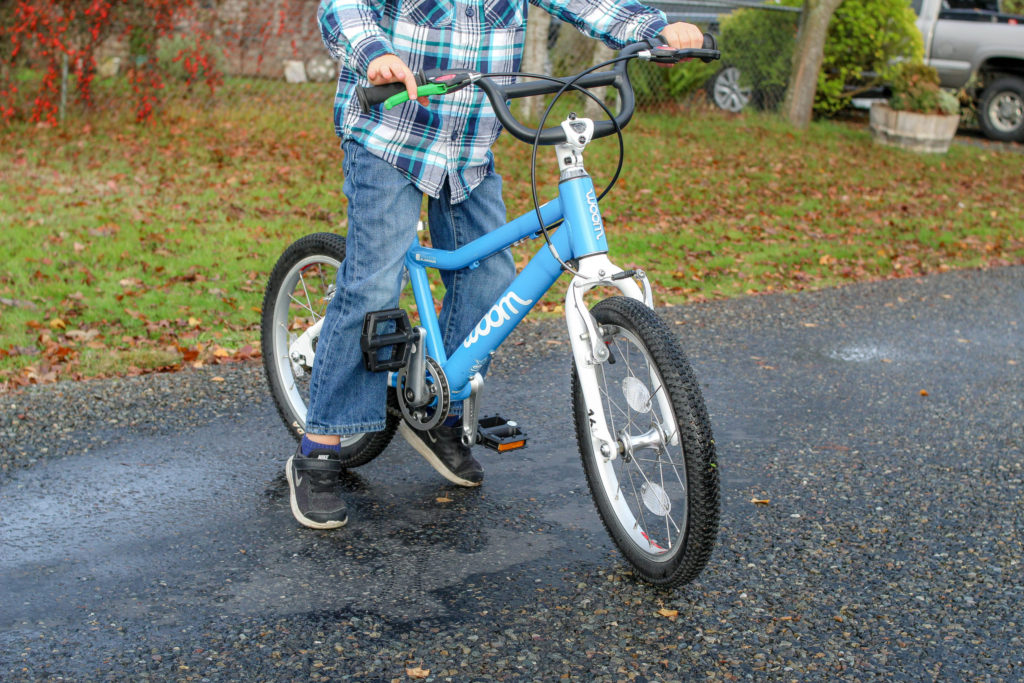 How I’m Learning to Let Go of Control

Caleb wanted to learn how to start riding a bike and I realized once again that my child is growing up.  Find out what riding a bike taught me about learning to let go of control.

I have a five year old.

My Child is Growing Up

I’ve been having a lot of these struggle moments with my oldest growing up in the past year.  There was when he asked for a big boy backpack (kindergarten is coming!), there was when he started asking ME questions about myself instead of being only self focused, there was when he taught his two year old brother how to hold the baby, and, for some reason the hardest of all, when Caleb learned to ride a bike.

Over the summer Caleb decided he really wanted to learn how to start riding a bike and it really sparked in my the idea that I needed to begin learning to let go of control.  I was sure he was too little and that he needed to keep his training wheels on for another year or so but my husband is more willing to let go than me so off the training wheels went.  After a few crashes (thankfully fewer than I expected!) Caleb was riding around like a pro.  And yes, I cried. Sidenote: We have two more boys and, after dealing with the difficulty of learning to balance once training wheels come off, we are set that we are going to start the others off with a balance bike.  It’s so much easier to learn how to pedal after already knowing how to balance than it is to do it the other way around.  Do yourselves a favor and learn from our mistake!  Get your toddler a balance bike!

My child is growing up and has gotten too big for his starter bike so, for his birthday, he received a Woom Bike.  His face lit up when he realized he was had a big kid bike and away he rode, yelling out “This is AWESOME!”  The Woom 3 is perfect for taking the next step in bike riding with its lightweight frame, color coded breaks, and long wheel base.  He looked like such a big kid as he rode off on this new bike and it reminded me once again that letting go matters.

I can’t hold onto his bike.  I can’t force him to slow down and ride only as fast as I can walk.  I have to watch as he zips away and trust that he’s going to be ok. Learning to Let Go of Control

I can be a little bit of a control freak.  I know the way my husband and I want to raise our boys and I struggle with anyone else potentially guiding them in what I believe is the wrong direction.  If I could have it my, way my children would never leave my sight and I would control their actions from now until eternity but I know that’s not practical and, even more importantly, not right.

I HAVE to let go. I am doing my part in raising him well.  As he learned to ride a bike I taught him not to cross the rode without a grown up.  When he asked how to start riding a bike I told him he had to always wear a helmet.  When he started wobbling I showed him how to look toward where he was going in order to ride straight.  I have to trust that he absorbed all my lessons.

Beyond just teaching him, I also set him up for success.  I got him a quality bike that has a low center of gravity and a stable, good-natured geometry that helps him further improve his riding skills.  I sent him off with the tools he needed to succeed.

In the same way, instead of stressing about letting go in life and refusing to allow him to grow up, I’m trusting the process.  I’m doing what I can to raise him right and trusting that he will continue to grow into a wonderful young man and will always remember the lessons he has learned.

I’m learning to let go as he rides off on his bike and learning to trust that it’s all going to be ok.

Your Turn:
When did you kid ask how to start riding a bike?
How are you learning to let go of control?

Check out Woom Bikes for yourself!  There are so many options and you’re sure to find the bike that’s just right for whatever stage of life your little one is in!