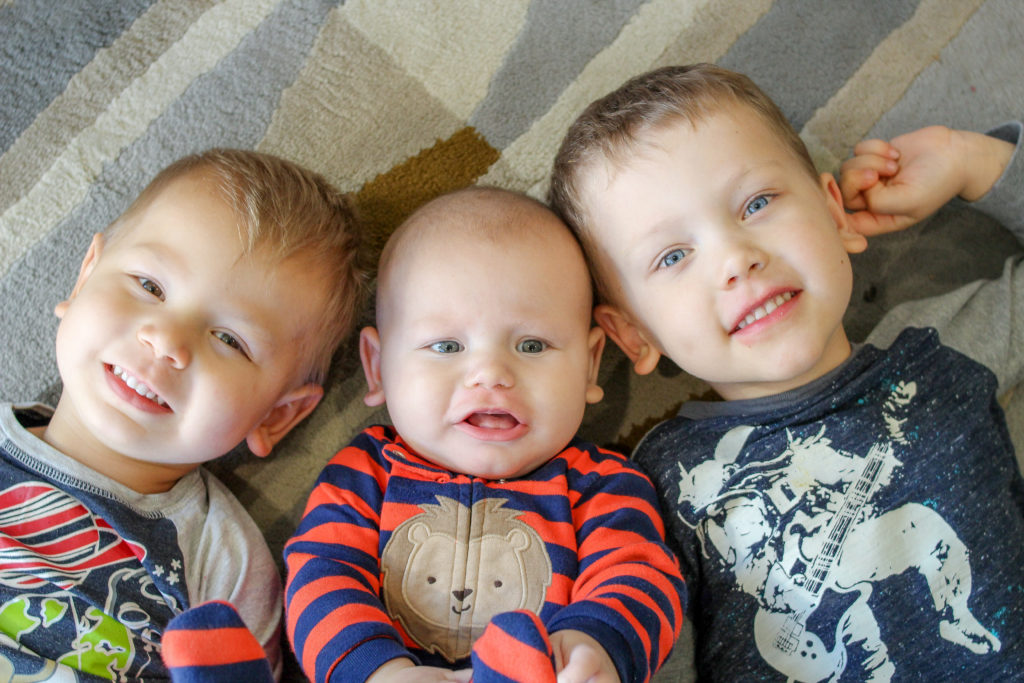 Six Months at a Glance {Daniel} 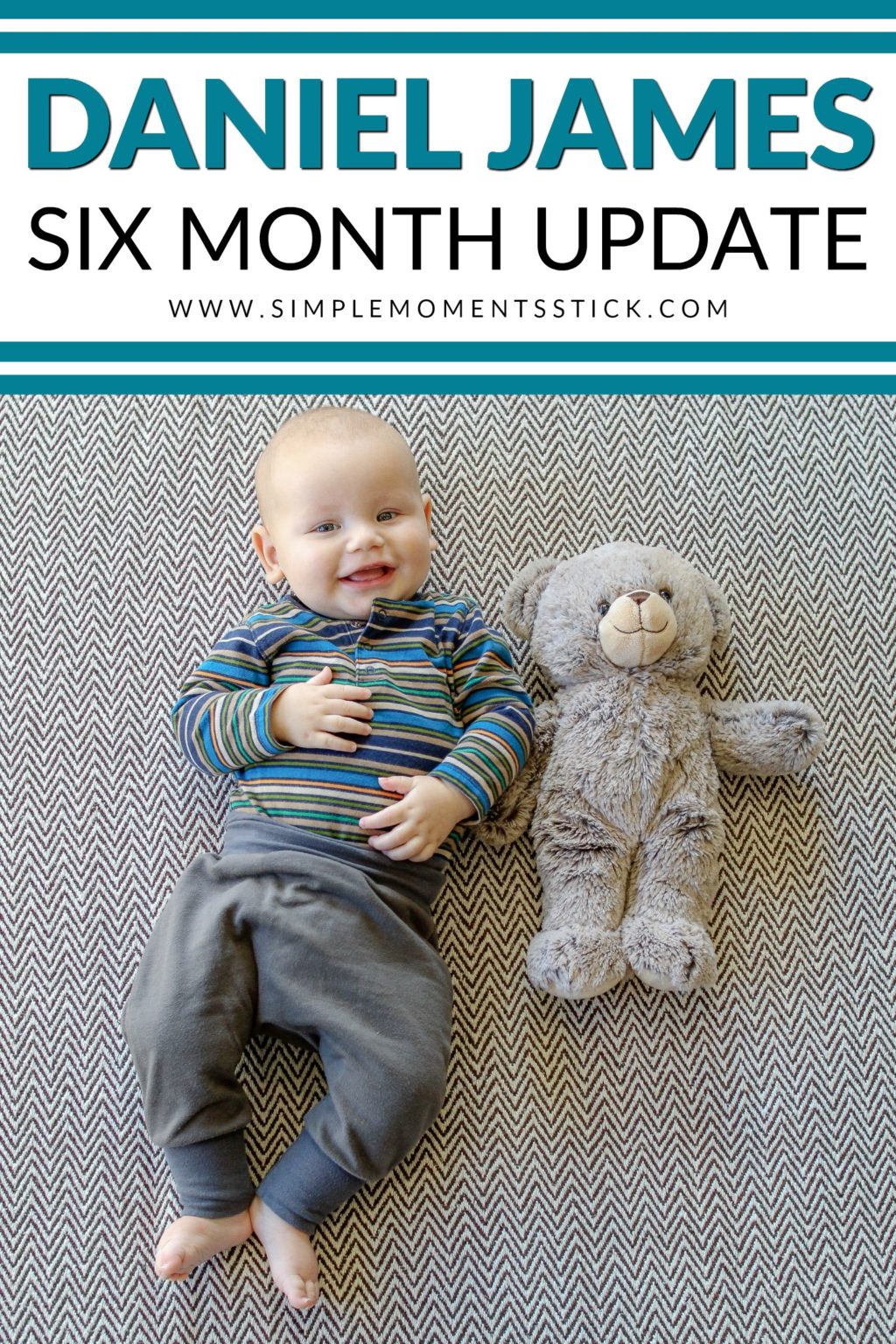 Can we all just agree that children are weird?  This month Daniel rolled over one more time…  and I’m pretty sure he was helped to do it by I can’t prove that.  So, he is now six months and has rolled over (maybe) two times.  He is definitely able to do it strength-wise and rolls onto his side and practically onto his belly all the time but he refuses to complete the roll.  I talked to the pediatrician about it at his six month appointment and was told that, since he HAD done it (even if it was only once) he’s fine and jut choosing not to.  It’s nice that he’s not rolling all over the place yet since his brothers are a little too into legos and spread them all over the house but I’d still like to see him progressing a little faster.

Even though he’s not rolling, he IS able to sit up on his own for a bit.  I have to set him their and get him balanced but then he can stay sitting on his own unless something distracts him.

Danny is teething like crazy and finally cut his first tooth on his six month birthday.  Because of teething – and because he’s a baby – Daniel puts EVERYTHING in his mouth.  I also put him in the nursery at church once this month.  He typically falls asleep during the service but one week the stars aligned and he was in the nursery for about half an hour.  He did great and Josiah HAD to help the teachers with him because Danny is HIS baby.

At the beginning of the month Nate and I went to a wedding of a friend from college.  We had hoped to leave him behind but ended up taking him.  Since Nate was in the wedding, I kept Danny with me and it definitely made for a different wedding experience.  To keep him quiet during the ceremony I had to nurse him and I felt SO BAD sitting next to this younger guy who definitely wasn’t expecting a nursing baby (yes, I was covered up) next to him.  He did great until probably nine or so and then fell apart so I had to leave the reception early…  Such is life.

All month Daniel has been more and more interested in watching us eat and chomps his jaws along with us so we were really excited to let him try food.  About a week before his six month birthday we gave him some avocado and he LOVED it!  He couldn’t get enough and would cry and cry whenever the spoon was taken to get more pieces put on it.  Since then, though, he hasn’t been too interested in trying food.  Little man loves nursing and is a champ at it so who needs real people food?

Even though we haven’t been trying so hard with the bottles since the wedding Daniel is pretty fine with taking them.  He’ll sometimes refuse a bottle if it has formula in it but he rarely refuses a bottle of breast milk.

Daniel is the sweetest little baby and smiles and chatters away to everyone.  He definitely prefers women and wants me over anyone else.  He loves smiling at Nate and looking at him but would love to do that while sitting on my lap at all times.  Everyone just adores our little man and I don’t blame them.  😉  Since he loves seeing the world, we got a forward facing baby carrier for Daniel and he is here for it!  He is so happy being able to face out and interact with everyone and then, when he’s tired, we turn him around and let him take a nap.

Caleb is such a good brother to Daniel and always wants to be near him.  A few times he’s rolled Danny onto his lap and gradually that has turned into (gentle) wrestling.  Danny loves it and giggles away so thankfully I haven’t had to nip that in the bud.  I definitely remind Caleb about how gentle he needs to be while he’s doing it!

I’ll be pretty happy if I always and forever say the same thing about his personality.  He’s a happy, content little guy who is fine laying around, chewing on his toes, and grinning at everyone.  He only fusses if he’s hungry, tired, or if Josiah is nearby.  😉

This month Daniel has really started giving kisses.  He pulls people’s faces toward him and slobbers all over them.  As gross as it is, that is always my favorite stage of my boys.  It’s awesome to get affection from my little one even if he really doesn’t know what he’s doing.

Daniel is also much more physically expressive about what he wants.  He grabbing for things super intentionally and knows what he does and doesn’t want.

Daniel has still been a healthy little boy and we’re incredibly thankful for that!  After about a month and a half wait we finally got the results from the specialist he saw and the results were good news and no further appointments are needed.  While I’m not willing to go into detail about that for my little one’s sake it’s an incredible relief and documenting it here is a reminder to me that God answers prayers!

After his four month sleep regression, Daniel is back to sleeping well.  At nights he’ll sleep from about 7:30 to 7 and will typically wake up once to nurse.  No complaints there!  He falls asleep on his own after I nurse him so thankfully I don’t need to rock him at bedtime to get him to sleep.

Daniel is officially down to three naps a day.  He typically needs help getting to sleep so we’ll rock him with his pacifier in his mouth and it usually takes about ten minutes per nap.  Unfortunately Josiah is getting to be a bit of a stinker during naps and has gotten into way too much trouble while I’m away.  The worst thing so far is that he broke my camera lens (hello unexpected $90 expense to replace it) and we’ve had quite the conversations and discipline about being good while mommy is helping baby.  I’ve also had lots of conversations with Caleb about how it’s ok to come in and tell me if Josiah is doing something he really, really shouldn’t be doing.

We had previously thought that Daniel couldn’t sleep in the car but we’ve realized that he will if I put my phone next to him with the white noise going and hold his pacifier in his mouth for him until he falls asleep.  It’s pretty ridiculous but, hey, it works, so I’m not totally complaining. 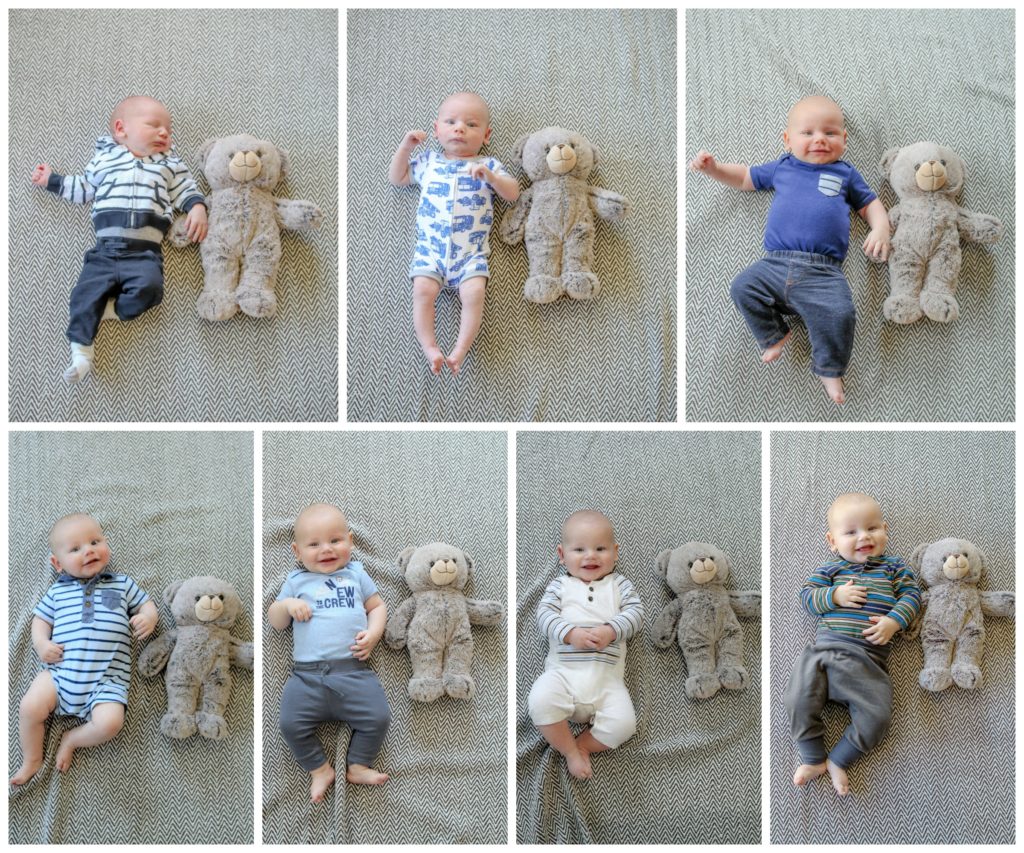