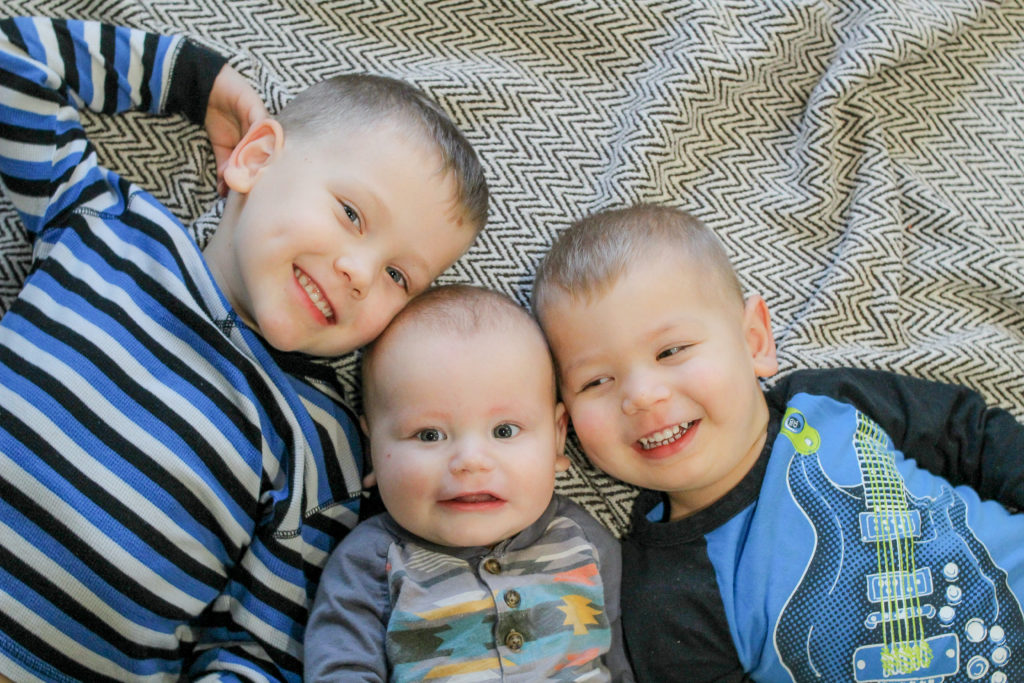 Seven Months at a Glance {Daniel} 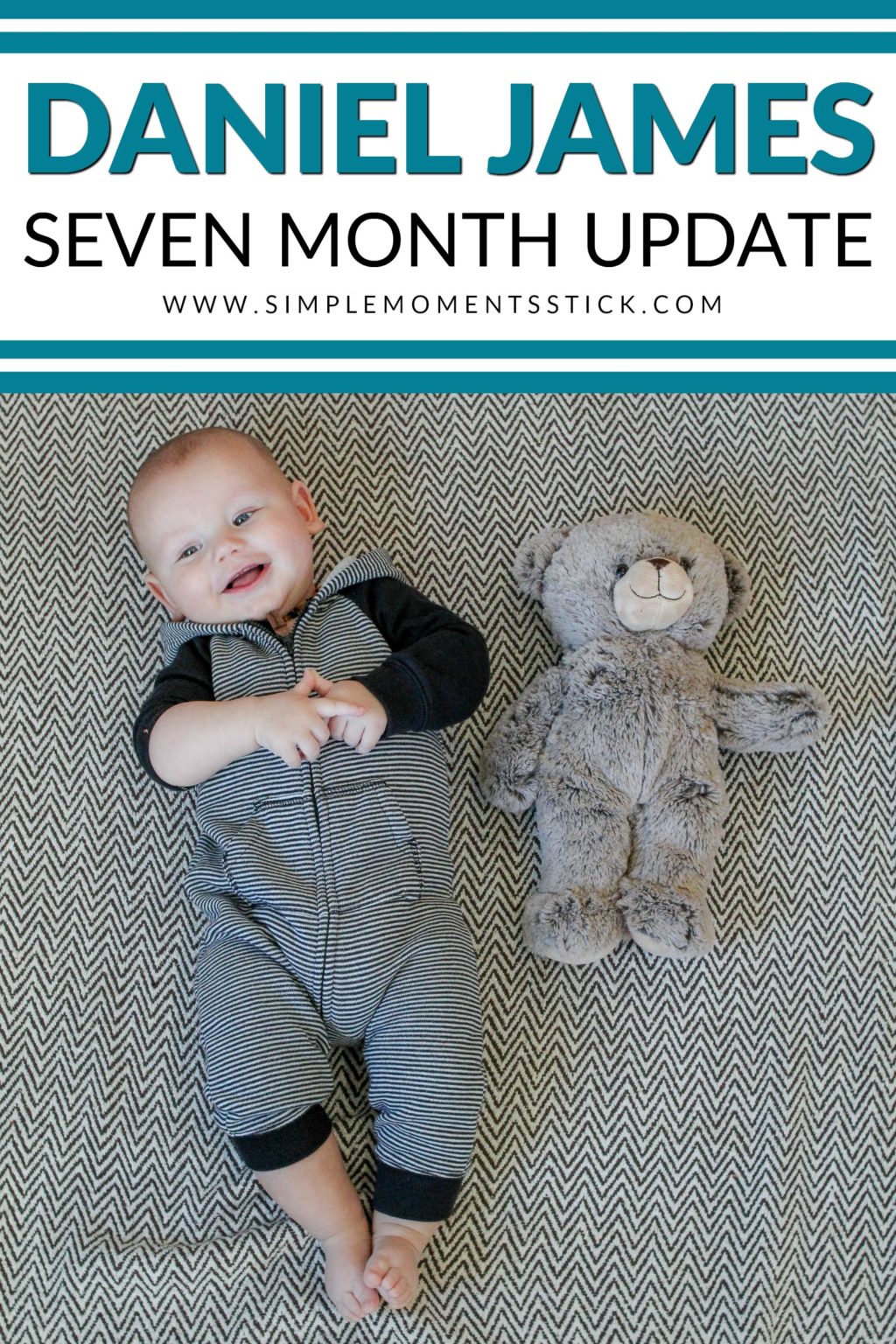 Alert… Alert…  We finally have a roller!  A few days before Daniel’s seven month birthday something clicked and, all of a sudden, he became a rolling machine.  Of course, this machine can only roll one way so he gets onto his tummy and eventually gets angry until we roll him onto his back.  And then it happens again.  And again.  And again.  Anyone want to place bets on when he’ll learn to roll from his tummy to his back?

Although he’s not rolling both ways, sitting up is basically his favorite thing in the world.  He’ll sit there for half an hour or longer – playing with toys, looking around, giggling.  All the things.  Eventually he falls over so we have to make sure he’s on a soft landing.  We’re trying to teach him to catch himself with his hands before face planting but so far it hasn’t happened.

Three more teeth have broken through this month and he’s working on another two so it’s been drool central all month.  I’m thankful that he’s such a happy guy – even in the midst of teething.  Teething has made Daniel chew on absolutely EVERYTHING.  One of his favorite things to chew on is his socks.  We cannot keep a pair of socks on this kid!  I’ve been putting little moccasins on his feet (which he hasn’t figured out how to take off) over his socks so we can make sure to keep his feet warm.

Daniel is starting to have opinions on things and have specific items he wants.  He gets SO excited when we pull out his monkey pacifier toy and grabs it to bring it to his mouth.  He also LOVES his bouncer and get super happy when we’re putting him in it.

Well, I’m sure no one is surprised but Daniel has decided that he LOVES eating!  Little man chows down on whatever we offer him.  We’re huge fans of baby led weaning so he’s had avocados, bananas, apples, baby crackers, bread, green beans…  And so much more!  He isn’t too sure about pureed food and will spit about half a spoonful out with each bite.  It doesn’t matter the size of the bite.  Half is getting spit out.

Our little monkey is getting more and more comfortable going to other people and it’s so great!  He has gone from not even wanting Nate to hold him to letting pretty much anyone hold him.  Daniel is Mr. Friendly as he smiles and giggles and chatters to everyone.

Still smiley, giggly, happy, and content.  I’m thrilled that God gave me such a sweet kiddo!

Daniel is getting so expressive!  He is just barely starting to reach for things and people and getting better about being physically expressive about what he wants.

This months Daniel also started growling.  It’s basically the cutest thing and, since it makes his big brothers laugh, he does it all the time.

Still nothing to report!  I love being able to say that.

Well, for about a week this month Daniel slept through the night.  And then he decided sleeping through the night was for chumps and stopped.  The little punk.  He’s still going to be at around seven thirty and waking up at about seven thirty.  Even with one wake up a night, I’d say he’s doing great.

We’re still at three naps and he still is needing rocking most naps to get him to sleep.  His arms being free wakes him up so we are still tightly swaddling his arms and letting him suck on his pacifier to sleep.  It works so we’re not changing it…  Although now that he’s rolling we need to figure out what we’re going to do about the swaddling. 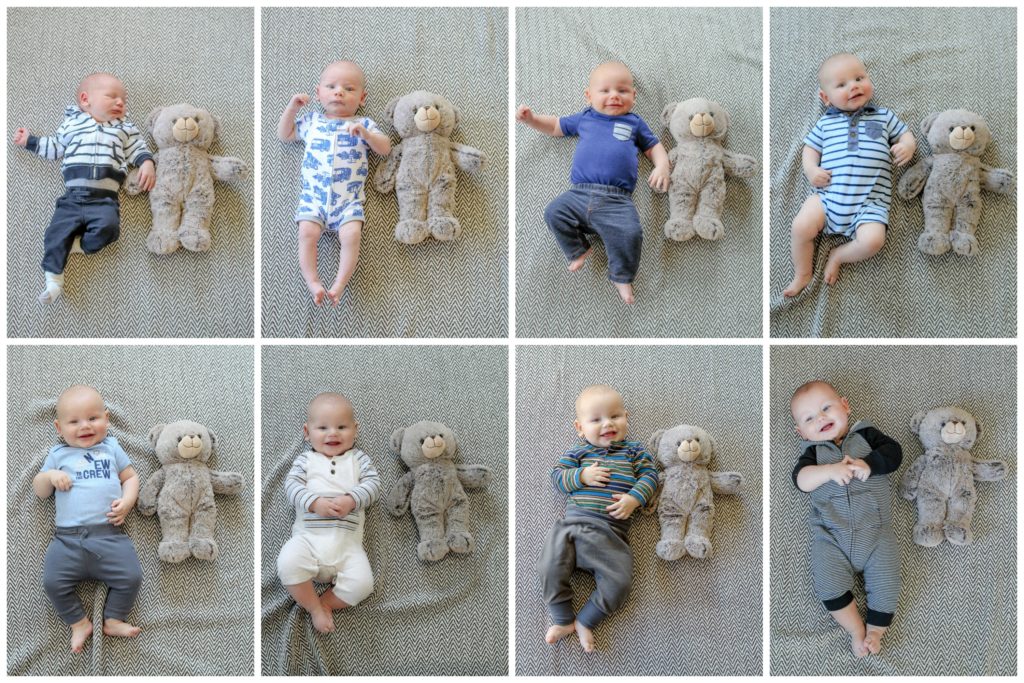